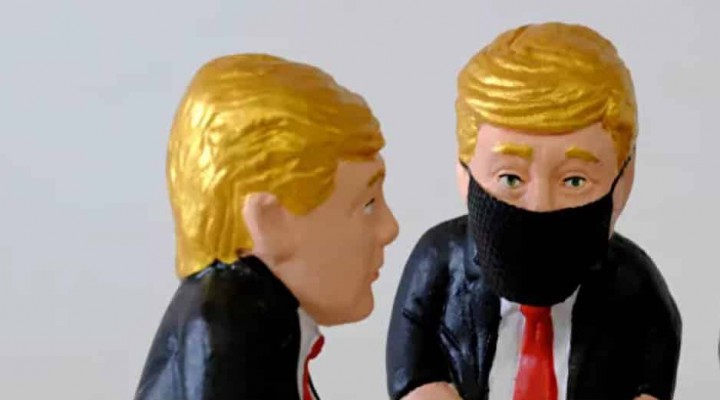 With ‘#DiaperDon’ tops in the nation, Mad King Donald may well see fit to find a way to kill even more Americans than his rage is taking now with COVID

VT: Everyone knows this was a rigged election. The GOP illegally purged voter rolls, destroyed mail boxes and processing equipment, closed polling stations, put out fake drop boxes to destroy ballots and has a long history of ‘tweaking’ voting machines, in rural areas of Ohio and Wisconsin.

Do note that the GOP made sure no rural votes were checked in Wisconsin, where in 2016, 110% of GOP voters went to the polls.

Raw Story: President Donald Trump’s refusal to accept the fact that he lost the 2020 presidential election was the focus of a Washington Post deep-dive published online Saturday night.

This @washingtonpost story is a remarkable piece of journalism. It chronicles Mr. Trump's descent into madness. America is fortunate to have survived this man — so broken and tortured, so damaged and dangerous, so cruel and detached from reality. https://t.co/FDYRt59J4s

The story, by Philip Rucker, Ashley Parker, Josh Dawsey and Amy Gardner, was titled, “20 days of fantasy and failure: Inside Trump’s quest to overturn the election.”

“The facts were indisputable: President Trump had lost. But Trump refused to see it that way,” the newspaper reported. “Sequestered in the White House and brooding out of public view after his election defeat, rageful and at times delirious in a torrent of private conversations, Trump was, in the telling of one close adviser, like ‘Mad King George, muttering, ‘I won. I won. I won.’’”

Trump may be unable to believe he lost because, in fact, he rigged the election. But maybe he miscalculated with only 10 million extra votes. So he now thinks he was out-cheated. In fact, Dems outvoted him and he wasn’t ready for it. Rudy is fool, period! https://t.co/lsWwTYEP1j

The report was based on “interviews with 32 senior administration officials, campaign aides and other advisers to the president, as well as other key figures in his legal fight.

“The 20 days between the election on Nov. 3 and the greenlighting of Biden’s transition exemplified some of the hallmarks of life in Trump’s White House: a government paralyzed by the president’s fragile emotional state; advisers nourishing his fables; expletive-laden feuds between factions of aides and advisers; and a pernicious blurring of truth and fantasy,” the newspaper reported. “Though Trump ultimately failed in his quest to steal the election, his weeks-long jeremiad succeeded in undermining faith in elections and the legitimacy of Biden’s victory.”  read more…