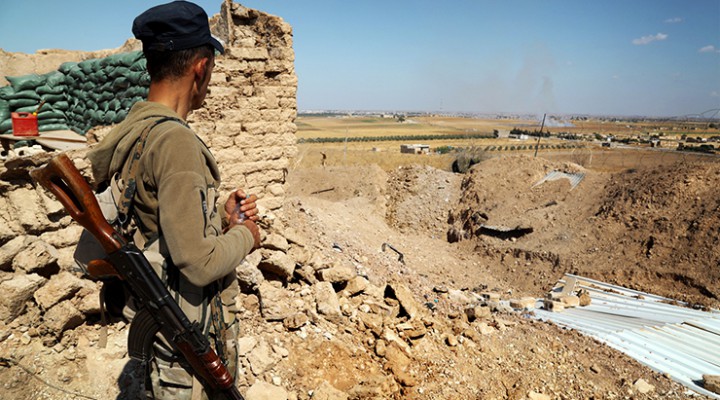 Two weeks into the Turkish offensive against the Kurds in Syria and everything is changing. Whatever the case, Syria is back, as the Syrian Arab Army races toward the Turkish border, at least in those areas where Turkey isn’t already engaged in intense combat with Kurdish forces.

Then, on October 16, Erdogan announced he would refuse to meet Vice President Pence, Secretary of State Pompeo and the current national security advisor, nobody bothers learning their names, they only last a few days. Erdogan says, “Trump or nothing.

We also know a visit to Moscow with Putin is scheduled, one or two days?

First of all, perceptions are, when war is involved, always misconceptions. When you win one war, you simply prepare for the next one and there is always a next one.

You know, the situation here reminds me in some ways of China after the US entered World War II. General “Vinegar Joe” Stillwell was tasked by President Roosevelt and Chairman JCOS Marshall to bring together Chaing and Mao in a unified front against the Japanese.

There had been cooperation inside China between Chaing and Mao after the death of Sun Yat Sen. Despite fake history, Chaing Kai-shek was certainly a communist, a devotee of Stalin but of a different breed and variety than Mao and his followers who the US termed as “agrarian reformers.”

The two great leaders came to blows in 1934 leading to the People’s Liberation Army fleeing across China in what was termed the Long March.

Japan took advantage of circumstances, having seized Manchuria in 1931 and began further incursions into mainland China.

In 1936, General Zhang Zueliang kidnapped Chaing and forced a detente that would allow joint opposition to Japan to take precedent over the ongoing civil war.

This is the situation Stillwell inherited when he entered Chunking, as it was spelled then, the inland provisional capitol of China.

Problem is, as America poured cash into Chaing’s war effort, none was spent fighting the Japanese and all was withheld to fight the next war, assuming the US would defeat Japan, an obvious inevitability.

Chaing’s wife was Mei-ling Soong. Her brother was TV Soong, the Rothschild banking partner that controlled much of the banking in the Far East. Thus, American cash intended to fight Japan in actuality bought much of General Motors though a complex system of leveraged stock purchases while more cash still was spent in Washington buying support for Chaing from among the political enemies of President Roosevelt, many of whom were at one-point strong supporters of Adolf Hitler.

One asks then, why the history lesson and how does this apply?

Well, let’s see, Turkey and Russia are close friends, and there are strong suspicions that Donald Trump pushed Turkey into the Russian camp. As to whether this policy serves America as well is yet to be seen.

If Trump is correct, and 20 years of deeply imbedded American policy has been poorly conceived and based on fake evidence and falsified intelligence, then derailing this policy with a pull out in Syria and realignment with Turkey may well force America to mend its ways despite efforts by the powerful Israel policy to keep America at war in the Middle East forever.

We then look at who the Kurds really are. Back in 2007, when Turkey invaded Iraq to confront the PKK, a communist Kurdish splinter group Turkey terms as terrorist, I sat down to what was a daily meal with Kurdish leaders for what turned out to be an education.

“We want Turkey to destroy the PKK. Look at the meal on the table. We have rice, we have fish from the Euphrates River for you, our honored guest, we have chicken, flown in from America on C130s, but little else, no olives, no oils to cook with, do you know why?

You see, nothing comes from Baghdad. Our trade is with Turkey and Syria but the road to Syria is closed and our border with Turkey is now a warzone where the PKK makes our lives impossible. We have no gasoline, no diesel fuel, we can’t repair our water system and sewers, our hospitals have no medicines, you see, not all Kurds are real Kurds, some are communists with their own loyalties and ideas.

We are building a nation and they would tear it down over politics, greed and fake idealism. We want our children to return from around the world now that Saddam is gone.”

The message, a simple one, the Kurds fighting Turkey weren’t the Kurds that made up the majority, the autonomous KRG in Iraq, nearly 9 million, with another 3 million or more in diaspora.

Moreover, as with China, it has been the job of the Kurds in Iraq to maintain a homeland, working with Baghdad, Washington, Ankara, Tel Aviv or whoever is necessary.

Additionally, and paraphrasing Donald Trump, the fight with ISIS was not a Kurdish fight but rather one with roots, at least inside Iraq, between former Sunni Baathists and the Shiite majority.

In time, as with China, the threat of ISIS became clear and a joint effort, with Iran taking on a significant role, much more significant than the US, deciding the conflict.

Then we look to Syria. The Turkish incursion just returned Syria’s water supplies, their oil fields, their best agricultural land. We also note that Trump’s statements that the Kurd’s didn’t have “clean hands” to an extent is based on the poor decision making of the socialist groups that made up the Kurdish forces allied to Washington and their desire to ethnically cleanse Syria’s Arabs, an effort that consumed much more time than fighting ISIS.

Yet we see the figure of 11,000 dead but little evidence of fighting, no video, no reporters on the ground except for a closely controlled “tame” few. The Kurdish and American war on ISIS is the least reported, worst documented war in world history.

What is evident, as is always the case, is that all parties are now realigning for a new war. What is clear is that the time of orchestrated “Arab Spring” conflicts and American mischief is at an end, leaving things as they were before 9/11, at the brink of a very different war with nothing changed.