The Dark Secrets Behind COVID-19 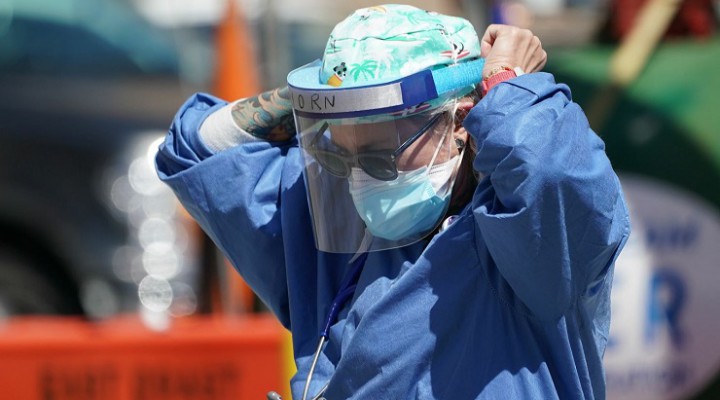 As the summer, Northern Hemisphere, come to a close, the Delta variant of COVID-19, and perhaps others, are sweeping the planet and, in particular, the United States. That nation is particularly vulnerable, not so much because of its inequities in providing healthcare to its poor as to its insane political environment.

But is it simply politics? With children, for the first time, beginning to fill hospitals and a flood of dead, not in their 80s but in their 30s and 40s, actual statistics have now become “classified.”

States like Florida, caught over and over faking statistics to save the political dreams of a corrupt governor, have now simply not just stopped counting but have criminalized investigative reporting as well.

But it doesn’t stop there, the CDC blocks reporting on age and race of the dead. The fact that the Delta variation brings about a more severe COVID and does it in hours, even minutes in some, killing more quickly than before is more than a suspicion but why is reporting this blocked in the United States?

Then, worst of all, is what is now clearly a coordinated effort to join longstanding anti-vaccine communities with anti-government extremists and white supremacists, all anti-science conspiracy addicts with flawed reasoning and emotional impediments.

This has given the US a “rebel army” who are seemingly unaware that their actions may well be engineered by certain forces to create and maintain a human petri dish capable of breeding and disseminating a “next wave” of vaccine resistant COVID that will kill us all.

Does this sound extreme to you? If it does, then it is likely you are not trained in psychological warfare where what we are seeing today, promoted quack treatments, disease denialism, vaccine rumors, all of it falls under “cover and deception” components of a “black op.”

Then, when we look at network TV and its role in spreading rumors, and the ties of media executives to extremist groups, we gain a perspective.

An even broader examination of the sources of the groups behind COVID denialism lead to other parallels, like the White Helmets, Bellingcat, the Syrian Observatory for Human Rights, the corrupt OPCW and a vast network of fake NGO’s that steal oil, move weapons and run the international heroin business.

The layer behind that leads to Washington “think tanks” and right wing political action committees and behind that, financial organizations, big pharma, and the social media giants that have been the allies of the disease from day one.

We thus return to the questions which are asked and yet “unasked.”

Then there is the biggest question of all:

Blaming China is not asking a question. Spreading internet hoaxes is not asking questions, it is simply derailing any real investigation by poisoning the water. This is what intelligence agencies do and what we see being done every day.

Only one nation in the world has stopped COVID and yet is in the middle of a raging epidemic at the same time. An examination of the antivaccine movement, the dark money behind it and those who may well have created COVID-19 raises questions.

There are plenty of reasons to question COVID-19, not whether it exists or even whether it was invented in a lab, there are bigger questions that may well be answered. Key to finding answers is tracing down those who lie, not just the endless flood of denialist news reports or the cabal of grifters and profiteers who make up the heart of the anti-vaccine movement.

Bitcoin has opened doors to dark funding, usually attributed to intelligence agencies with “Russia” being the go-to when blame is dished out.

Real counter-intelligence specialists, at one time had to profile traitors and terrorists. Now it is even suspected that much of humanity through exposure to social media and “device driven psychosis” has lost all capability of reason and discernment.

From Paul Rosenberg for Salon:

Political misinformation — whether “fake news,” conspiracy theories or outright lying — has often been attributed to widespread ignorance, even though there are numerous examples of 20th-century propaganda aimed at those most attentive to politics. Books like Edward S. Herman and Noam Chomsky’s “Manufacturing Consent” began to challenge that notion, as did the 1991 study of media coverage of the first Gulf War with the memorable bottom line, “the more you watch, the less you know.” In the age of social media, scholarly explanations have shifted to discussions of “motivated reasoning,” which could be defined by Paul Simon’s line from “The Boxer”: “A man hears what he wants to hear and disregards the rest.”

But the ignorance perspective has a deep hold on us because it appeals to the Enlightenment notion that we are motivated to pursue truth. We are “the thinking animal,” right? The important part of that expression may be “animal.” Human beings have an evolutionary history, and deception is commonplace in the animal world because it confers evolutionary advantage. There’s good reason to believe we’re not so different, other than the fact that humans are ultra-social creatures. In ancestral and evolutionary terms, being part of a successful social group was every bit as essential as food and water. So deception among humans evolved from group conflicts. That’s the thesis of a recent paper called “The Evolutionary Psychology of Conflict and the Functions of Falsehood” by the Danish political scientists Michael Bang Petersen and Mathias Osmundsen and American anthropologist John Tooby.

While the paper aligns with the “motivated reasoning” perspective, its focus goes deeper than the psychological mechanisms that produce and reproduce false information.

There are also those who see the root of this descent of mankind “back into the trees” as having an earlier source as part of a multi-generational effort, citing funding from both the Rockefeller and Ford Foundations, to being about what eugenicists back during the latter 19th and earliest parts of the 20th century failed at. We might also note that this effort we make reference to was why so many powerful Americans, names like Bush, Harriman, Ford, Rockefeller and Dupont threw their weight behind Adolf Hitler.

The eugenicists wanted America, and Europe as well, to be ruled by an oligarchy of self-appointed elites, really “robber barons,” and to be populated with mildly “Protestant” white people of sufficient intelligence and education to maintain a profitable industrialized society but to stay free of trade unions, socialist politics and, most of all “science.”

The political expression of the eugenicists dream is called “populism.” The embodiment of this effort would be Donald Trump.

Let me remind you that these are just theories, based on political research and, we hope, reasoned speculation.

It is not unreasonable to assume that the same people who caused so much death in the 20th century are doing it today as well as no one stopped them then and no one can stop them now.

As for investigation, let’s set down a few points early on, things that simply don’t fit in a rational world:

Then there are these oddities:

Something inexplicable is happening in America. A pandemic is raging, but not across the nation. No, the pandemic, ostensibly SARS COV 2 or “COVID-19” is filling hospitals and killing again but is also doing so in a very odd way.

That “odd way’ is not inexplicable. COVID is now a “disease of choice,” far more insidious than cigarettes, or the addictions, alcohol, and drugs. There is no “high” from not being vaccinated.

As we enter mid-August 2021, that civil war warned about under Trump has hit, a “soft” version. Talk about losing state borders, Florida, Alabama, Missouri, Louisiana, Texas, Arkansas, Mississippi, the heartland of “Dixie” is becoming a near reality.

In analysis, one has to discern whether these are simply “events spinning out of control” or the orchestrations of an agenda driven organization, perhaps the inheritors of the mantle of the eugenics movement that put so much money into Hitler’s rise to power or something else?

The rules are simple:

Yet those rules are never followed and those who ask relevant questions find themselves suffering the scrutiny and we might add retaliation of powerful US agencies.

Yet, we still ask: “Do we have proof of a conspiracy?”

They Killed People for Vaccine Profits

0 thoughts on “The Dark Secrets Behind COVID-19”