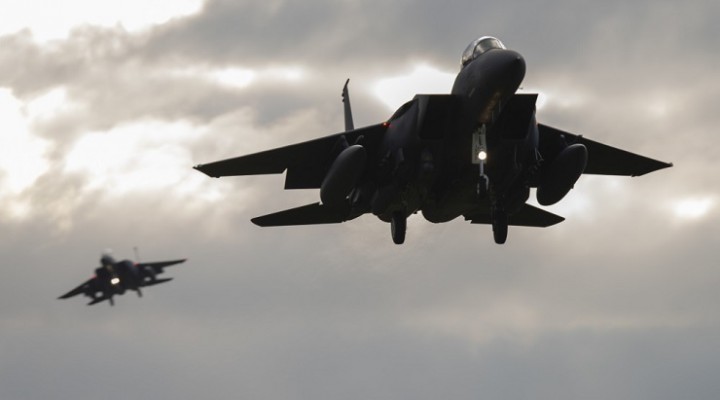 As June 2021 comes to a close, the US just finished bombing militia units, part of the Iraqi government’s military forces, along its border with Syria. The US mission against these forces deployed against a resurgent ISIS (banned in Russia) is, supposedly, in response to attacks on US forces in Iraq.

US forces in Iraq serve in that country without authorization, are in fact there illegally and have been ordered, over a year ago to leave by a vote of the Iraqi parliament.

Attacks on US forces there continue to be in retaliation for the killing of Iranian General Soleimani, on a diplomatic mission to Iraq and of Abu Mahdi al-Muhandis, the hero of Iraq’s war against ISIS.

The killings were done at the order of disgraced former US President Donald Trump who was responding to a request from Israel.

Let us also note that Iran, in direct retaliation, destroyed America’s largest base in Iraq with missiles the US was unable to intercept, missiles whose accuracy astounded the world.

This is just one minor gaff for the US. The impending Saudi defeat in Yemen, in a war two consecutive American administrations participated “secretly,” only makes things worse. Helping Saudi Arabia in a terror bombing war against civilians is bad enough but, from out outset, we all knew Saudi Arabia would lose and the US would eventually be blamed, not just for not winning the war but for pushing Saudi Arabia into it in the first place.

The huge credibility issue for the US will continue to be Syria. As long as Syria remains branded as a rogue state, the “rope-a-dope” war the US pretends to fight against ISIS will never be questioned.

It doesn’t take a genius to figure out that this week’s bombing attacks on Iraq’s militias along the Syria border is hardly retaliation for anything. To any adept observer it is simply a continuation of the US of the US Air Force as an arm of ISIS.

How many times have we seen it?

Oh, we don’t want to forget this one. An estimated 12,000 to 20,000 oil tankers serviced ISIS until Russian Aerospace Forces entered the war. The parades of tankers were often four abreast and up to 100 miles long, making up the largest physical feature on earth visible from the moon without a telescope.

The US with all their drones and spy satellites never saw them. Special Forces and Navy SEALs never saw them as well. But then, where do you get 12,000 trucks, mostly Peterbilt and Kenworth, now strewn as rusted wreckage across swaths of Syria and Iraq? We know.

These trucks used to deliver fuel to gas stations across the US until they were purchased by contractors for the US Department of Defense, taken to the Port of Houston, and shipped to Jordan.

One might, as an aside, also ask how ISIS got 10,000 Toyota Tundra trucks, all modified as “technical” to carry heavy weapons. They are also strewn across Syria and Iraq.

While sanctions successfully block food and fuel from Syria, food and fuel needed to make up for shortfalls as Syria’s domestic supplies of both are stolen by the US, entire shiploads of military vehicles manage to sail the high seas with impunity, as though ISIS were a great naval power.

We are thus forced to make another point as well. How did 300,000 foreign fighters from China, Indonesia, Australia, Malaysia, Indonesia and even Europe get to Syria?

You can’t enter Turkey without a passport, visa and health certificate. Jordan is closed “tighter than a tick.” You can’t walk from Saudi Arabia unless you are a camel?

Moreover, no single Islamic male, or group of males, is allowed to pass though any airport, almost any airport on the planet, without passing a security interview or even detention.

Simply put, if you are an ISIS recruit, you just can’t get to Syria or Iraq whatsoever, not on foot, not by bus, not by ship and certainly not on an aircraft yet 300,000 did.

There are only 3 organizations in the world capable of tackling that issue. They are the CIA, the Mossad and MI6.

While we discuss oil, it is time we look at exactly how much oil we are talking about. Syria has oil, for sure, but nothing like Iraq. The Kirkuk Oil Field in Iraq is the largest in the world, capable of producing light sweet crude in unfathomable amounts.

It was this oil field, north of Baghdad, that produced the vast majority of the stolen oil that moved through Turkey and into the Baku-Ceyhan Israeli owned pipeline.

When one is running 20,000 trucks with stolen oil, one might think they are impossible to hide. The diesel fuel alone to power the trucks or feeding 20,000 drivers, consider the logistics of this?

Then, how do you get from Kirkuk to Western markets? From the UK Independent:

Russia has unveiled what it describes as proof that Turkish president Recep Tayyip Erdogan and his family have benefited from the illegal smuggling of oil from ISIS-held territory.

Moscow defence ministry officials released satellite images they claim shows columns of tanker trucks loading with oil at an installation controlled by ISIS in Syria, before crossing the border into Turkey.

The Russian defence ministry also alleged that the same criminal networks which were smuggling oil into Turkey were also supplying weapons, equipment and training to Islamic State and other Islamist groups.

Then we have this from December 2015, Global Research:

According to Russian Television on December 25th, Russian intelligence has counted “up to 12,000” tanker trucks filled with oil “on the Turkish-Iraqi border,” and “the final destination remains to be Turkey.” In addition, some of those trucks are still heading into Turkey from Syria, but their number is “decreased” because Russia’s Syrian bombing campaign, which started on September 30th, has, ever since they began bombing the oil trucks on November 18th, destroyed “up to 2,000” of those trucks, that were in Syria heading into Turkey.

Here was the shocking admission that was made by the US Defense Department’s press-spokesman at his 18 November 2015 presentation, in which he voluntarily acknowledged that, throughout all of the 14 months during which the US had been bombing in Syria and in Iraq, the US hadn’t previously destroyed any of the tens of thousands of oil tank-trucks that had been transporting ISIS’s stolen oil out from Iraq and from Syria — the stolen-oil sales that bring $2B per year into ISIS coffers.

In 1964 the US claimed North Vietnam had attacked American ships in the Tonkin Gulf. No one believed the US then and as investigations long since have proven the US fabricated the incident, the casus belli behind America’s biggest military debacle has long since been consigned to the “the whole thing never happened” file.

What else can be added to that file, the search for WMD’s after 9/11?

How about the mystery of Afghanistan, converting a drug free nation to the world’s largest opium, and later heroin supplier with an efficiency that would have wiped out COVID 19 in days.

What we know is this, the reputation and standing of the US as a force for peace or perhaps “international order” is based on the planet being overtaken with a pandemic of amnesia.

0 thoughts on “How Moral Weakness Doomed US Middle East Standing”