HOME / WORLD / How the ‘self licking ice cream cone,’ prolonged the 20-year war 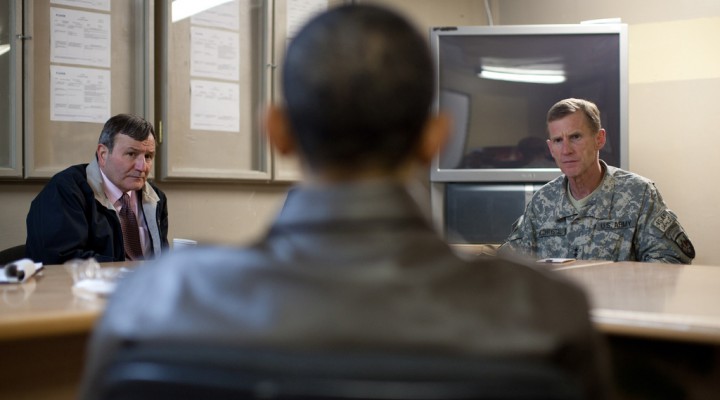 There is a rapidly growing political demand for making American officials accountable for the failures of the Afghanistan War, with a focus now on the military leadership and top generals’ role in keeping forces there for 20 years despite all the signs they knew the war was unwinnable.

One indication of a new political stage for the issue is the fact that Afghanistan War veterans Republican Joe Kent, running for a House seat in Washington state, and Democrat Lucas Kunce, running for a Senate seat in Missouri, have both called for such accountability, questioning the war’s continuation despite evidence it could not be won. Kunce has said that the “right call” would have been to get out of Afghanistan in 2002 or 2003.  Kent has charged that U.S. commanders in Afghanistan “have been lying for years, because they want to keep these wars going.”

This is the first time political candidates have suggested that the interests of senior military officials played a key part in prolonging the war in Afghanistan. The idea that national security institutions and their leaders pursue such parochial interests has been almost entirely ignored in past discussions, because mainstream foreign policy specialists have disapproved of it.

It wasn’t until the December 2019 release of the The Afghanistan Papers, a collection of confidential interviews with U.S. officials and other war insiders, that it was publicly revealed how official Wasington continued to push the war despite their private reservations that it could be won.

But Morton Halperin, who was a senior official at the Pentagon and on the White House National Security Council staff in four different administrations, beginning President Lyndon Johnson in 1966, documented the existence of such institutional interests as a fact of political life in his classic book “Bureaucratic Politics and Foreign Policy,” the second edition of which was published in 2006.

Halperin identified the three kinds of interests that shape the positions taken by government institutions on national security issues: 1) budgetary resources, 2) the missions and capabilities defining their institutional identities, and 3) their internal staff morale. Using this frame can go a long way toward explaining the decisions made by the military services and the Pentagon over the last 20 years.

The Taliban insurgency in Afghanistan that exploded between 2005 and 2006 and continued in grow rapidly through 2008, became a serious threat to the institutional interests of the military services and the Pentagon. The Joint Staff at the Pentagon led by former staff director Gen. Stanley A. McChrystal, who had been named commander of U.S. and coalition forces in Afghanistan in 2009, developed an entirely new campaign plan that became the basis for his request for at least 40,000 more troops.

But the new strategy was doomed by critical weaknesses, the most important of which was the fact — admitted in McChrystal’s own campaign plan — that “key groups” in the country were supporting the Taliban as the only alternative to an Afghan government and security forces that these groups viewed as dependent on widely-hated, abusive warlords. The new campaign plan against the Taliban thus represented a big risk of embarrassing failure for McChrystal, the Joint Chiefs, and the Pentagon.

Furthermore, unexpected developments in Iraq in 2008 powerfully influenced their institutional calculus. The Iraqi government unexpectedly demanded a complete withdrawal of all U.S. troops from Iraq by the end of 2011, and President George W. Bush, fearing an even faster timetable for withdrawal in an Obama administration, signed the agreement with the Iraqi government in October 2008 pledging to withdraw all combat troops by that 2011 deadline.

The troop withdrawal from Iraq made the continued U.S. counterinsurgency war against the Taliban the Army’s primary mission.  A 2009 Pentagon plan for restructuring the military budget around a “counterinsurgency” mission to justify a 14 percent increase in military spending was based on the assumption that U.S. forces, including the Army, would be deployed around the world in “stability operations” for the foreseeable future. But that plan for increased spending had originally assumed a semi-permanent U.S. military presence in Iraq and a smaller long-term presence in Afghanistan.

It was not only the Army’s interest in future funding, but also its choice of a central future military mission that was at stake in Afghanistan. The new Army Chief of Staff George W. Casey, who had previously been commander of U.S. forces in Iraq, predicted in a series of speeches in 2007 and 2008 that the military would be engaged with non- state actors and terrorist organizations for decades to come in what Casey called an “era of persistent conflict.”

As the U.S. troop presence in Iraq wound down, the Army’s role in Afghanistan became emblematic of its new mission and the rationale for continued high levels of budgetary support. Consequently, during and after the U.S. troop surge of 2009–2011, it proved impossible for the commander in Afghanistan to come up with accurate metrics that would show any real progress against the Taliban, as an NSC official later admitted. “The metrics were always manipulated for the duration of the war,” the NSC official said in a confidential interview made public by the Washington Post’s Afghanistan Papers in December 2019.

The use of phony metrics to sell the war was not new to cynical enlisted men in Afghanistan. They considered it one of the main features of what they called a “self-licking ice cream cone” or “SLICC”, which a popular glossary of military slang defined as any program that “appears to exist in order to justify its existence and produces irrelevant indicators of success.”

With institutional interests riding so heavily on the war in Afghanistan, it is not difficult to see how U.S. commanders in Afghanistan — all Army generals — had an overwhelming incentive to make false claims of progress in the war despite the clear evidence to the contrary. They were not only trying to make themselves look good; no doubt they believed, with good reason, that the continuation of the war itself depended on the confidence they were able to engender with those who held the purse strings in Congress.

The third primary institutional interest — internal institutional morale —was also well-served by the continuation of the war in Afghanistan, especially with regard to the officer corps of the Army, which dominated the U.S. military footprint. That was accomplished by rotating a large number of officers through the war for relatively brief periods, which meant that more of them could be promoted to higher ranks. This resulted in the U.S. Army having more four-star generals on active duty by 2020 than at any time since April 1945. As candidate Joe Kent put it succinctly, “Wars are good for generals. This is how they make their rank.”

That policy also resulted in cycling no fewer than eight U.S. generals through the position of commander of all U.S.-NATO forces in Afghanistan from 2003 through 2018. The military career of Gen. John W. Nicholson, Jr. was essentially shaped by the war: he served three different tours in Afghanistan for a total of five and a half years and retired as a four-star general in 2018 after two and a half years as the top commander.

The historical circumstances surrounding the decision to plunge ahead with war in Afghanistan and the deceptions used to support that decision, indicate that Halperin’s analysis of the three kinds of institutional interests that motivate policy can and should be used more widely for analyzing national security policy.  That analytical approach can provide a more realistic understanding of what has driven other historical and contemporary national security policies — and how they can best be challenged.

0 thoughts on “How the ‘self licking ice cream cone,’ prolonged the 20-year war”