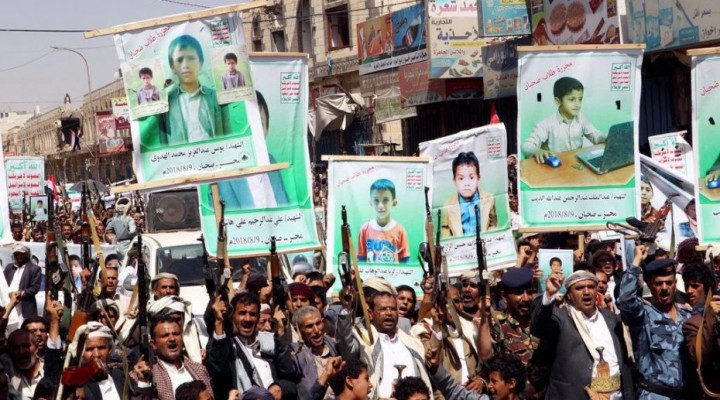 An official confirmation by the Trump administration of it holding discreet talks with Yemen’s Houthi rebels indicates a realization in Washington that its military intervention in the Arab country is an unsalvageable disaster requiring exit.

There are also reports of the Trump administration urging the Saudi rulers to engage with the Houthis, also known as Ansarullah, in order to patch up some kind of peace settlement to the more than four-year war. In short, the Americans want out of this quagmire.

Quite a turnaround. The US-backed Saudi coalition has up to now justified its aggression against the poorest country in the Arab region with claims that the rebels are Iranian proxies. Now, it seems, Washington deems the Houthi “terrorists” worthy of negotiations.

This follows a similar pattern in many other US foreign wars. First, the aggression is “justified” by moralistic claims of fighting “communists” or “terrorists” as in Vietnam and Afghanistan. Only for Washington, after much needless slaughter and destruction, to reach out to former villains for “talks” in order to extricate the Americans from their own self-made disaster.

Talks with the Houthis were confirmed last week by US Assistant Secretary of Near East Affairs David Schenker during a visit to Saudi Arabia.

“We are narrowly focused on trying to end the war in Yemen,” said Schenker. “We are also having talks to the extent possible with the Houthis to try and find a mutually accepted negotiated solution to the conflict.”

In response, a senior Houthi official Hamid Assem was quoted as saying: “That the United States says they are talking to us is a great victory for us and proves that we are right.” However, he declined to confirm or deny if negotiations were being held.

You have to almost admire the effrontery of the American government. Notice how the US diplomat says “we are focused on ending the war” and “a mutually acceptable solution”.

As if Washington is some kind of honest broker trying to bring peace to a country stricken by mysterious violence.

The war was launched by the US-backed Saudi coalition, including the United Arab Emirates, in March 2015, without any provocation from Yemen. The precipitating factor was that the Houthis, a mainly Shia rebel group aligned with Iran, had kicked out a corrupt Saudi-backed dictator at the end of 2014. When he tucked tail and fled to exile in Saudi capital Riyadh, that’s when the Saudis launched their aerial bombing campaign on Yemen.

The slaughter in Yemen over the past four years has been nothing short of a calamity for the population of nearly 28 million people. The UN estimates that nearly 80 per cent of the nation is teetering on hunger and disease.

A UN report published last week explicitly held the US, Britain and France liable for complicity in massive war crimes from their unstinting supply of warplanes, munitions and logistics to the Saudi and Emirati warplanes that have indiscriminately bombed civilians and public infrastructure. The UN report also blamed the Houthis for committing atrocities. That may be so, but the preponderance of deaths and destruction in Yemen is due to American, British and French military support to the Saudi-led coalition. Up to 100,ooo civilians may have been killed from the Western-backed blitzkrieg, while the Western media keep quoting a figure of “10,000”, which magically never seems to increase over the past four years.

Several factors are pressing the Trump administration to wind down the Yemen war.

The infernal humanitarian conditions and complicity in war crimes can no longer be concealed by Washington’s mendacity about allegedly combating “Iran subversion” in Yemen. The southern Arabian Peninsula country is an unmitigated PR disaster for official American pretensions of being a world leader in democratic and law-abiding virtue.

When the American Congress is united in calling for a ban on US arms to Saudi Arabia because of the atrocities in Yemen, then we should know that the PR war has been lost. President Trump over-ruled Congress earlier this year to continue arming the Saudis in Yemen. But even Trump must at last be realizing his government’s culpability for aiding and abetting genocide is no longer excusable, even for the most credulous consumers of American propaganda.

After four years of relentless air strikes, which has become financially ruinous for the Saudi monarchy and its precocious Crown Prince Mohammed bin Salman, who conceived the war, the Houthis still remain in control of the capital Sanaa and large swathes of the country. Barbaric bombardment and siege-starvation imposed on Yemen has not dislodged the rebels.

Not only that but the Houthis have begun to take the war into the heart of Saudi Arabia. Over the past year, the rebels have mounted increasingly sophisticated long-range drone and ballistic missile attacks on Saudi military bases and the capital Riyadh. From where the Houthis are receiving their more lethal weaponry is not clear. Maybe from Lebanon’s Hezbollah or from Iran. In any case, such supply if confirmed could be argued as legitimate support for a country facing aggression.

No doubt the Houthis striking deep into Saudi territory has given the pampered monarchs in Riyadh serious pause for thought.

When the UAE – the other main coalition partner – announced a month ago that it was scaling back its involvement in Yemen that must have rattled Washington and Riyadh that the war was indeed futile.

The defeat is further complicated by the open conflict which has broken out over recent weeks between rival militants sponsored by the Saudis and Emiratis in the southern port city of Aden. There are reports of UAE warplanes attacking Saudi-backed militants and of Saudi force build-up. A war of words has erupted between Riyadh and Abu Dhabi. There is strong possibility that the rival factions could blow up into a proxy war between Saudi Arabia and the UAE, supposed coalition allies.

Washington has doubtless taken note of the unstoppable disaster in Yemen and how its position is indefensible and infeasible.

Like so many other obscene American wars down through the decades, Washington is facing yet another ignominious defeat in Yemen. When the US starts to talk about “ending the war” with a spin about concern for “mutual peace”, then you know the sordid game is finally up.

A Saudi U-turn in Yemen?

Why Fake Alternative Media is So Dangerous (a rant)

0 thoughts on “Yemen: Another Shameful US Defeat Looms”