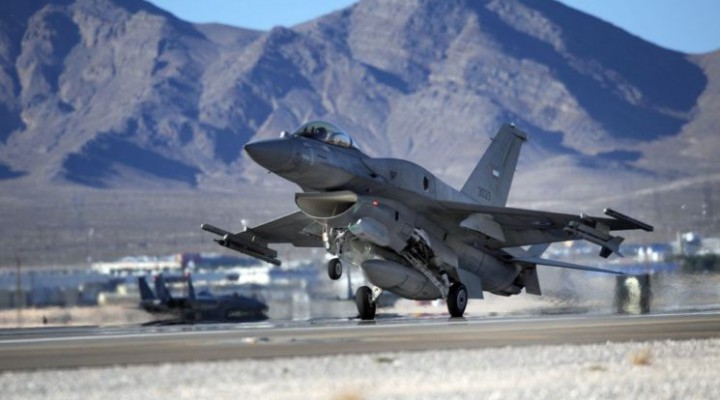 The surprise pullout of troops and warplanes from Yemen by the United Arab Emirates seems to be caused by the UAE redeploying forces at the behest of the United States in order to ramp up military pressure on Iran.

The surprise pullout of troops and warplanes from Yemen by the United Arab Emirates has been interpreted as a “peace move”, or at least a tacit admission of defeat. But, more plausibly, the timing of the withdrawal seems more to do with the UAE redeploying forces at the behest of the United States in order to ramp up military pressure on Iran.

The UAE has been a major actor in the US-backed Arab military coalition, along with Saudi Arabia, which has been waging a war in Yemen for the past four years to oust the Houthi rebel government in Sanaa. The Emiratis and Saudi Arabia want to reinstall an exiled clique which the Houthis kicked out of Yemen at the end of 2014. The US, Britain and France have backed the anti-Houthi coalition with massive arms supplies and logistics for a relentless air war campaign.

Despite the relative lack of Western media coverage of the conflict, Yemen has become widely seen as a horrendous humanitarian disaster. Nearly half its population of 24 million are suffering from critical food and water shortages. The Western-backed coalition has also been blamed for war crimes from indiscriminate air strikes on civilian centers. The war has been described as an “un-winnable quagmire” for the Saudis and Emiratis, not unlike Vietnam was for the Americans.

So, when an Emirati official was quoted last week as saying the withdrawal from Yemen was motivated by bolstering a United Nations-sponsored peace plan, a more skeptical reading would be that the UAE simply wants to get out of a futile and costly war. Thus the move is less about peace and more about saving face for the Emiratis. But there also seems to be a bigger geopolitical picture concerning US designs to confront Iran.

It is reported that the Saudis are not happy about the Emiratis turning their back on active involvement in the war. Understandably too, because the Saudis will have to deploy more financial resources and forces to fill the gap left behind. The Yemen quagmire can only get deeper and more miserable for the Saudis. That suggests Riyadh is being left in the lurch.

Although the UAE is aligned with Saudi Arabia as part of the pro-US Gulf Arab monarchies, including Kuwait, Bahrain, Qatar and Oman, there are nevertheless petty rivalries for power and regional influence. Saudi Arabia is often resented for its overbearing dominance by the other smaller oil-rich emirates. The Saudi-UAE blockade on Qatar over the past two years is a case in point where the former pair are trying to put the latter in its place over perceived competitive interests.

The UAE rulers would appear to be closest to the hardline Wahhabi Saudis in terms of sharing a vehement hostility towards Shia Iran.

However, given that the impetuous Saudi Crown Prince Mohammed bin Salman is reckoned to have launched the war in Yemen based on an ill-thought-out campaign that was supposed to last for a few weeks, not years, it can be surmised that the Emiratis would only be too glad to let the young royal rue the day for his rash egotism.

In addition, the Emiratis seem to be positioning themselves for a greater regional role by extricating their forces from Yemen. This is less about bolstering peace in Yemen and more about giving itself a freer hand to gain dominance at Saudi expense.

On the news of the pullout last week, the US-based think tank ran an article with this telling headline: ‘Yemen: The UAE Trades Its Involvement in the Yemen Conflict for a Stronger Regional Posture’.

The timing is also significant. Not coincidently, it seems, the UAE announced withdrawal comes just as the US is pushing for a new naval coalition force to deploy in the Persian Gulf and Red Sea, purportedly to “counter Iranian aggression” and to “safeguard” international commercial shipping.

Mike Milley, the nominated top US General who is due to take over from Major General Joseph Dunford as Chairman of the Joint Chiefs of Staff, told a Senate confirmation hearing panel last week that the proposed coalition is scheduled to shape up in the “next couple of weeks”.

The Pentagon will have overall command of the naval forces, which will comprise only Washington’s regional allies. The move seems to be a reckless escalation of US-led military forces in the Persian Gulf amid already-combustible tensions with Iran.

A string of sabotage incidents on oil tankers in the Gulf carried out by unknown assailants, as well as a shoot-down of a US spy drone by Iran, strongly suggests that the Trump administration is secretly planning for a military confrontation with Tehran. The Trump White House has said it doesn’t want war nor is seeking regime change in Iran, but all the indicators point to the opposite conclusion.

If the US is indeed lining up for a military strike on Iran, then it would require its regional allies to be mobilized as part of a coalition. The naval coalition being proposed by the Pentagon thus takes on a sinister implication, in spite of the apparently benign “freedom of navigation” claims invoked as its purpose.

The abrupt pullout of UAE forces from Yemen may therefore be less about giving peace a chance, or even about cutting and running from a futile, un-winnable war. Instead, the Emiratis seem to be reconfiguring their forces do Washington’s bidding for a war on Iran.

After all, the Gulf Arab propaganda claims that the Houthi rebels in Yemen are “Iranian proxies”. For them, Yemen has always been about challenging Iran. Pulling forces to redeploy with the US in the Gulf may seem a more appealing, if high-risk, direct way to confront Iran. Furthermore, the UAE gets to play top dog over their petty Saudi rival in pleasing Uncle Sam.

Unfortunately, peace is not about to break out in Yemen because of the UAE military pullout. More ominously, the wider reconfiguration of forces in the region could mean a much bigger and disastrous war breaking out with Iran.

0 thoughts on “UAE Pullout From Yemen Less About Peace, More About War With Iran”