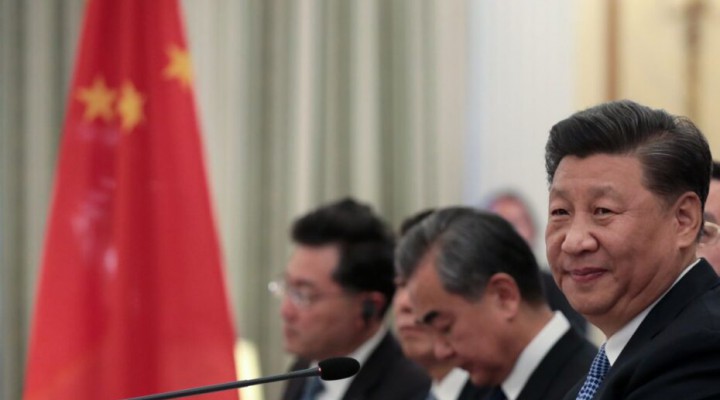 The mere playing with war rhetoric is reprehensible and speaks of American desperation to salvage its diminishing global power.

In an extraordinarily provocative move, the U.S. foreign policy establishment has warned China that it is pushing for a more aggressive strategy – all the way up to instigating war. In a tome-like article published by the Washington-based Atlantic Council, there are foreboding demands for numerous “red lines” to confront China over.

Entitled ‘The Longer Telegram’ the article is a strange throwback to Cold War thinking. It is ostentatiously mimicking the famous document authored by George Kennan in 1946 who as a U.S. diplomat based in the Moscow wrote ‘The Long Telegram’ prescribing a hostile strategy of containment against the Soviet Union.

Thus the Atlantic Council is billing the recent article as a seminal historical contribution to formulating U.S. policy towards China, and one that is more bellicose and “comprehensive”.

Moreover, the author’s identity is not revealed, going simply by the description of a “former senior government official” with expertise on U.S.-China relations. That is odd. It suggests that the author is close to the new Biden administration, if not a member of it in a new capacity such as national security advisor or intelligence chief.

The timing of the publication would indicate it has the purpose of forming the Biden administration’s policy. Many of its talking points and themes, such as defining China as the “main threat” to the U.S. and working more closely with allies to confront China, have been reiterated elsewhere by the Biden administration. But rather than making it an explicit U.S. policy document, the tactical choice appears to have been to publish it through the Atlantic Council think-tank since that would give a preferred nuanced distance from the White House. It’s more of a discreet telegram.

And a superficial distance from the White House is required because what the Atlantic Council article proposes is extraordinarily provocative.

For a start it denigrates China’s President Xi Jinping in the most pejorative terms unbecoming of diplomatic norms. It proposes that “U.S. strategy must remain laser-focused on Xi, [and] his inner circle.”

The document states: “At home, Xi has returned China to classical Marxism-Leninism and fostered a quasi-Maoist personality cult, pursuing the systematic elimination of his political opponents… Xi is no longer just a problem for U.S. primacy. He now presents a serious problem for the whole of the democratic world.”

What the Washington policy elite are explicitly calling for is “regime change” in Beijing by aiming to destabilize the senior government.

This marks an unprecedented notice of increased hostility towards the Chinese leadership. This is taking past U.S. aggression under Obama and Trump to a whole new level.

What’s even more alarming is the Atlantic Council article sets out numerous “red lines” which could trigger military confrontation.

These red lines include “major hostile action” by China in the South China Sea, or an attack on Taiwan, or cyberattacks against the United States. This is alarming because these actions are being exacerbated by the U.S. itself. Since Biden took office last month, his administration has sent two navy carrier strike groups to conduct exercises in the South China Sea, which Beijing has condemned. A U.S. warship also recently passed through the Strait of Taiwan. As for cyberattacks, they can be easily fabricated and falsely attributed by U.S. intelligence agencies.

At one point the Atlantic Council article notes: “U.S. strategy must understand that China remains for the time being highly anxious about military conflict with the United States, but that this attitude will change as the military balance shifts over the next decade. If military conflict were to erupt between China and the United States, and China failed to win decisively, then – given the party’s domestic propaganda offensive over many years proclaiming China’s inevitable rise – Xi would probably fall and the regime’s overall political legitimacy would collapse.”

This last paragraph is a clear sign that Washington planners are actually considering a preemptive war against China in which the latter “failed to win decisively” thereby precipitating the fall of President Xi.

The reaction from China has been surprisingly reserved. Beijing condemned the American Cold War mentality but seemed to avoid condemning what are clearly U.S. threats of war. One analyst for Global Times speculated that the Atlantic Council article was a “remnant from the Trump administration”. Such thinking is dangerously complacent. For the evidence points to the article being an expression of policy formulation by the Biden administration.

It is notable in a recent interview with CBS, President Biden sounded remarkably disrespectful towards his Chinese counterpart. Biden said he hadn’t yet spoken directly with Xi since the U.S. presidential inauguration ceremony nearly three weeks ago. Such an absence of communication seems to be a calculated snub from Biden and his policy planners in Washington which is in total keeping with the proposed strategy outlined in the Atlantic Council article to “laser-focus” on denigrating Xi and his leadership.

Here’s another notable oddity. While Biden has yet to contact Xi, the American leader held a phone call with Russian President Vladimir Putin the day after his inauguration. In the Atlantic Council article, the author proposes: “Dividing Russia from China… is critical.” It calls for “stabilizing relations with Russia” and the United States.

In the 1970s, it was the other way around. U.S. policy then, first under Richard Nixon and later successors, was all about drawing China away from the Soviet Union because Moscow was perceived as the main threat to American hegemony.

Now, as the Biden administration and other Washington planners assert over and over, it is Beijing that is perceived as the principal challenger to the waning U.S. global empire. But the same tactic of divide and rule is at play.

Officially, the Biden White House says it has yet to formulate definitive policies on relations with China or Russia. But the vibe and tone of the Atlantic Council article has Team Biden’s fingerprints all over it – indicating that it is preparing to take a reckless aggressive course toward China. The Trump administration – which was brazenly antagonistic to China – is criticized for lacking “comprehensive strategy”. That’s Orwellian euphemism for the Biden administration telegramming the threat of much more confrontational policy.

It may all just be reckless rhetoric by Washington’s imperial planners. Nevertheless, the mere playing with war rhetoric is reprehensible and speaks of American desperation to salvage its diminishing global power.

0 thoughts on “Washington Telegrams China of Red Lines and Aggression”