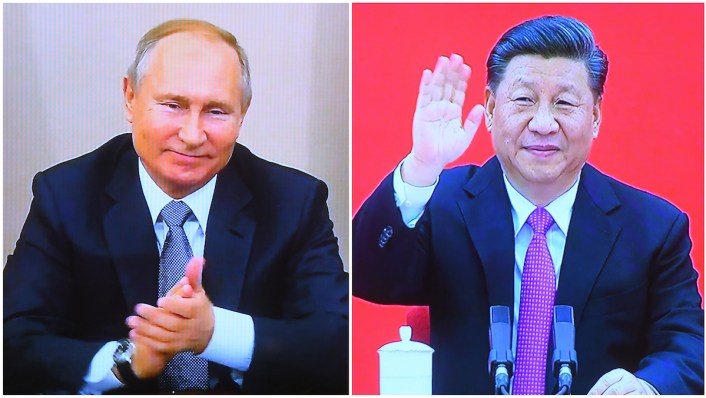 Still, corporate and political so-called “leaders” will continue to wax lyrical about the Fourth Industrial Revolution – or its mild spin-offs such as Build Back Better, the favorite slogan of the new White House tenants.

The WEF co-sponsors – from the UN and the IMF to BlackRock, Blackstone and the Carlyle Group – will continue to expand their synchronicity with Lynn Forester de Rothschild and her corporate-heavy Council for Inclusive Capitalism with the Vatican – pop Pope Francis at the helm.

And yes, they accept Visa.

Predictably, the two really crucial events at Davos received minimal or non-existent coverage across the wobbly West: the speeches by President Xi and President Putin.

We have already highlighted Xi’s essentials. Aside from arguing a powerful case for multilateralism as the only possible road map to deal with global challenges, Xi stressed nothing substantial may be achieved if the inequality gap between North and South is not reduced.

The best in-depth analysis of Putin’s extraordinary speech , hands down, was provided by Rostislav Ishchenko, whom I had the pleasure to meet in Moscow in 2018.

Ishchenko stresses how, “in terms of scale and impact on historical processes, this is steeper than the Battles of Stalingrad and Kursk combined.” The speech, he adds, was totally unexpected, as much as Putin’s stunning intervention at the Munich Security Conference in 2007, “the crushing defeat” imposed on Georgia in 2008, and the return of Crimea in 2014.

Ishchenko also reveals something that will never be acknowledged in the West: “80 people from among the most influential on the planet did not laugh in Putin’s face, as it was in 2007 in Munich, and without noise immediately after his open speech signed up for a closed conference with him.”

Putin’s very important reference to the ominous 1930s – “the inability and unwillingness to find substantive solutions to problems like this in the 20th century led to World War 2 catastrophe” – was juxtaposed with a common sense warning: the necessity of preventing the takeover of global policy by Big Tech , which “are de facto competing with states”.

Xi and Putin’s speeches were de facto complementary – emphasizing sustainable, win-win economic development for all actors, especially across the Global South, coupled with the necessity of a new socio-political contract in international relations.

This drive should be based on two pillars: sovereignty – that is, the good old Westphalian model (and not Great Reset, hyper-concentrated, one world “governance”) and sustainable development propelled by techno-scientific progress (and not techno-feudalism).

So what Putin-Xi proposed, in fact, was a concerted effort to expand the basic foundations of the Russia-China strategic partnership to the whole Global South: the crucial choice ahead is between win-win and the Exceptionalist zero-sum game.

The Xi-Putin road map is already being examined in excruciating detail by Michael Hudson, for instance in this essay based on the first chapter of his upcoming book Cold War 2.0: The Geopolitical Economics of Finance Capitalism vs. Industrial Capitalism. Many of these themes have been elaborated in a recent conversation/interview between Michael and myself.

The whole Global South is figuring out how the contrast could not be starker between the American model – neoliberalism redux, in the form of turbo-financialization – and East Asia’s productive investment in industrial capitalism.

Alastair Crooke has outlined the dubious “appeal” of the American model, including “asset markets…severed from any connection to economic returns”; markets that “are not free, but Treasury managed”; and “enterprise capitalism…morphed into monopolistic oligarchism”.

The glaring counterpoint to Xi-Putin at Davos has been a so-called “strategy paper” released by NATO think tank The Atlantic Council, pompously titled The Longer Telegram, as if this was as relevant as George Kennan’s 1946 Long Telegram that designed the containment of the USSR.

Well, the least one can say to the anonymous “former senior government official with deep expertise” on China is, “Mr. Anonymous, You’re No George Kennan”. At best, we’re dealing with a sub-Mike Pompeo with a massive hangover.

Amidst a tsunami of platitudes, we learn that China is a “revisionist power” that “presents a serious problem for the whole of the democratic world”; and that the Chinese leadership better get its act together and operate “within the US-led liberal international order rather than building a rival order”.

The usual toxic mix of arrogance and condescension totally gives away the game, which boils down to “deterring and preventing China from crossing US red lines”, and applying good, old Kissingerian Divide and Rule between Russia and China.

Oh, and don’t forget regime change: if the “strategy” works, “Xi will in time be replaced by the more traditional form of Communist Party leadership.”

If this is what passes for intellectual firepower in Atlanticist circles, Beijing and Moscow don’t even need enemies.

The Asian center of gravity

Martin Jacques, now a visiting professor at Tsinghua University and a senior fellow at the China Institute of Fudan University, is one of the very few Westerners who actually has real “expertise” on China.

He’s now focusing on the main battlefield in the evolving US-China clash: Europe. Jacques notes that, “the trend toward a growing distance between Europe and the US will be slow, tortuous, conflict-riddled, and painful.” We are now “in new territory. American decline means that it has increasingly less to offer Europe.”

As an example, let’s jump cut to a distinct feature of the BRI/New Silk Roads and one of its key hubs, the China-Pakistan Economic Corridor (CPEC): the Digital Silk Road .

In partnership with Huawei, fiber optic cable is being laid out all across Pakistan – as I saw for myself when I traveled the Karakoram Highway, the northern part of CPEC. This fiber optic cable all the way from the Karakoram to Balochistan will link with the Pakistan-East Africa Connecting Europe (PEACE) submarine cable in the Arabian Sea.

The end result will be high-end connectivity between a host of BRI-participating nations and Europe – as the Mediterranean section is already being laid, running from Egypt to France. Before the end of 2021, the whole 15,000 km-long fiber optic cable will be online.

This shows that BRI is not as much about building roads, dams and high-speed rail networks but especially the Digital Silk Road, intimately connected with state of the art Chinese cyber-tech.

It’s no wonder Jacques fully understands how “the gravitational pull of China, and Asia more generally, is drawing Europe eastward. Nothing illustrates this phenomenon better than the China-proposed Belt and Road Initiative.”

In ReOrient: Global Economy in the Asian Age, an extraordinary book published way back in 1998, the late, great Andre Gunder Frank exhaustively smashed Eurocentrism, demonstrating how the rise of the West was a mere historical blip, and a consequence of the decline of the East around 1800.

Now, only two centuries later, the planet’s center of gravity is back in Asia, as it’s been for most of recorded history. The fate of those blind to the evidence and unable to adapt is to telegram themselves to utter irrelevance.

0 thoughts on “Xi, Putin make the case for win-win vs zero-sum”