HOME / WORLD / Head of Strategic Command: US Must Prepare for “Very Real Possibility” of Nuclear War With China 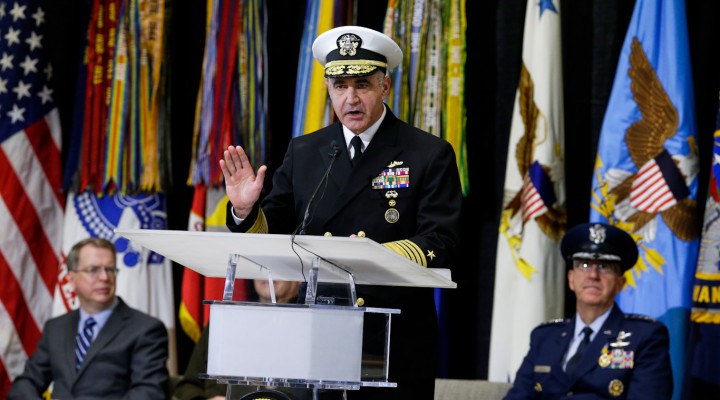 In an era when international cooperation in the face of pandemics and climate change is essential, the world appears to be racing towards a new Cold War, and unfortunately, few except the military top brass are talking about it.

MPN- Writing in the U.S. Naval Institute Journal, Admiral Charles A. Richard warned that the military must “consider the possibility of great power competition, crisis, or direct armed conflict with a nuclear-capable peer” and update and modernize its approach to its two principal adversaries.

“There is a real possibility that a regional crisis with Russia or China could escalate quickly to a conflict involving nuclear weapons,” he wrote, demanding that the United States “prepare for the conflict we prefer, instead of one we are likely to face.”

Richard accused the Chinese of “mak[ing] technological leaps in capabilities in every domain” and Russia of “aggressively modernizing its nuclear forces.” He concluded that “the probability of nuclear use is low, but not impossible, particularly in a crisis and as our nuclear-armed adversaries continue to build capability and exert themselves globally,” and that the U.S. risks suffering “embarrassment” or worse if they do not act.

The admiral’s words closely echo a recent report from the Atlantic Council — a body that is filled with top American generals and closely linked to NATO. The council advised President Biden to draw a number of “red lines” around China, past which the U.S. would respond militarily. These included virtually any Chinese military actions in the South China Sea, cyberattacks on its neighbors, or even a North Korean strike on its adversaries. Any backing down from the brink, the council insisted, would mean national “humiliation” for the United States.

In recent months, the United States has taken a number of provocative military actions on China’s doorstep. In July, it conducted naval exercises in the South China Sea, with warships and naval aircraft spotted just 41 miles from the coastal megacity of Shanghai, intent on probing China’s coastal defenses. In December, it flew nuclear bombers over Chinese vessels close to Hainan Island. Last year Florida Senator Rick Scott stated that every Chinese national in the U.S. was a communist spy and should be treated with extreme suspicion.

Scott’s words are part of a broader propaganda war against China. In 2011, the American public’s view of the country was strongly favorable. However, due in no small part to fearmongering stoked by politicians and media pundits, nearly three-quarters of Americans (a historic high) hold negative views of China, with less than one-quarter positively rating the country, according to Pew Research.

It is a similar story with Russia. During the 2012 presidential debates, Republican nominee Mitt Romney was relentlessly mocked for his position that Russia was an adversary. “The 1980s are now calling to ask for their foreign policy back, because the Cold War’s been over for 20 years,” President Obama famously quipped. Since then, however, the number of Americans with a favorable view of Russia has dropped from an all-time high in 2011 of 49% to just 19% today.

Perhaps due to increased nationalistic sentiment, little attention has been paid to the Trump administration’s decisions to back out of every international anti-nuclear weapons deal the U.S. had signed, including the Intermediate Range Nuclear Forces (INF) and the Open Skies treaties as well as the New START agreement.

Last week, the Bulletin of Atomic Scientists reset their famous Doomsday Clock — an estimation to how close the world is to armageddon — to just 100 seconds to midnight, the closest, in their estimation, we have ever been to complete destruction. Explaining their decision, the committee, which includes 13 Nobel laureates, stated that nuclear nations have,

Ignored or undermined practical and available diplomatic and security tools for managing nuclear risks. By our estimation, the potential for the world to stumble into nuclear war—an ever-present danger over the last 75 years—increased in 2020.”

One piece of good news came down on Wednesday when the White House announced it had renewed the New START treaty — a deal which limits the number of nuclear missiles the U.S. and Russia can possess. However, on Iran, Venezuela, China, Afghanistan, and other nations, Biden appears to be maintaining Trump’s aggressive policies.

The outcome of any nuclear confrontation has been well understood by war planners for over half a century. In his book “The Doomsday Machine: Confessions of a Nuclear War Planner” former military analyst and whistleblower Daniel Ellsberg explained that his team calculated that, in the event of a totally successful widespread American nuclear strike against the Soviet Union, with no retaliation whatsoever, at least 99% of the world’s population would die as a result. As he noted:

It is the smoke, after all (not the fallout, which would remain mostly limited to the northern hemisphere), that would do it worldwide: smoke and soot lofted by fierce firestorms in hundreds of burning cities into the stratosphere, where it would not rain out and would remain for a decade or more, enveloping the globe and blocking most sunlight, lowering annual global temperatures to the level of the last Ice Age, and killing all harvests worldwide, causing near-universal starvation within a year or two.”

In an era when international cooperation in the face of pandemics and climate change is essential, the world appears to be racing towards a new Cold War. Unfortunately, few except the military top brass are talking about it. Worse still, they seem to be almost delighted at the prospect.

0 thoughts on “Head of Strategic Command: US Must Prepare for “Very Real Possibility” of Nuclear War With China”