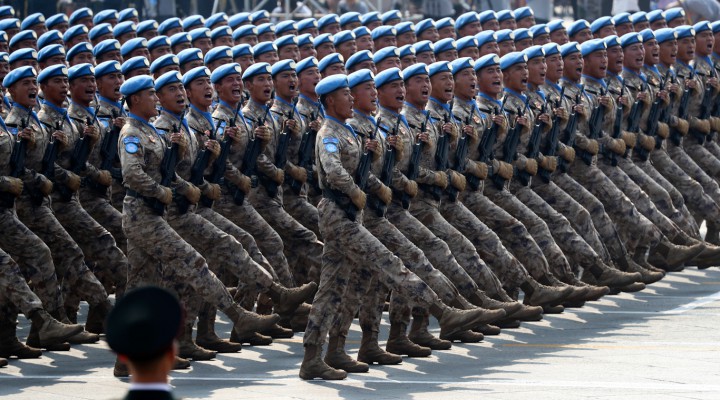 The report outlines a plan for the United States to pursue a China without Xi Jinping, with a weakened Communist Party, and operating in a region dominated by the US and its allies.
MPN- Influential D.C. think tank the Atlantic Council has printed a 26,000-word report laying out its strategy for combating China. Published anonymously, the report states that “the single most important challenge facing the United States” in the twenty-first century is China’s growth to rival their own power.

To do so, the report states that the U.S. must use “the power of its military,” the dollar’s role as the global reserve currency, and American control over technology and communication to suffocate the nation of 1.4 billion people. It advises President Biden to draw a number of “red lines” past which the U.S. would directly intervene (presumably militarily). These include Chinese attempts to expand into the South China Sea, an attack on the disputed Senkaku Islands, or moves against Taiwan’s independence. A North Korean strike on any of its neighbors would also necessitate an American response against China, the report insists, because “China must fully own responsibility for the behavior of its North Korean ally.” Any backing down from this stance, the council states, would result in national “humiliation” for the United States.

Perhaps most notably, however, the report also envisages what a successful American China policy would look like by 2050: “the United States and its major allies continue to dominate the regional and global balance of power across all the major indices of power;” and that head of state Xi Jinping “has been replaced by a more moderate party leadership; and that the Chinese people themselves have come to question and challenge the Communist Party’s century-long proposition that China’s ancient civilization is forever destined to an authoritarian future.” In other words, that China has been broken and that some sort of regime change has occurred.

The Atlantic Council is a NATO-offshoot organization funded by the U.S. and other allied governments, including the Gulf dictatorships. Among its largest corporate sponsors include weapons manufacturers like Raytheon, Lockheed Martin, Northrop Grumman, and Boeing. Its board of directors is full of high statespeople like Henry Kissinger, Colin Powell, and Condoleezza Rice as well as senior military figures such as retired generals Wesley Clark, David Petraeus, H.R. McMaster, James “Mad Dog” Mattis, Lt. General Brent Scowcroft and Admiral James Stavridis. At least seven former CIA directors are also on the board. Thus, the council could be said to represent the consensus opinion of the national security state.

The organization has been responsible for much of the most hawkish, bellicose rhetoric surrounding Russia and China for some time. For instance, it has put out a number of studies that claim that virtually every European political party outside the establishment beltway — from Labour and UKIP in the U.K. to Syriza and Golden Dawn in Greece and PODEMOS and Vox in Spain — are secretly controlled by Russia, functioning as the “Kremlin’s Trojan Horses.”

The council’s new anonymous report, named “the Longer Telegram,” is a direct reference to American diplomat George Kennan’s 1946 “Long Telegram.” Kennan’s report, sent from Moscow, argued that the U.S. should completely abandon its wartime alliance with the Soviet Union and immediately pursue a strategy of hostile “containment,” and is considered one of the founding documents of the Cold War. By consciously associating itself with Kennan, the Atlantic Council is implicitly heralding the arrival of a new global conflict with China.

Kennan is appreciated among historians for being one of the most straightforward talkers in the national security establishment. In 1948 he outlined what the U.S. position and interests were:

We have about 50% of the world’s wealth, but only 6.3% of its population…. In this situation, we cannot fail to be the object of envy and resentment. Our real task in the coming period is to devise a pattern of relationships which will permit us to maintain this position of disparity…We need not deceive ourselves that we can afford today the luxury of altruism and world-benefaction…We should cease to talk about vague and… unreal objectives such as human rights, the raising of the living standards, and democratization. The day is not far off when we are going to have to deal in straight power concepts. The less we are then hampered by idealistic slogans, the better.”

Throughout 2020, President Biden’s team quietly stated that their entire industrial and foreign policy would revolve around “compet[ing] with China,” with their top priorities being “dealing with authoritarian governments, defending democracy and tackling corruption, as well as understanding how these challenges intersect with new technologies, such as 5G, artificial intelligence, quantum computing and synthetic biology.” The Trump administration had already begun a global campaign to damage Chinese giants like Huawei and TikTok. From his team’s statements, it appears likely that Biden will carry on its anti-Beijing stance.

However, many top officials in Washington see the prospect of a hot war with China as a distant one. “Most of the U.S.-China competition is not going to be fighting World War Three…It’s going to be kicking each other under the table,” one source told the Financial Times in May. Others argue for a worldwide culture war against Beijing, including the Pentagon commissioning “Taiwanese Tom Clancy” novels, intended to demonize China and demoralize its citizens, bombarding its people with stories of the deaths of their (only) children.

Whatever Washington decides to do, it appears that the groundwork has already been laid at home. Just three years ago, Americans had a neutral view of China (and nine years ago it was strongly favorable). Today, the same polls show that 73% of Americans dislike China, with only 22% holding a positive opinion of the country. Thus, it is far from clear that there will be much public pushback at all to a coming second Cold War.