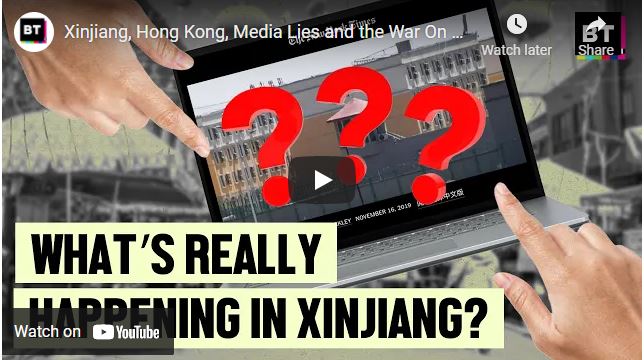 Rania Khalek was joined by Daniel Dumbrill, a political commentator on China-related issues who is based in Shenzhen, to speak about his experiences in Hong Kong, his recent trip to Xinjiang and how it relates to America’s new Cold War.

0:00 Intro
0:57 Who is Daniel Dumbrill?
4:15 What really happened in Hong Kong vs the western media narrative
17:32 How does China view the US leaving Afghanistan?
20:54 Has Daniel ever had trouble with security authorities in China?
23:52 How did Daniel get to Xinjiang? Was it hard to get in?
26:38 What Daniel saw in Xinjiang and how it compares to accusations in the US press
31:41The US “War on Terror” vs legitimate threats countries deal with in their own borders and how it’s different
34:30 Daniel speaks Mandarin!
38:51 What is the terrorism problem in Xinjiang? Who is behind it?
47:47 Is there diversity in China or is there an attempt to impose one culture on people, as Western media claims?
49:51 The intended impact of US sanctions on Xinjiang
54:56 Who is behind all these wild accusations against China?
1:00:09 The importance of Xinjiang to the Belt and Road Initiative
1:06:15 Daniel responds to his critics
1:16:10 The eradication of extreme poverty in China
1:25:37 Where you can follow Daniel’s work