HOME / WORLD / US Unveils Legal Trigger for War With Russia 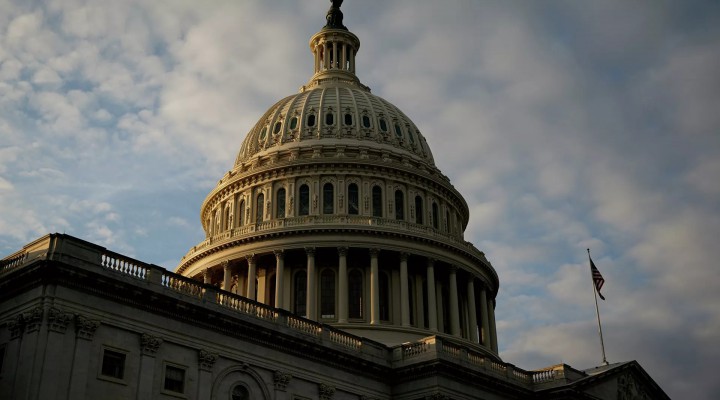 American Senators have unveiled what amounts to be a legal trigger for war with Russia. Disturbingly, there seems little or no leeway to avert conflict because of the Russophobia warping any rational judgment in Washington.

A bill tabled this week in the Senate looks likely to pass into law because of the bilateral consensus of belligerence towards Russia. It is generally accepted as if fact that Russia is threatening to invade Ukraine despite Moscow’s repeated denials and lack of evidence to support such sensationalized speculation.

Among other provocations, the lawmakers want to more than double the supply of lethal weaponry that the US is about to send Ukraine and to kill off the Nord Stream 2 gas pipeline from Russia to Europe.

On top of that – as if all that were not incendiary enough – the US Senators want to designate Russia a “terrorist state” if its “forces further invade Ukraine”. Such a designation of a nuclear superpower is unprecedented. It is an insane move that would make diplomacy and negotiation all but impossible. It’s tantamount to declaring war.

The legislation is authored by hawkish Republicans including Marco Rubio, Tom Cotton and Jim Inhofe. They are well connected to the Pentagon and US intelligence services.

If passed, the GUARD law (Guaranteeing Ukraine’s Autonomy by Reinforcing its Defense) will increase lethal military aid to the US-backed Kiev regime by $450 million for the forthcoming year. That is on top of the $300m already allocated for the Ukrainian armed forces in the new US military budget for 2022.

The rhetoric used in the text of the bill is unhinged. Russia’s President Vladimir Putin is accused of “thuggery” and “aggression” towards Ukraine. The senators condemn Putin’s “efforts to rob the Ukrainian people of their sovereignty,” and they claim that the lethal aid “makes sure the brave Ukrainian armed forces have the resources they need to fight for their country’s freedom and future.”

It is the simplistic, dangerous mindset of American lawmakers who think they are playing “Cowboys and Indians”.

Of course, there is no mention of more complex realities, such as the fact that it was the US and its NATO allies who created the far-right Kiev regime with its toxic Russophobia out of a violent coup d’état in 2014 against an elected government. No mention, of course, that the Ukrainian armed forces comprise Neo-Nazi battalions who have been waging a war on the ethnic Russian population of Southeast Ukraine for nearly eight years in violation of the Minsk peace accord.

American politicians are too dimwitted and propagandized to even have an iota of understanding of what the Ukraine conflict is all about. Yet they appoint themselves as global sheriffs.

Washington’s funnelling of $2.5 billion in military supplies to the Kiev regime since 2014 is a major factor in why this regime is embarking on a strategy of increased tensions in Ukraine. It has de facto repudiated the Minsk accords of 2015 and is aiming to settle the civil war by conquest and force. NATO military trainers from the United States, Britain and Canada, among others, are on the ground in Ukraine. NATO’s warships and warplanes have increased unscheduled war manoeuvres in the Black Sea region near Russia’s borders, including the deployment of nuclear-capable bombers. Provocatively, NATO leaders seem deaf to Russia’s national security concerns.

American lawmakers want to pile even more lethal weaponry into Ukraine. That is green-lighting the Kiev regime to escalate its already reckless aggression towards Russia. If it weren’t so heinous, it would be laughable. The warmongering senators say their legal measure is aimed at “deterring conflict”.

Disconcertingly, the hawkish shills in the Senate for the military-industrial complex accuse President Biden of appeasing Putin and “willingness to make concessions”. They claim “Putin has become more aggressive since Joe Biden took office.”

Since Biden became president just 11 months ago, US relations with Russia (and China) have sharply deteriorated. Tensions have ratcheted up as a result of the Biden administration’s aggressive policies towards Russia over Ukraine (and towards China over Taiwan). To portray Biden as some kind of a dovish pushover, as the senators are doing, is preposterous. This Democrat president – like most of his predecessors – is a willing tool of US imperialism just as much as these Republican lawmakers are. Together, they are the War Party.

The fiendish thing is that there seems to be no way out of the warmongering spiral that Washington is in. It accuses Russia of the very aggression that it is wielding, it is blinded by its own propaganda and Russophobia, and there are no voices of sanity to check the crazed group-think. Biden and his aides like the supposedly urbane Secretary of State Antony Blinken are just as barbarian as Republican knuckle-draggers.

The United States is fashioning a legal trigger for war with Russia over Ukraine and its idiotic politicians are baiting one another into pulling it.

3 thoughts on “US Unveils Legal Trigger for War With Russia”