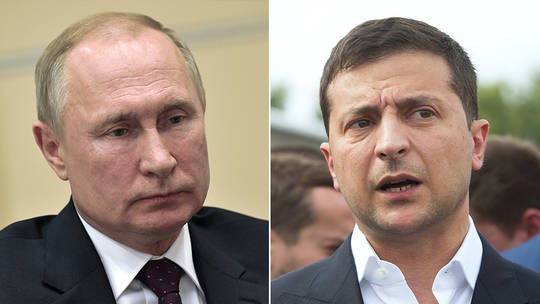 The much-anticipated meeting between Ukraine’s Volodymyr Zelensky and Russia’s Vladimir Putin is in danger of being a lost opportunity for peace. Washington’s political infighting has stacked the odds against a successful summit.

Weeks of impeachment hearings in the House of Representatives, accusing President Trump of abusing his office with regard to Ukraine, have achieved very little except for two things. Ukraine’s international image has been trashed with corruption claims and depiction of the country as having vassal-like dependency on the US, and secondly, demonization of Russia which has been heightened as an “aggressor” supposedly out to destroy Ukraine.

The irony is that Washington purports to be an ally of Ukraine to promote democracy, sovereignty, and independence of the former Soviet republic. But the upshot of the impeachment inquiry is that Ukraine’s independence and sovereignty is gravely undermined.

When President Zelensky holds multilateral talks soon with Putin, the Ukrainian leader will have little room to maneuver as a result of the cacophony back in the US.

The two leaders are due to meet on December 9 in Paris as part of a four-way summit also involving German Chancellor Angela Merkel and French President Emmanuel Macron. The meeting is a return to long-suspended peace talks and an attempt to revive the 2015 Minsk accords for ending conflict in eastern Ukraine.

It is over three years since the so-called Normandy Format last convened. The Minsk peace deal was never implemented, mainly because former Ukrainian president, Petro Poroshenko, refused to fulfill commitments to give regional autonomy to pro-Russian separatists in eastern Ukraine. Consequently the war has dragged on for nearly five years.

Zelensky was elected by a landslide vote in April primarily on the ticket that he would seek a peace settlement. In September, he agreed in principle to grant special status for the Donbas breakaway region of eastern Ukraine. Subsequently, though, Zelensky has appeared to backpedal on how much autonomy he is willing to countenance. Troops under his command have begun withdrawing from the front line with separatists, but it is not clear if that move marks a reliable de-escalation.

Alexander Lukashevich, Russia’s permanent representative to the Organization for Security and Cooperation in Europe, stated on November 21 that forces under Kiev’s command are still violating terms of a truce by not removing combat hardware from the line of contact. “This, to put it mildly, non-constructive approach to preparations for the Normandy meeting causes justified concern,” he added.

In a move seen as a trust-building gesture, Russia recently returned three Ukrainian naval vessels which it had confiscated last year after an infringement of its territory in the Kerch Strait.

The forthcoming meeting in Paris thus holds a fledgling start to finding a peaceful resolution to a conflict which has resulted in over 13,000 dead and millions displaced from their homes.

However, the impeachment debacle in Washington has painted Zelensky as a pathetic politician “who loves Trump’s a**” and “who will do anything” to curry favor with the president. The Democrats and obliging former US diplomats who had worked in Ukraine are claiming that Trump pressured Zelensky to dig dirt on Joe Biden, his would-be Democrat rival in next year’s election.

So zealous are Trump’s political opponents in Washington, together with the liberal media and US intelligence agencies, to pin an impeachable offense on him, that the Ukrainian president has ended up a lame-duck leader in the collateral damage.

This has generated much mockery among Ukrainians of the former comedian-turned-president, who has been nicknamed “Monica” in reference to the impeachment of President Bill Clinton for his sexual affair with White House intern Monica Lewinksy.

Even before the hearings in Congress got under way, Zelensky had been under fire from Ukrainian nationalists who accuse him of “capitulating” to Russia over his willingness to negotiate a peace settlement in eastern Ukraine. Kiev has seen large rallies of up to 20,000 protesting Zelensky’s peace efforts as a betrayal.

In a recent media interview, American professor Stephen Cohen, an astute observer on Russia-Ukraine, says that Zelensky is in a very precarious situation. Despite being overwhelmingly elected to find a peaceful solution to Ukraine’s conflict, the new president, says Cohen, has to contend with far-right paramilitary leaders who view any peace deal negotiated with Russia as treasonous. Zelensky has been subjected to death threats.

As Cohen points out, if the US was genuinely concerned about establishing peace and democracy in Ukraine, then Washington should be fully supporting Zelensky’s overtures to Moscow, to let him and the Ukrainian people know “we got your back.”

But as it is, Zelensky is going into negotiations with Putin as an isolated figure who has been demeaned by Washington’s squabbling and caricatured as a stooge.

Thus, what is being set up for the Ukrainian leader is an almost impossible task. If he were to agree with Putin to a further withdrawal of military forces from the contact line with pro-Russian separatists, or if he commits to implementing Minsk provisions for regional autonomy, then the uproar in Washington is predictable. Zelensky will be cast as selling out to Putin and capitulating to “Russian aggression.”

Such is the delirium of Russophobia in Washington, where Democrats and so-called ‘Russia experts’ like Fiona Hill have labeled Trump a “Kremlin agent” and “Bolshevik,” the next sequence in their narrative is that Trump abused his office in order to get Zelensky to surrender to Putin. Now we’re really talking impeachment, so it goes.

Missing from the political fight in Washington are the following key issues: it was American and Europe interference in Ukraine, not Russian, that plunged the country into ongoing conflict. That interference peaked with the CIA-backed coup in Kiev in February 2014, which led to Crimea seceding in a referendum and joining the Russian Federation. The coup also led directly to the war in eastern Ukraine by a neo-Nazi regime in Kiev against the ethnic Russian population who understandably have demanded autonomy.

The $400 million in military aid that Trump is accused of using as leverage on Zelensky, obscures the bigger picture of why the US has sent a total of $1 billion in military aid to the country in order to antagonize Russia. This has long been the agenda of Washington’s foreign policy establishment, to destabilize Russia by pushing Ukraine to join the NATO alliance.

The impeachment hearings against Trump have obscured and turned reality on its head. The anti-Trump Democrats, media and ‘deep state’ operatives want to exclude any wider investigation into corrupt dealings by the former Obama administration in Ukraine by asserting that any such claims are merely “Russian disinformation.”

Moreover, not only is the truth about Washington’s corruption in Ukraine being concealed, but the vassal status of Ukraine is complete by it not having any freedom to negotiate its way out of conflict or restoring normal neighborly relations with Russia.

Return to Russia: Crimeans Tell the Real Story of the 2014 Referendum and Their Lives Since

One thought on “US impeachment furor sabotages Ukraine-Russia peace talks”