HOME / WORLD / Establishment Dems Demand Trump be Impeached, but Not for War Crimes 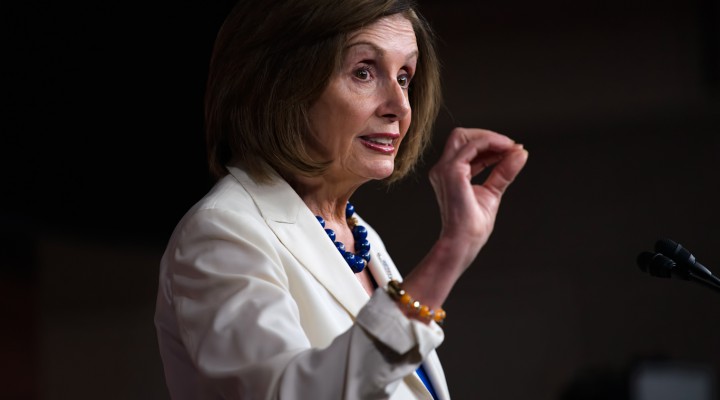 UkraineGate has so far failed to capture the public imagination precisely because it does not go after Trump for his most egregious and impeachable domestic and foreign policies.

MPN– The Presidential impeachment proceedings rumble on as House Democrats continue their attempt to remove Donald Trump from office. Their case centers around the revelation that the President used his office to lean on a foreign head of state to dig up dirt on a domestic adversary. Trump is widely accused of threatening to withhold financial aid to Ukraine if the country did not open an investigation into Barack Obama’s Vice President Joe Biden, currently a major contender for the Democratic Presidential nomination, thus effectively using his power to persecute political opponents.

House Intelligence Chairman Rep. Adam Schiff (D- CA) is leading the case against Trump. In an interview with CNN’s Jake Tapper he condemned the President as a threat to the nation:

What matters to Donald Trump is what matters to him personally and politically. The rest, our national security, our allies, none of that matters, compared to what this President thinks is good for him.”

Schiff called on the Republican Party to stand on the right side of history, and help take down their own leader.

What is open to question is whether members of Congress are going to do their duty, and whether there will be anyone like Howard Baker, anyone on the Republican side that is willing to put their country, their Constitution above the party, or even the person of this President, because I don’t think he really represents at least what the Republican Party used to stand for”, he said.

Senior members of the establishment appear outraged by Trump’s transgressions against fellow Washington insiders. “This is the most impeachable conduct we have ever seen from a president of the United States!” thundered neoconservative personality, Max Boot.

"This is the most impeachable conduct we have ever seen from a president of the United States." –@MaxBoot.

Keeping to this century, how about launching an illegal war of aggression that destroyed Iraq & countless lives — conduct that @MaxBoot supported? pic.twitter.com/gL4aIpmsUM

This assertion implies that Trump’s actions were more scandalous than, for example, the Bush administration’s weapons of mass destruction deception that paved the way for multiple Middle Eastern wars and the destruction of an entire region, successive presidents prosecuting the Vietnam War, or the FBI’s domestic war waged against the entire political left, known as COINTELPRO.

It is telling that what sparked the Democrats’ impeachment proceedings was not the President’s role in supporting the Saudi-led genocidal war in Yemen, dropping the Mother of All Bombs (the largest non-nuclear bomb ever used) on Afghanistan, supporting a coup in Bolivia and attempting several in Venezuela. Indeed, all of Trump’s most aggressive, destructive actions as President of the United States appear beyond reproach as establishment liberals have consistently stood shoulder-to-shoulder with Trump on foreign policy, applauding bombings and efforts at regime change.

Trump used the power of the security state to crackdown on Latinx immigrants and harass, intimidate and ban Muslims. But it was only when he attempted to go after a powerful senior Washington Senator that the Democratic Party rushed to respond. As late as March 2019 Speaker of the House Nancy Pelosi insisted impeachment was “off the table.” Yet the House Democrats are now pushing forward with their attempts to unseat the president.

Both analysts and the public agree that they will not find it easy. Democrats will have to convince Republican congressmen and women to join them and then get a two-thirds majority in the Republican-controlled Senate to remove their own leader, a leader who is wildly popular with his base. A recent Monmouth poll found that Trump enjoys an 84% approval rating among Republican voters and that half of all Republican respondents said they would be less likely to back House members who helped impeach the President. And no doubt the conservative Supreme Court, including recent Trump appointees Neil Gorsuch and Brett Kavanaugh, would offer resistance. That is why only 1 in 5 Americans see impeachment as a likely possibility. As MSNBC anchor Nicolle Wallace lamented “’It’s gonna take a dead Russian hooker at the bottom of the Hudson before Republicans wake up.”

In their drive to impeach, Democrats have had to gloss over inconvenient facts of the case. Biden’s son Hunter, who had no relevant experience or qualifications, and whose most notable moment was being discharged from the Navy due to a cocaine habit, was given a $1,000,000+ per year position on the board of a Ukrainian gas company around the same time as his Vice President father’s government was interfering in the country’s internal politics, supporting the government in a civil war. But MSNBC host Joy Ann Reid, defended this, insisting, “What Hunter Biden did wasn’t illegal.”

It appears that, like RussiaGate, another #resistance anti-Trump campaign, impeachment could blow up in liberals’ faces. Referencing Adam Schiff, the president recently tweeted, “The Impeachment Scam is driving Republican Poll Numbers UP, UP, UP! Thank you Shifty.”

The Impeachment Scam is driving Republican Poll Numbers UP, UP, UP! Thank you Shifty.

The latest survey from Emerson College found that independents are turning against impeachment and that Trump’s approval ratings, possibly as a result of the UkraineGate scandal, have actually jumped by 5 points, from 43% to 48%. Trump is now leading Biden and Bernie Sanders by 3 points and Elizabeth Warren by 5 in 2020 election projections.

UkraineGate has so far failed to capture the public imagination precisely because it does not go after Trump for his most egregious and impeachable domestic and foreign policies. This is because while establishment Democrats offer stiff resistance to Trump in his attempts to undermine Biden, they largely agree with his economic sanctions, wars and regime change efforts, proving again that, when it comes to foreign policy, there is only one party in the U.S.

0 thoughts on “Establishment Dems Demand Trump be Impeached, but Not for War Crimes”