HOME / WORLD / Is Europe Eyeing a ‘Reset’ With Russia? 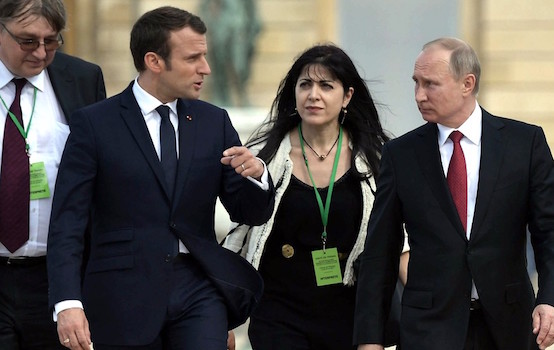 The situation in Ukraine has held relations between the United States, Europe, and Russia hostage since the Russian annexation of Crimea in 2014. But the unipolar world that existed then no longer holds. And how Europe chooses to manage the decline in U.S. relevance will go a long way in determining whether the European future is one of peace and prosperity or conflict and ruin.

As it it turns out, while American politicians continue to view Russia as a global threat vis-a-vis domestic politics, Europe seems to have gotten the memo, with at least some leaders moving in a healthier direction.

“We are no doubt living in the end of Western domination of the world,” French President Emmanuel Macron told a gathering of French diplomats shortly after the close of the G-7 summit. “We have been accustomed to a world order since the 18th century based on this hegemony,” he added, “but things have changed and fluctuated due to the mistakes of Westerners in some crises.”

What appeared to prompt the French president’s harsh assessment was a realistic re-thinking of the current state of play regarding U.S.-European relations with Russia and the consequences attached to such. While much of the U.S. media hounded President Trump when he opined on August 20—the eve of the Biarritz G-7 summit—that “it’s much more appropriate to have Russia in and it should be the G-8,” less attention was paid when Macron essentially said the same thing. On August 21, he stated that it was “important for Russia to rejoin” the G-7 after being excluded from it in 2014.

(Macron’s statement did come with a caveat—that the “necessary prerequisite” for Russia’s returning to a G-8 structure was for a solution to be found on the issue of Ukraine based upon the Minsk agreements of 1993. Many observers felt this is unrealistic and that may have served to mute the impact of his bold statement.)

Most observers view Trump’s and Macron’s statements as independent events, with little or no relation to one another. And while the two leaders did discuss the issue of Russia’s rejoining the G-8 in time for next year’s summit, there was no formal consideration by the G-7 of readmitting Russia, and it looked like, by summit’s end, that the issue was moot. However, as Macron’s comments to the French diplomats made clear, he left Biarritz with Russia very much on his mind.

According to Macron, the end of Western hegemony, predicated largely on the premise of U.S. military and economic domination, will bring with it the end of “the European project of civilization”—the European Union—unless Europe is able to adjust to this new reality and alter the trajectory of its relations accordingly.

“Pushing Russia away from Europe,” Macron said, “is a great mistake,” adding that Europe must rethink the relationship. “Since the fall of the Berlin Wall,” he continued, “we have established a relationship with Russia based on mistrust.” Russia, Macron declared, “is in Europe,” and he went on to warn that pushing Moscow away will only push it into the arms of China.

Europe, Macron said, should strategically explore ways of “convergence” with Russia that don’t abandon Ukraine. If it cannot do this, “we will maintain a futile tension, and frozen conflicts will remain throughout Europe, and Europe will remain the scene of a strategic battle between the United States and Russia, so we will continue to receive the consequences of the Cold War on our soil.”

The fact that Macron made such a bold statement so soon after the Biarritz summit, and so shortly after consulting with President Trump, suggests a coordinated position and not simply a standalone one-off. Seen in this light, his words are worthy of greater consideration.

Macron is fighting an uphill struggle on two fronts. First, he must find concurrence within a U.S. policy elite addicted to the notion of American-led global domination. Second, he must thread the needle between European elites who are convinced that allowing Russia’s actions in Ukraine to stand undermines European viability, and the reality that maintaining the status quo with Moscow will only bring down the vision of European unity these elites purport to defend.

The “futile tension” and “frozen conflicts” Macron warned about are very much a reality in Europe today. This reality was perhaps best manifested by the impolitic words of the commander of U.S. Air Forces in Europe, General Jeff Harrigan, about the threat posed to Europe by Moscow’s military buildup in the Russian Baltic enclave of Kaliningrad. “If we have to go in there to take down, for instance, the Kaliningrad IADS [Integrated Air Defense System], let there be no doubt we have a plan to go after that,” General Harrigan told members of the press. “We train to do that. We think through those plans all the time, and…if that would ever come to fruition, we’d be ready to execute.”

The Russian response was predictable. The country’s prime minister, Dmitri Medvedev, called Harrigan’s comments “idiotic,” while a spokesperson for the Russian Foreign Ministry said they were viewed by Russia as “a threat” and were “absolutely irresponsible.” The Russian Ministry of Defense simply observed that “the region of Kaliningrad is reliably protected from any aggressive ‘plans’ developed in Europe by U.S. Generals passing through.”

Russian objections aside, the reality is that General Harrigan’s statements were based more on bluster and posturing than reality. Simply put, the U.S. Air Force hasn’t taken down an integrated air defense system in 20 years (the last being the antiquated Serbian air defense in 1999) and is totally unprepared to fight against the kind of peer-level threat it would face in Russia. Unlike its one-way battles with Iraq, the Taliban, al-Qaeda, and ISIS, where air supremacy was guaranteed, not only would the airspace over and around Kaliningrad be heavily contested, the Russians would not be passive targets. Russia has the ability to strike back at America and its European allies with a full spectrum of capabilities that would degrade command and control, neutralize air bases, and change the reality on the ground as thousands of Russian tanks and armored vehicles advanced with no viable U.S. or NATO ground combat response.

General Harrigan would do well to familiarize himself with the order of battle of both the 1st Guards Tank and 20th Combined Arms armies before making similar statements in the future.

The issue of Kaliningrad is itself a direct extension of the conflict in Ukraine. Poland and the Baltic States have used the Russian annexation of Crimea and related intervention in Donbas to create the perception of an overarching Russian military threat to Eastern Europe in particular, and NATO as a whole, that is unmatched by reality. Simple cause-and-effect analysis shows that Russia’s military build-up in its districts that border NATO has been reactive in nature and primarily defensive in character.

The fact that Russian military doctrine emphasizes a rapid transition from defense to deep counter-offensive actions is not the fault of Russia, but rather those who would provoke such actions. There are consequences for withdrawing from the anti-ballistic missile (ABM) treaty, deploying new anti-missile defense systems aligned against Russia, and allowing NATO to expand to the former Soviet Baltic Republics.

Ukraine is a ticking time bomb. So long as the U.S. and Europe embrace the unrealistic demand of Russia’s withdrawal from Crimea and corresponding surrender on the economic and political realignment of Ukraine with the West, Moscow will be compelled to maintain the status quo—which means sustainment of the militarized atmospherics that generate the sort of crises in Kaliningrad and elsewhere that are themselves artificial but could become all too real.

The status quo, moreover, plays exclusively into Russia’s hand. By the end of the year, the Nordstream-2 gas pipeline will come online, linking Russian natural gas supplies with the German and, by extension, European economies. In addition to making Europe more dependent upon Russian gas supplies, the Nordstream-2 makes older pipelines running through Ukraine redundant. Russia will most likely stop transporting gas through these pipelines, starving Ukraine of the billions of dollars in transit fees that sustain its economy. No amount of “lethal aid” provided by the U.S. can compensate for the loss of such a critical income stream. That will leave Ukraine sinking into further economic ruin, generating even more political chaos.

This is the reality that Europe has tied its future to. It is unsustainable—something Macron, at least, recognizes. Left to its own devices, the situation in Ukraine invites the very conflicts on European soil that would spell the doom of the post-World War II European experiment. Western hegemony may be over, but Europe’s place as a critical pillar of a future multipolar world does not need to perish with it. How Europe will navigate its way out of the Ukrainian morass is, as yet, unknown. But the fact that it must embark on such a journey, and soon, is undisputed.

Will Moscow Fall for The Macron Deception?

Communication – the only issue of the G-7 summit in Biarritz

0 thoughts on “Is Europe Eyeing a ‘Reset’ With Russia?”