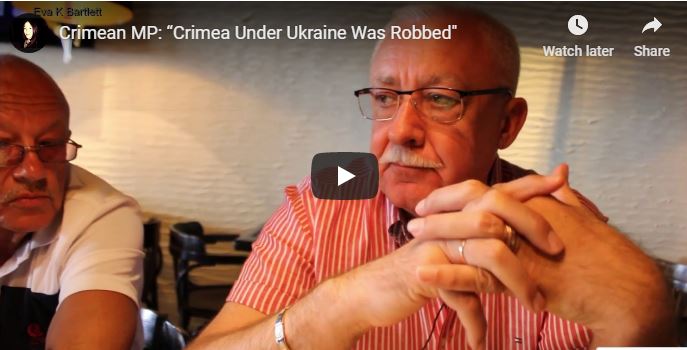 In Simferopol, Crimea, in August, I met with Yuri Gempel, a Member of Parliament, and the Chairman of the Standard Commission on Inter-Ethnic Relations of the Parliament of Crimea.

Excerpt from our conversation:

“Crimea, under Ukraine, was robbed,” Gempel says. “Everything was taken by the government and representatives of the ruling elite of Ukraine. For the 23 years Crimea was a part of Ukraine, they robbed Crimea. Not a single kindergarten was built in Crimea during those years. Kindergartens built during Soviet times stopped functioning.

But the main issue is that during that time, the people still felt themselves to be in Russian territory, not Ukrainian, in language, culture and in spirit. Under Ukrainian rule, Crimeans were made to speak Ukrainian, although Crimeans’ native language is Russian. People were deprived of the right to be in state service if they did not speak Ukrainian.”

One thought on “Crimean MP: “Crimea Under Ukraine Was Robbed””