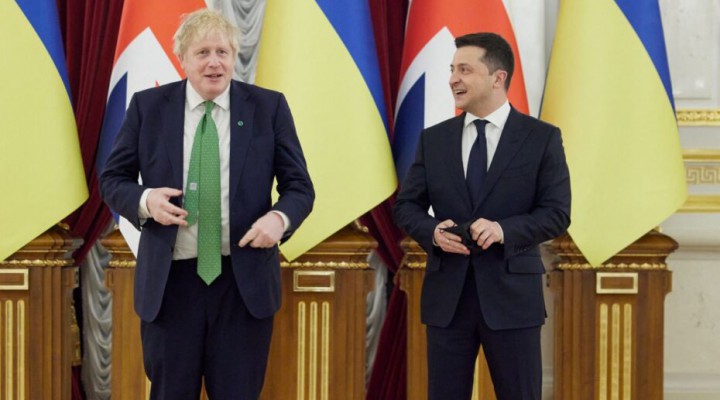 British duplicity doesn’t come much thicker than Prime Minister Boris Johnson’s hailing the virtues of diplomacy while piling up military tensions with Russia.

Johnson wrote an opinion piece for the Times newspaper this week in which he said he believed that “diplomacy can prevail” to prevent mounting tensions over Ukraine from escalating into a full-blown war between the US-NATO military bloc and Russia.

This was while Johnson announced that Britain was planning to deploy more Marines, fighter jets and warships to Eastern Europe. Britain has already taken the lead among European NATO members in sending weapons and special forces to Ukraine in what is claimed to be a defense against “Russian aggression”.

What Johnson is proposing this week is deploying more British forces to Poland and the Baltic states in what he calls a show of Britain’s “immovable” support for Europe. This is cynical grandstanding to burnish Britain’s image as some kind of noble power.

France’s President Emmanuel Macron was in Moscow this week for substantial talks with Russian leader Vladimir Putin on efforts to deescalate tensions over Ukraine. Next week, German Chancellor Olaf Scholz is also to visit Moscow for talks with Putin.

Then we see London seeming to do its utmost to make sure diplomacy fails by wantonly raising military tensions with Russia.

Johnson and his Foreign Secretary Liz Truss have been busy issuing dire warnings to Russia that it faces bloody carnage if it dares invade Ukraine. Moscow has repeatedly denied it is planning to invade. Nevertheless, Truss has been photographed in British news media donning military body armor while riding atop a tank. She is due to visit Moscow in the coming days for talks with her Russian counterpart Sergei Lavrov. It promises to be a frosty meeting. One wonders why the Kremlin is even entertaining such an incompetent and disingenuous British envoy.

London, as usual, is doing Washington’s bidding. Since the United States launched the propaganda campaign nearly three months ago accusing Russia of aggression against Ukraine, Britain has been vocal in amplifying Washington’s message of alleged Russian aggression.

Propaganda and media psychological operations are one realm where the decrepit British empire retains some dubious skills. Presumably, the prevalence of anglophone mass media gives the Brits an innate advantage.

What London seems good at capitalizing on is animating the ready and willing inherent Russophobia of Poland and the Baltic states. The recent British military deployments have been concentrated in these Eastern European states, as well as in Ukraine. This move has served to pump up the hysteria of Russian aggression.

It is significant that last week Johnson was in Kiev meeting Ukrainian President Vladimir Zelensky on the same day as Polish premier Mateusz Morawiecki. Morawiecki has been among the most vehemently Russophobic Eastern European voices demanding more drastic sanctions against Moscow.

Johnson is reinforcing these calls for a unified NATO and European position on preemptive sanctions against Russia “if it invades Ukraine”. Johnson said the sanctions should be “ready to go” and should include the termination of the Nord Stream 2 gas supply pipeline between Russia and the European Union.

Notably, Germany and France – the two largest economies of the European Union – are reluctant to talk about terminating Nord Stream 2 in the event of escalating tensions. Berlin and Paris are discernibly more disposed to find a diplomatic way out of the impasse between the US-led NATO bloc and Russia.

Here’s a bitter irony: Britain quit the European Union after its Brexit referendum in 2016. Boris Johnson was a leading public figure pushing for Brexit with the mantra of “taking back control” from the European Union.

Yet while Britain is now formally out of the European bloc, it is still able to exert tremendous sway over the EU in its relations with Russia. London is mobilizing an axis of hostility towards Moscow by militarizing the Russophobic Eastern European states, as well as Ukraine, and by pushing sanctions to destroy strategic energy trade with Russia.

The crisis over Ukraine has been artificially pumped up by Washington aided and abetted by London. Dictating Europe’s energy and foreign affairs with regard to Russia, and also China, is the tacit objective for Washington and its trusty British minion. And in pulling that objective off, Britain has cynically exploited Eastern European Russophobia to land itself an outsized role in interfering with the European Union’s affairs, a bloc which it officially left after Brexit.

But there is little chance of diplomacy prevailing when the likes of Boris Johnson and other Cold Warriors in London are fueling war tensions with provocative supplies of weapons to Eastern Europe amid fantastic distortions about “Russian aggression”.

A further bitter irony is Britain’s nefarious historical role in inciting wars in Europe. Contrary to the conventional propaganda version of the Second World War, it was London that covertly mobilized Nazi Germany to attack the Soviet Union, thereby sacrificing its nominal “ally” Poland and others in the process. Today, London proclaims it is defending Europe against “Russian aggression” while paving the path to war against Russia.