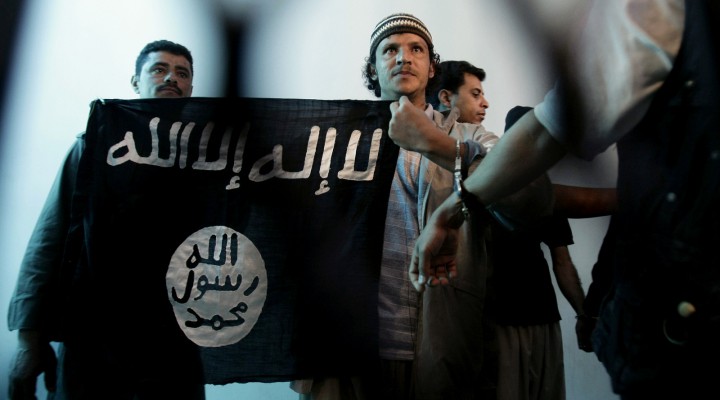 MPN- The de facto alliance between the U.S. with Saudi Arabia, the UAE, AQAP, and now allegedly ISIS in Yemen has led to one of the worst humanitarian disasters in modern history,

Ali Abdullah al-Bujairi — a Yemeni politician who served as a senior member on the failed UN-brokered transitional government and as Yemen’s ambassador to Iraq under former president Ali Abdullah Saleh — is accusing the United Arab Emirates of facilitating a transfer of ISIS officials into Yemen.

Since the toppling of ISIS’ so-called caliphate — with Raqqa, Syria as its capital — the terrorist organization has gained a foothold in a number of other countries. In Afghanistan, Russia and Iran have accused the U.S. of helping to facilitate the group’s spread.

Despite its loss of territory in Iraq and Syria, “ISIL is still active in ten countries in 2017,” according to the 2018 Global Terrorism Index report from the Institute for Economics & Peace, which further states:

The collapse of ISIL in Iraq and Syria has moved the group’s activities elsewhere, in particular to the Maghreb and Sahel regions, most notably in Libya, Niger, and Mali, and Southeast Asia, most notably the Philippines.”

In 2017, the terror group’s reach was felt in many corners of the world. The report states: “ISIL committed attacks in 286 cities around the world in four different regions:  Asia-Pacific, Europe, MENA [Middle East and North Africa], and the Russia and Eurasia region.” However, those hit hardest by the group’s terror have mostly been in the Middle East and North Africa. The report concludes:

Of all ISIL attacks, 98 percent of incidents and 98 percent of deaths occurred within the MENA region. Ninety percent of all terror attacks and 81 percent of terror-related deaths from ISIL occurred in Iraq alone.”

These figures, however, do not include the Islamic State’s chapter in Afghanistan, referred to as the Khorasan Group (ISIS-K), nor does it include ISIS affiliates in Egypt.

The campaign by the U.S. with Saudi Arabia, the UAE, AQAP, and now allegedly ISIS in Yemen has led to one of the worst humanitarian disasters in modern history, with large portions of the population at risk for starvation, millions displaced, and scores of civilians and children killed, MintPress News has reported.

While the Saudi-led coalition’s dealings with the Yemen affiliate of ISIS remain largely unexplored, the main partners have their own ties to al-Qaeda in the country. This unholy alliance meant to depose the Houthis, has seen the coalition, of which the supposedly democratic government of the U.S. became a member without prior authorization from Congress, work hand-in-glove with al-Qaeda.

Little is known about the presence of ISIS in Yemen, with the numbers of fighters believed to be in the low- to mid-hundreds, according to the UN Security Council. The U.S. conducted a grand total of 36 airstrikes against terrorist groups in the country in 2018, but the overwhelming majority targeted the much larger Al-Qaeda affiliate, Al-Qaeda in the Arabian Peninsula (AQAP), and the U.S. has not struck ISIS in Yemen since January 2018.

While ISIS has attacked Houthi and Shia Muslim targets in Yemen, it has no territory. AQAP, on the other hand, controls large swaths of the southeast. According to the Global Terrorism Index, “Adan-Abyan Province of the Islamic State is primarily active in the southern coastal province of Adan, while AQAP in active in the provinces of Abyan and Lahij, and Ansar Allahin Taizz and Marib.” Other ISIS affiliates once existed in Yemen but have since dwindled out.

While the extent and nature of U.S. relations with ISIS in Yemen is unclear, its relationship with its regional rival AQAP, which is best described as that of “frenemies,” is more widely known.

In December, the U.S. Congress voted to end support for Saudi Arabia’s war on Yemen, but the U.S. remains authorized to fight on Yemeni soil because of the 2001 Authorization for Use of Military Force (AUMF). This document also provided the U.S. cover for its war in Syria. The bill allows for the use of force against groups associated with attacks on 9/11, and ISIS was tenuously linked to al-Qaeda.

However, the U.S. was a member of the Saudi-led coalition for years. This partnership became unpalatable to mainstream media pundits and audiences over the summer when a U.S.-made bomb was used by Saudi Arabia on a bus in an airstrike that left 40 children dead.

While AQAP is the ostensible enemy of the United States, they appear to be a friend of a friend in the very least. In February, it was revealed that Saudi Arabia and the UAE gave U.S.-made weapons to al-Qaeda fighters in the country. CNN reports:

Saudi Arabia and the United Arab Emirates, its main partner in the war, have used the U.S.-manufactured weapons as a form of currency to buy the loyalties of militias or tribes, bolster chosen armed actors, and influence the complex political landscape.

One of those militias linked to AQAP, the Abu Abbas brigade, now possesses U.S.-made Oshkosh armored vehicles, paraded in a 2015 show of force through the city.

Abu Abbas, the founder, was declared a terrorist by the U.S. in 2017, but the group still enjoys support from the Saudi coalition and was absorbed into the coalition-supported 35th Brigade of the Yemeni army.

In October 2015, military forces loyal to the government boasted on Saudi- and UAE-backed media that the Saudis had airdropped American-made TOW anti-tank missiles on the same frontline where AQAP had been known to operate at the time.”

Speculation that the Saudi-led coalition was working with terrorists was finally legitimized in the mainstream media over the summer, when the Associated Press revealed that “the coalition cut secret deals with al-Qaeda fighters, paying some to leave key cities and towns and letting others retreat with weapons, equipment and wads of looted cash, [while] hundreds more were recruited to join the coalition itself.”

Shockingly, the AP revealed that

Key participants in the pacts said the U.S. was aware of the arrangements and held off on any drone strikes…

In one case, a tribal mediator who brokered a deal between the Emiratis and al-Qaeda even gave the extremists a farewell dinner.”

The U.S. had been fighting on two fronts in Yemen: one against Al-Qaeda, in closer partnership with the UAE; and another alongside the Saudi-led coalition, which includes the UAE, against the Houthi government. The latter was, of course, the priority. In contrast to the 36 bombing missions the U.S. conducted against AQAP and the ISIS affiliate in Yemen in 2018, the U.S. refueled coalition fighter jets more than 9,000 times between March 2015 and July 2017.

This dynamic has fostered an alliance of convenience between the U.S. and AQAP, materialized by the flow of U.S.-made weapons from the U.S. to gulf monarchies, which, in violation of U.S. rules, use them as bargaining chips with jihadists.

In fact, the U.S. was “aware of an al-Qaeda presence among the anti-Houthi ranks,” AP said, citing a “senior American official.” Even the Saudi-backed former president of Yemen, Abdrabbuh Mansur Hadi, “tapped” Adnan Rouzek to be a “top military commander.” Rouzek was a senior al-Qaeda official who escaped from prison in 2008 with other members and continues to be photographed with known al-Qaeda operatives. His militia under Hadi “became notorious for kidnappings and street killings, with one online video showing its masked members shooting a kneeling, blindfolded man.”

In November 2017, Hadi picked Rouzek to coordinate the military campaign and serve as a top commander of a new fighting force, and gave him $12 million for a new offensive.

Another “coalition-backed warlord is on the U.S. list of designated terrorists due to his ties to al-Qaeda.” That warlord is Sheikh Aboul Abbas.

One security official told AP that “Aboul Abbas’ forces attacked security headquarters in 2017 and freed a number of al-Qaeda suspects.” He said he reported the attack to the coalition, but the perpetrators were rewarded with “40 more pickup trucks.” “The more we warn, the more they are rewarded,” he told AP. “Al-Qaeda leaders have armored vehicles given to them by the coalition while security commanders don’t have such vehicles.”

“Elements of the U.S. military are clearly aware that much of what the U.S. is doing in Yemen is aiding AQAP and there is much angst about that,” terrorism expert Michael Horton told AP at the time. Horton called parts of the U.S.-UAE campaign against AQAP a “farce.”

While Saudi Arabia has been roundly denounced for its attacks on civilians and infrastructure in Yemen, particularly since the unrelated slaying of journalist Jamal Khashoggi, less attention has been paid to allegations of UAE war crimes in the country. NGOs and reporters have accused the country of running a network of secret prisons in the south that use torture as a feature of detention.

Degrading an enemy whose presence is “exaggerated”

While the UAE is now being accused of helping to spread ISIS into new theaters of conflict, the U.S. was accused of doing the same in Afghanistan last year.

The Afghanistan-based affiliate “was responsible for 14 percent of terrorism deaths, or 658 people, in 2017, a 26 percent increase from the prior year,” according to the Global Terrorism Index report. In neighboring Pakistan, ISIS affiliates were “responsible for 233 deaths.”

Meanwhile, the “two deadliest attacks in South Asia” in 2017 “were committed by the Khorasan Chapter of the Islamic State in Afghanistan and Pakistan, killing 93 and 91 persons respectively.”

Share of responsibility for terrorism-related deaths by Afghanistan’s ISIS affiliate in 2017. Source | Institute for Economics & Peace

On repeated occasions last year, Moscow and Tehran accused Washington of using unmarked helicopters to transfer Daesh fighters into the Haska Meyna region in Afghanistan where ISIS is active.

In March of 2018, Iranian Foreign Minister Javad Zarif told a congregation of diplomats, academics and journalists in Pakistan:

After Russian Foreign Minister Sergei Lavrov made a big deal out of ISIS’s presence in an April press conference in Pakistan, U.S. officials went into defense mode, with General John Nicholson, NATO’s Afghanistan commander, and the mission’s public-affairs director swearing that the Russian claims were exaggerated and arguing that there was “little evidence” that ISIS was expanding in the country.

Yet, according to an earlier report from the U.S. government-funded Voice of America, U.S. troops “routinely accompany the Afghan forces into battle against [ISIS].”

Flash forward to August, when NATO confirmed that it had killed ISIS’ leader in Afghanistan, Abu Sayeed Orakzai, as well as 10 other fighters. As NBC News noted at the time the U.S. estimated that there were about 2,000 ISIS fighters in the country, while local Afghan leaders claim that Orakzai was the “fourth” ISIS leader to be killed in less than a year.

0 thoughts on “An Unholy Alliance: Did the US-Backed UAE Fly ISIS Leaders into Yemen’s Killing Fields?”