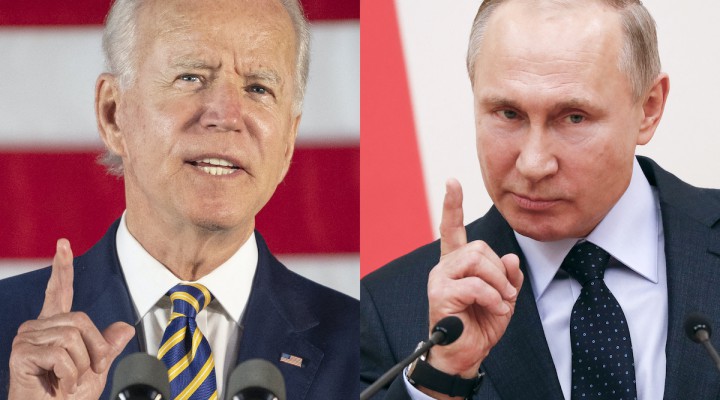 So Russian President Vladimir Putin, by himself, and United States President Joe Biden, surrounded by aides, finally had their secret video link conference for two hours and two minutes – with translators placed in different rooms.

That was their first serious exchange since they met in person in Geneva last June – the first Russia-US summit since 2018. For global public opinion, led to believe a “war” in Ukraine was all but imminent, what’s left is essentially a torrent of spin.

So let’s start with a simple exercise focusing on the key issue of the video link – Ukraine – contrasting the White House and Kremlin versions of what transpired.

The White House: Biden made it “clear” to Putin that the US and allies will respond with “decisive economic and other measures” to a military escalation in Ukraine. At the same time, Biden called on Putin to de-escalate around Ukraine and “return to diplomacy.”

Kremlin: Putin offered Biden to nullify all restrictions on the functioning of diplomatic missions. He remarked that cooperation between Russia and the US is still in an “unsatisfactory” state.

He urged the US not to shift “responsibility on the shoulders of Russia” for the escalation of the situation around Ukraine.

The White House: The US will expand military aid to Ukraine if Russia takes steps against it.

The White House: Biden did not give Putin any commitments that Ukraine will remain outside NATO.

Now for what really matters: the red line.

What Putin diplomatically told Team Biden, sitting at their table, is that Russia’s red line – no Ukraine in NATO – is unmovable. The same applies to Ukraine turned into a hub of the Pentagon’s empire of bases and hosting NATO weaponry.

Washington may deny it ad infinitum, but Ukraine is part of Russia’s sphere of influence. If nothing is done to force Kiev to abide by the Minsk Agreement, Russia will “neutralize” the threat on its own terms.

The root cause of all this drama, absent from any NATO narrative, is straightforward: Kiev simply refuses to respect the February 2015 Minsk Agreement.

According to the deal, Kiev should grant autonomy to Donbass via a constitutional amendment, referred to as “special status”; issue a general amnesty; and start a dialogue with the people’s republics of Donetsk and Lugansk.

Over the years, Kiev fulfilled less than zero of these commitments – while the NATO media machine kept spinning that Russia was violating Minsk. Russia is not even mentioned (italics mine) in the agreement.

Moscow always respected the Minsk Agreement, which establishes Donbass as an integral, autonomous part of Ukraine. Russia has made it very clear, over and over again, it has no interest whatsoever in promoting regime change in Kiev.

Before the video link, Kremlin spokesman Dmitry Peskov remarked: “Putin will listen to Biden’s proposals on Ukraine ‘with great interest.’” Even the White House did not propose for Kiev to obey the Minsk Agreement. So regardless of what Biden may have said, Putin, pragmatically, will adopt a “wait and see” approach, and then act accordingly.

In the run-up to the video link, maximum hype revolved on Washington seeking to stop Nord Stream 2 if Russia “invades” Ukraine.

What never transpires out of the “invasion” narrative, repeated ad nauseam across NATO, is that hawks overseeing an immensely polarized US, corroded from the inside, desperately need a war in what military analyst Andrei Martyanov calls “country 404,” a play on the error message when an online page or link doesn’t exist.

The crux of the matter is that European vassals must not have access to Russian energy: only American LNG.

And that’s what led the most extreme Russophobes in Washington to start threatening sanctions on Putin’s inner circle, Russian energy producers and even disconnecting Russia from SWIFT. All that was supposed to prevent Russia from “invading” Country 404.

US Secretary of State Tony Blinken – present at the video link – said a few days ago in Riga, Latvia, that “if Russia invades Ukraine,” NATO will respond “with a range of high impact economic measures.” As for NATO, it’s far from aggressive: just a “defensive” organization.

Lavrov said: “NATO refuses to consider our proposals on de-escalation of tensions and prevention of dangerous incidents … On the contrary, the alliance’s military infrastructure is moving closer to Russia’s borders … The nightmarish scenario of military confrontation is returning.”

So no wonder the heart of the matter for Moscow is NATO encroachment. The “invasion” narrative is crass fake news sold as fact. Even the CIA’s William Burns admitted that US intel had no intel to “conclude” that Russia will dutifully answer the War Inc prayers and finally “invade” Ukraine.

Still, that did not prevent a German sensationalist rag from presenting the full contours of the Russian blitzkrieg, when the actual story is the US and NATO attempting to push “country 404” to commit suicide by attacking the people’s republics of Donetsk and Lugansk.

It’s idle to expect the video link to produce practical results. As NATO remains mired in concentric crises, the current level of high tension between NATO and Russia is a gift from heaven in terms of maintaining the convenient narrative of an external Slavic evil. It’s also an extra bonus for the military-industrial-intelligence-media think tank complex.

The tension will continue to simmer without becoming incandescent only if NATO does not expand in any shape or form inside Ukraine. Diplomats in Brussels routinely comment that Kiev will never be accepted as a NATO member. But if things can get worse, they will: Kiev will become one of those NATO special partners, a desperately poor, hungry for territory, rogue actor.

Putin demanding from the US – which runs NATO – a written, legally binding guarantee that the alliance will not advance further eastward towards Russian borders is the game-changer here.

Team Biden cannot possibly deliver: they would be eaten alive by the War Inc establishment. Putin studied his history and knows that Daddy Bush’s “promise” to Gorbachev on NATO expansion was just a lie. He knows those who run NATO will never commit themselves in writing.

So that allows Putin a full range of options to defend Russian national security. “Invasion” is a joke; Ukraine, rotting from the inside, consumed by fear, loathing and poverty, will remain in limbo, while Donetsk and Lugansk will be progressively interconnected with the Russian Federation.

There will be no NATO war on Russia – as Martyanov himself has extensively demonstrated NATO wouldn’t last five minutes against Russian hypersonic weapons. And Moscow will be focused on what really matters geoeconomically and geopolitically: solidifying the Eurasia Economic Union (EAEU) and the Greater Eurasia Partnership.