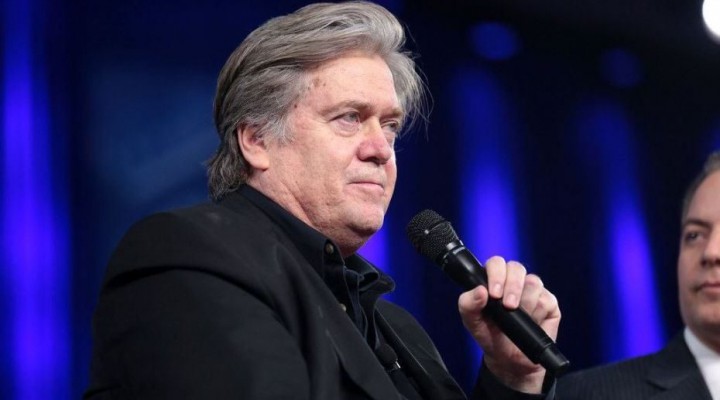 Bannon cannot have it both ways. If Soros, Bannon’s nemesis, has been guilty of violating the Logan and Neutrality Acts, so, too, has Bannon.

Donald Trump’s intermittent political “Svengali,” Stephen Bannon, has set about providing a support umbrella to a growing neo-Nazi and fascist alliance that he calls “The Movement.” Ironically, Bannon, who claims to lead a populist cause against globalism, is using globalist tactics to coordinate his goal of bringing to power and sustaining far-right governments in Europe, the Americas, the Pacific Rim, Asia, the Middle East, and Africa. Undoubtedly, Bannon is using the experience he acquired as an executive for the extremely globalist Wall Street firm, Goldman Sachs, to push his worldwide far-right political agenda.

Bannon has established a secretariat for The Movement in Brussels and a training academy for a far-right army of political leaders and activists at the Trisulti Charterhouse, an 800-year old Roman Catholic Cistercian Order monastery in central Italy. Bannon aims to create a right-wing version of George Soros’s Open Society Foundation, which is an organization that supports neo-liberalism and corporatism around the world.

From his newly-acquired headquarters in Trisulti, Bannon, who claims to be Catholic, has declared war on Pope Francis I. In an interview with NBC News on the grounds of the Vatican, Bannon declared that Francis’s “liberalism” was destroying the Catholic Church and he blamed the pontiff for the plague of pedophilia that has befallen Catholicism.

In fact, it is Bannon who has been linked to pedophilic activities, including the use of a rental house in the Coconut Grove neighborhood of Miami, Florida – leased by him and his former wife, Diane Clohesy – that was the scene of the alleged production of methamphetamines and pornographic films. The famed underwater cinematographer Lawrence Curtis, who rented the home after the Bannons moved out, told Shareblue Media that “the house was used to film pornography, had a constant flow of men, women — and even children — at the house and that blatant drug use was occurring at all hours of the night and day.”

Using the typical gaslighting tactics employed by the Trump administration – projecting on to enemies accusations made against them – Bannon appears to have enlisted the support of former Pope Benedict XVI, who has remained silent in retirement after being forced from the papacy in the church’s pedophilia scandal, to attack Pope Francis.

In a recent letter, his first public pronouncement since stepping down as Pope in 2013, Benedict issued forth from his secluded apartment on the grounds of the Vatican a litany of conservative Catholic attacks against “liberalism” in the church. Benedict’s points were suspiciously like those of Bannon, who happened to be in Rome when the former pope penned his letter.

Benedict blamed liberal tendencies in the Catholic Church for pedophilia problems, not the code of silence employed by himself and his fellow archbishopric right-wingers who presided over pedophile priests being transferred from diocese to diocese to avoid civil criminal prosecution. Benedict’s blaming the reforms of the Second Vatican Council of Pope John XXIII and the 1960’s “sexual revolution” for all the church’s present woes is pure “Bannonism,” the type of far-right codswallop usually found in the ruminations of Internet hate sites like Breitbart News, for which Bannon was served as editor.

It was Benedict’s pre-papal stint as the powerful chief of the Vatican’s Congregation for the Doctrine of the Faith that allowed major figures in the church, including Australian Cardinal George Pell – now imprisoned in Australia after his conviction for pedophilia – to get away with protecting pedophile priests from criminal prosecution. Church officials in the United States, Chile, Ireland and other countries conspired with Benedict in what was, perhaps, one of the largest criminal conspiracies in history.

Pope Francis has, unlike Benedict, taken a much firmer stance against pedophilia plaguing the priesthood. For example, Francis recently stripped the politically-influential former Archbishop of Washington, DC, Theodore McCarrick, of both his cardinal status and priesthood. McCarrick has powerful friends in right-wing circles, including the pro-fascist Catholic order, Opus Dei, which counts the former Blackwater mercenary firm’s founder, Erik Prince, among its supporters in the Washington area. Prince’s sister is Betsy DeVos, the Education Secretary for Donald Trump.

Bannon’s Movement, with its secretariat in Brussels, is under the aegis of Mischaël Modrikamen, leader of the Belgian People’s Party, a right-wing Zionist-oriented Walloonian party that is allied with right-wing parties in Flanders, Italy, Hungary, France, the Netherlands, Austria, the United Kingdom, Sweden, Finland, and Spain. It would appear, at first glance, that Modrikamen, who is Jewish, would have nothing to do with neo-Nazi grand alliances. The interwar years of the 1930s are replete with examples of cooperation between Zionists and Nazis, including, for example, the “Transfer Agreement” between the Zionist Federation of Germany, the Palästina Treuhandstelle (Palestine Trustee Office or Haavara), the Anglo-Palestine Bank, and Adolf Hitler that saw Germany grant permission and exit visas for German Jews to emigrate to Palestine in return for cash transfers into Nazi coffers. Other areas of cooperation were seen in Hollywood, where Jewish movie moguls agreed, for a period during the 1930s, to tamp down anti-Nazi motion pictures that were deemed offensive to the Third Reich.

Modrikamen helped introduce Bannon to like-minded fascists, who prefer the loaded title of “populists,” around Europe. For Bannon, setting up a training academy for fascist cadres is a major milestone for his global right-wing crusade. Bannon plans to teach future fascist leaders a history of the world that is focused on white European “Judeo-Christian” superiority over other religions and peoples, particularly Islam and Muslims. It is such a fractured view of history that prompted deadly terrorist attacks by Bannon’s fellow-travelers in Oslo in 2011; Charleston, South Carolina in 2015; Quebec City, Canada and Charlottesville, Virginia in 2017; Annapolis, Maryland in 2018; and Christchurch, New Zealand in 2019.

Bannon may have stepped over the legal limits in his attacks on Pope Francis from Vatican and Italian soil. The Holy See is a recognized nation-state by the United States and Francis is its internationally-recognized head of state. The US accredited US ambassador to the Vatican is Callista Gingrich, the wife of Republican former US House of Representatives Speaker Newt Gingrich. Bannon’s involvement as a private citizen in what amounts to a blatant attempt to create a political rift within the Vatican hierarchy and the overthrow of the Holy See’s head of state is a violation of the Logan Act of 1799, a law that forbids private US citizens from making foreign policy, without authorization, on behalf of the United States government.

The Logan Act is very clear:

Bannon is also in clear violation of the US Neutrality Act, which forbids American citizens from participating in hostile acts against nations with which the United States is at peace.

Bannon cannot have it both ways. If Soros, Bannon’s nemesis, has been guilty of violating the Logan and Neutrality Acts, so, too, has Bannon.

Bannon appears to be comfortable in his new surroundings of the Trisulti monastery. However, based on his flagrant violation of US law, Bannon should, instead, be enjoying the confines of a US Bureau of Prisons cell in the United States.