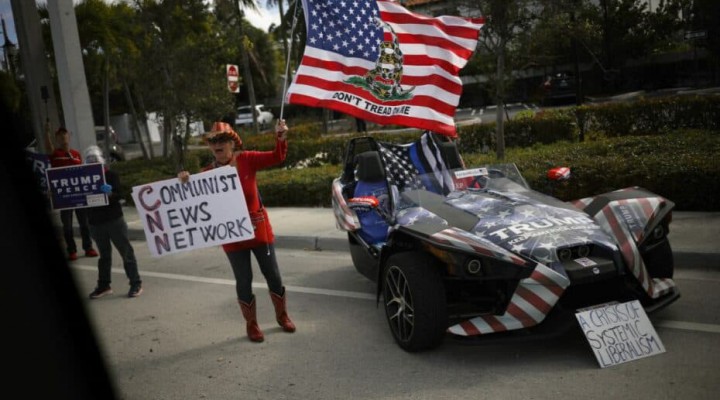 It has been under governments committed to serving the needs of the people that the world has seen the advancement of public health, social security, reliable transportation services, and civil rights protections for minorities.

Lying at the heart of the increasingly discredited ideology of Trumpism is the bankrupt politics of libertarianism. Like the old joke about the dog chasing the car and finally catching up with it, the seething crew of armed and deranged Donald Trump supporters who managed to temporarily seize control of the upper and lower chambers of the U.S. Congress on January 6 were unsure of what to do with their briefly captured prize. Some decided to rifle through Senate desks in search of some holy grail of secret documents. Others were content with snatching laptop computers from offices. A few felt encumbered to aim canisters of destructive caustic bear spray at priceless oil paintings of Presidents Thomas Jefferson and John Quincy Adams.

Libertarians have as some of their heroes some of the most deranged economists, philosophers, and politicians in recent history. At the top of that list of deplorables is sociopathic writer and godmother of modern libertarianism Ayn Rand. A critic of programs she deemed “socialist,” including President Franklin D. Roosevelt’s Social Security system and President Lyndon B. Johnson’s Medicare, she did not hesitate to avail herself of both “socialistic” federal programs in the 1970s. During the 1973 Israeli-Arab War, Rand said that the war involved “civilized men,” Israelis, fighting “savages,” the Arab nations. Rand also justified European colonialists seizing the land of the indigenous native peoples of the Western Hemisphere. Even though Rand was a supreme hypocrite and racist, her vile beliefs seeped into the Republican Party’s “libertarian” wing, partially represented by Arizona Senator Barry Goldwater and President Ronald Reagan, and which later developed into the Tea Party movement and Trumpism.

The Libertarian Party of the United States represents nothing more than parlor room discourse by major political party rejects. Libertarians have only achieved political power by nesting themselves inside established political parties having a record of electoral success and governance. This has been the case with Trump, disgraced House of Representatives Speaker Newt Gingrich, Pat Buchanan, Kentucky Senator Rand Paul, and Paul’s father, Ron Paul, the latter having quixotically run for President on the Libertarian Party ticket in 1988, before becoming a Republican and being elected to the U.S. House from Texas. Paul became one of the ideological leaders of the anti-government Tea Party movement. Paul and other Republican leaders embraced the laissez-faire economic doctrines of such anti-government and pro-corporate economists as Friedrich Hayek, Murray Rothbard, Ludwig von Mises, Charles Murray, and economist, Milton Friedman. This resulted in increasingly rightward-leaning anti-labor policies by the administrations of George W. Bush and Trump. While Paul and his son, Senator Paul, have nothing but hostility for the social democratic-inspired government services provided in the Nordic nations, Germany, and Canada, they have no problems with governments like those of Chilean dictator Augusto Pinochet, Brazilian President Jair Bolsonaro, and Britain’s Boris Johnson that embrace the corporate fascist policies of Friedman and the Austrian School economists Hayek and von Mises.

Libertarian opposition to labor rights, public health, and environmental controls has resulted in poverty-level wages, the spread of disease – including the present Covid virus – and poisonous air and water.

Libertarians and the U.S. “militias” who support them through threats to public safety and armed insurrection constantly wail against government. They are also the first to demand government services after they lose their jobs or see their homes and communities devastated by hurricanes, tornadoes, and earthquakes. Libertarian politicians hate government but have offered nothing even halfway feasible to replace it. Representative government has been humankind’s best endeavor for the common health, welfare, and security of the people since the days of democratic Athens, the Roman Republic, and the Althing of the Icelandic Commonwealth.

Governments that represent the people who install them into power are also subject to demands for change. In 1970, Cabinets around the world included traditional portfolios of foreign affairs, defense, justice, finance, labor, agriculture, commerce, education, home affairs or interior, posts and telecommunications, health, and housing. Positions such as ministries of housing and health were relatively new in many countries. In the United States, the Department of Health, Education, and Welfare was established in 1953 by President Dwight D. Eisenhower, a Republican. It was first proposed in 1923 by President Warren G. Harding, another Republican. Neither Eisenhower nor Harding would recognize the Republican Party of today, with is infiltrated at the highest levels by anti-government libertarians or every stripe, from “flat Earth” conspiracy types to Ayn Rand followers.

When one examines Cabinet-level ministries of today it is clear that governments around the world responded to general and more specific needs of the people. There are ministries for the environment, infrastructure and web connectivity, mental health, addictions, and well-being, cyber safety, indigenous peoples, early child learning, innovation and better regulation, suburban rail services, veterans’ services, disability services, family violence and women, child protection, seniors and aging, multi-cultural affairs, medical services, national unity, climate change, sustainable development, disaster management, workplace safety, the arts, and homelessness. Libertarians argue all of this represents “big government.” They are dead wrong. Expansion of government services to meet modern challenges and serve the people is responsible government, not big government. Those who argue otherwise display their selfishness and cruelty in ignoring the needs and pleas of those who require assistance to equally enjoy the fruits of responsive government and society.

Trump insurrectionists may have temporarily damaged and destroyed the chambers of the U.S. Capitol but that stands in stark contrast to the possible permanent damage Trump officials wrought against federal government departments and agencies over four years of libertarian-driven policies.

Trump’s last-minute full pardon granted to his one-time chief strategist and campaign manager Steve Bannon sends a signal to all of Bannon’s fellow fascists around the world that Bannon and his embryonic “Fascist International” are back in business. Bannon’s poisonous focus of “killing off the administrative state” has not only found a home in the U.S. Republican Party but also the Libertarian, Direct, Democratic (LDD) of Flemish Senator Jean-Marie Dedecker and the Wallonian People’s Party of Mischaël Modrikamen, the latter being a co-founder of Bannon’s Brussels-based global fascist organization called “The Movement.” Other Bannon-inspired right-wing libertarian parties include the People’s Party of Canada, which split from the Conservative Party as a far-right and anti-government alternative party; the Go Tax Evaders! Party of Italy; the Capitalist Party of South Africa; and the anti-taxation 5.10 party in Ukraine. The foolhardiness of the libertarian agenda contributed to the collapse of libertarian parties in Argentina, the Canadian Province of Manitoba, France, New Zealand, and Poland. Far from being a clever strategist, Bannon is a pursuer of lost causes, as libertarianism has, time after time, been shown to be a fraud.

Libertarianism for many of its backers is a means to an end. Promoters of this lost political cause are more interested in pushing dubious gold and silver investments, Ponzi scheme operations and similar pyramid schemes, fraudulent medical cures and devices, and bogus ventures for real estate and “pump and dump” stocks.

It has been under governments committed to serving the needs of the people that the world has seen the advancement of public health, social security, reliable transportation services, and civil rights protections for minorities. Libertarianism offers the world nothing more than greed and selfishness.

0 thoughts on “The Scourge of Anti-Government Libertarianism”