HOME / WORLD / Clash of Civilizations 2.0 Sponsored by Prince and Bannon 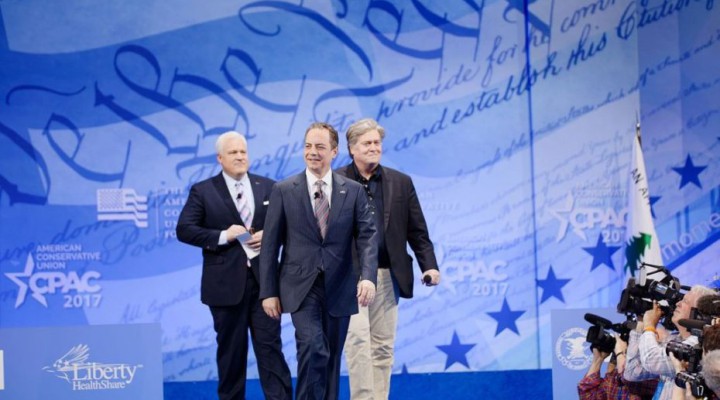 Bannon, Prince, and other far-rightists are now attempting to impose on their followers and fellow-travelers the same sort of “groupthink” Nazi Propaganda Minister Joseph Goebbels applied to Germany.

Blackwater mercenary company founder Erik Prince and the self-appointed leader of Fascist International, Steve Bannon, have joined forces and dusted off the old discredited neo-conservative theory of “Clash of Civilizations,” to threaten global stability with religious and ethnic nationalism.

One of the more important revelations in former Justice Department Special Counsel Robert Mueller’s report on the 2016 election is the close working relationship Bannon established with Prince. Sensing fertile political ground for their far-right beliefs, Bannon and Prince have established, under the aegis of their professed Catholicism, a movement that threatens both the current pope and the European Union.

The Clash of Civilizations was the main tenet of Harvard University’s Samuel P. Huntington. Huntington also defended the pro-fascist Mexican Institutional Revolutionary Party (PRI) of Mexico and the military dictatorship of Brazil. Huntington was also a champion of South Africa’s apartheid state and advocated its “reform” rather than its abolishment. Huntington’s approaches to Latin American immigration into the United States serves a basis for the draconian anti-immigration policies of Donald Trump and his “immigration czar,” Stephen Miller. Huntington saw Europe and Western Europe, including Croatia and Slovenia, along with Australia and New Zealand as a “core civilization” against the rest of the world. Huntington made it a point to exclude from the core civilization the Christian Orthodox nations of the Balkans, including Greece, as well as Belarus, Russia, Ukraine, and Armenia.

To advance political domination by far-right political parties and politicians, Bannon has been busy establishing a training academy for far-right wing Christian zealots at the Trisulti Charterhouse in Collepardo in central Italy. Bannon has admitted that he is following George Soros’s global playbook. Instead of a neo-liberal global network, like that of Soros, Bannon is creating a far-right political movement in Europe that will extend its tentacles around the world, primarily in Huntington’s “core civilization” countries plus Brazil, Chile, and Argentina. With his political group, called “The Movement” in operation in Brussels and targeting upcoming European Parliament elections, Bannon has taken advantage of a schism within the Roman Catholic Church to convincing those opposed to Pope Francis I to permit him to set up shop in the 13th century monastery in Collepardo.

Bannon is clearly setting the stage for a revised “clash of civilizations” between Judeo-Christianity and the rest of the world. Fascism is seen as the preferred political system for the Western “core.”

Bannon’s colleague in the 2016 Trump campaign, Michael Ledeen, the notorious neo-conservative, wrote a book in 1972 that promotes the fascist political philosophy. Titled “Universal Fascism: The Theory and Practice of the Fascist International, 1928–1936,” Ledeen describes in glowing terms Mussolini’s efforts to create an international Fascist movement in the late 1920s and early 1930s. According to an interview Ledeen gave to the neo-con “National Review” in 2002, the Ledeen Doctrine boils down to the following credo: “Every ten years or so, the United States needs to pick up some small crappy little country and throw it against the wall, just to show the world we mean business.” Mussolini’s template has largely been adopted by Bannon, who, still has, along with arch neo-con national security adviser John Bolton, still have Trump’s ear on foreign policy.

Bannon is attempting to purge the nexus of his Judeo-Christian core civilization of perceived enemies, who include Vatican loyalists of Pope Francis. Bannon – in cooperation with the extremely conservative Cardinal Raymond Burke and former Pope Benedict XVI – has been waging a political jihad against Pope Francis. Bannon believes the current pontiff to be a dangerous liberal and a “Cultural Marxist,” who supported many of President Barack Obama’s policies. Bannon and a right-wing Catholic group close to Burke, the Institute of Human Dignity, or Dignitatis Humana Institute, which runs Bannon’s new headquarters at the Trisulti Abbey, opposes Francis’s goal of avoiding a “clash of civilizations” between Christianity and Islam.

Bannon, in cooperation with Cardinal Raymond Burke and former Pope Benedict XVI, has been waging a war against Pope Francis I. Bannon sees Francis as a dangerous liberal and a “Cultural Marxist,” who supported President Barack Obama’s policies. Bannon and a right-wing Catholic group close to Burke, the Institute of Human Dignity, or “Dignitatis Humana Institute,’ which owns Bannon’s new headquarters at the Trisulti Abbey, opposes Francis’s goal of avoiding a “clash of civilizations,” particularly one between Christianity and Islam.

Bannon’s financial firm, Bannon & Company, is investing in Bitcoin and other cryptocurrencies, believed by many financial experts to be a giant scam. Cryptocurrencies are favored by neo-Nazis and fascists to fund their activities without the worry of financial surveillance from bank regulators and financial intelligence agencies. Bannon, as a former Goldman Sachs executive, understands how to avoid financial network roadblocks.

One of the mandatory studies at Bannon’s academy for neo-Nazis will most certainly be on the works and thoughts of Julius Evola (1898-1974), a far-right Italian philosopher, who provided the inspiration for several fascist terrorist attacks in Italy during the 1960s, 70s, and 80s, including the deadly Bologna central rail station bombing in 1980. Bannon is a promoter of Evola’s doctrine, which is known as Traditionalism. The followers of Evola are called the “Children of the Sun” and they include adherents of two leading neo-Nazi parties in Europe: Golden Dawn in Greece and Jobbik in Hungary. Other Traditionalist philosophers, all of whom dabbled in Indo-European Aryan occultism and, to varying degrees, embraced fascism in the interwar years, include Romanian Mircea Eliade (1907-1986), French/Egyptian René Guénon (1886-1951), and Ceylonese (Sri Lankan) Ananda Coomaraswamy (1887-1947).

US neo-Nazi leader and “alt-right” term creator, Richard Spencer, a college friend of Trump’s anti-immigration czar, Stephen Miller, is also a follower of Evola. Evola’s writings were an inspiration to Benito Mussolini Fascist movement and Heinrich Himmler’s Schutzstaffel (SS). Evola even visited SS headquarters in Germany to proselytize his philosophy of fascism to the SS rank and file.

Bannon’s and Prince’s intertwined political finances were exposed during the 2016 presidential campaign. Prince donated some $150,000 to the pro-Trump PAC “Make America Number 1 in 2016.” In turn, the PAC funneled hundreds of thousands of dollars to Cambridge Analytica and Glittering Steel, a video production company. Bannon co-founded both companies. Bannon was also buoyed by generous funding from hedge fund billionaire Robert Mercer. Currently, with a seemingly endless supply of funds, Bannon is waging a far-right insurgency in Europe involving neo-Nazi, fascist, and right-wing Catholic organizations close to Opus Dei.

Erik Prince abandoned the conservative Calvinism of his auto parts-manufacturing wealthy father to embrace Catholicism, Opus Dei, the Sovereign Military Order of Malta – based in Rome and a rival-laden headache for Pope Francis – and the Legionnaires of Christ. Opus Dei was founded by Spanish priest Josemaría Escrivá in 1928 as a pro-fascist and pro-Francisco Franco answer to the more liberal-minded Jesuits. It is noteworthy that Pope Francis, the first Jesuit pontiff, is currently experiencing a virtual civil war within the catholic Church and Vatican hierarchy, spurred on by the likes of Bannon, Prince, former Pope Benedict, and other right-wing members of the College of Cardinals.

Bannon, Prince, and other far-rightists are now attempting to impose on their followers and fellow-travelers the same sort of “groupthink” Nazi Propaganda Minister Joseph Goebbels applied to Germany. In his seminal work, Yale University professor Irving Janis summed up “groupthink,” particularly how groups can, conversely to bringing out the best in people, also bring out the worst. Janis’s 1982 book, “Groupthink,” describes the phenomenon by quoting 19th century German philosopher Friedrich Nietzsche: “Madness is the exception in individuals but the rule in groups.” Europe’s current fascination and widespread support for political parties that were largely banned and shunned after the Nazi defeat in 1945 have created an environment where Bannon, Prince, and their collaborators find ready audiences for their extremism. In such climates, a strategy of tension permits a clash of civilizations, which is nirvana for the neo-cons and extreme right.

The recent deadly Christchurch mosque attacks appear to have been the first act in a strategy of tensions conflict being waged by the far-right. The Easter Sunday bombings of churches in Negombo, Batticaloa, and Colombo, Sri Lanka, as well as three five-star hotels in Colombo – killing well over 300 people, were reportedly claimed by a hitherto unknown group called the National Thowheed Jamath or National Monotheism Organization. Sri Lanka’s government alleged the attacks were in retaliation for the Christchurch mosque bombings. Some things are known about the group claiming it carried out the attacks in Sri Lanka. It is not connected operationally to either the Islamic State or Al Qaeda, although the Islamic State made unverifiable claims of responsibility. New Zealand Prime Minister Jacinda Ardern said that New Zealand’s intelligence has no indication that the Sri Lanka attacks were in retaliation for the Sri Lanka attacks. It should be noted that New Zealand, as a member of the FIVE EYES signals intelligence alliance, has access to countless communications intercepts.

While flames leaped from Paris’s iconic Notre Dame Cathedral on April 15, a fire broke out at the Al Aqsa mosque in Jerusalem, Islam’s third-holiest shrine. In the weeks preceding the Notre Dame fire, vandals broke into Notre-Dame-des-enfants in Nîmes, France and smeared excrement on the crucifix and walls of the church. In March, a fire broke out at another famous Paris church, Saint-Sulpice. In February, a fire broke out in Lavaur Cathedral in Lavaur, France. That fire was preceded by vandalism of Saint Nicolas in Houilles and Saint Nicolas in Maisons-Laffitte in Yvelines.

Arson also destroyed three African-American churches in Opelousas, Louisiana. The son of a sheriff’s deputy was arrested for arson. Louisiana has recently been the scene of renewed activities by Ku Klux Klan and other white supremacist groups.

All of the incidents – in New Zealand, Sri Lanka, France, and Louisiana – those confirmed as terrorism and those for which the jury is still out, should be viewed through the lens of the strategy of tensions and a final showdown between Christianity and Islam advanced by Bannon, Prince, and their supporters in Brussels and the Trisulti monastery.

The world has seen this particular play before. From the late 1960s to the 1980s, over two thousand people died in terrorist attacks blamed mainly on left-wing terrorists, including the Italian Red Brigades and West German Red Army Faction. The victims included the former Christian Democratic Prime Minister of Italy, Aldo Moro. The deadliest attack was the bombing of the Bologna rail station in 1980. Originally, there was an attempt to blame all the attacks, mostly bombings, on the left-wing groups. In fact, most of the attacks were carried out by neo-fascist groups hoping to have the Communists blamed. Inquiry commissions later determined that the neo-fascists and far-left groups all had links to the Central Intelligence Agency – which once employed Erik Prince’s Blackwater as a contractor – and the intelligence services of NATO members. It was the late Turkish Prime Minister, Bulent Ecevit, who revealed the name of the sinister association of NATO spies and false flag terrorists: Gladio.

0 thoughts on “Clash of Civilizations 2.0 Sponsored by Prince and Bannon”