HOME / WORLD / President Joe Biden One Year On… America Is Back, With More Aggression Than Ever 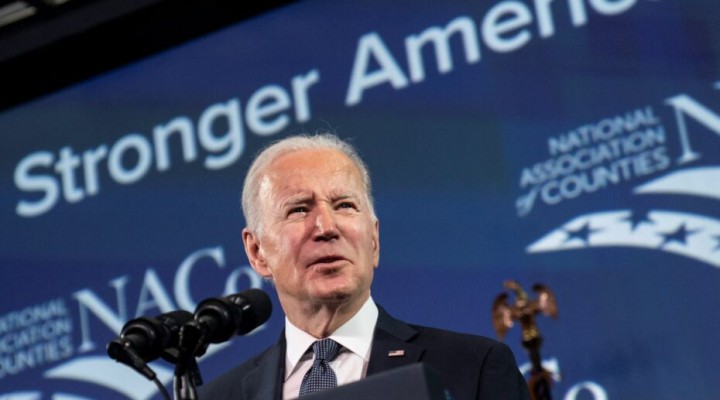 Biden hasn’t started a war yet. But he’s still got three years to go and the first one fills the outlook with dread.

This weekend marks Joe Biden’s first year in office since his inauguration on January 20, 2021, as 46th president of the United States. In that time, it’s quite staggering how rapidly relations have deteriorated between the U.S. and Russia on the one hand and China on the other.

Right now, Europe is on the cusp of a war breaking out between a U.S.-backed regime in Ukraine and Russia. The volatile situation has the potential to drag the U.S. and other NATO powers into a proxy war with Russia, if not a full-blown international military conflict that could escalate into a nuclear conflagration.

Washington’s baleful relations with Beijing have been eclipsed by the recent stand-off with Russia. But make no mistake, U.S.-China tensions have also been heightened with the attendant risk of war. Much of the tension has been increased by the Biden administration’s provocations towards China over the breakaway island province of Taiwan. Under Biden, U.S. arms sales to Taiwan have burgeoned as have the large-scale maneuvers of American military forces near Chinese territory – in the name of “freedom of navigation”.

Let’s rewind to Biden’s inauguration on that cold, sunny day of January 20 last year. There was the usual jamboree that often accompanies a new Democrat president. We saw it when Bill Clinton and Barack Obama were installed in the White House. Likewise, with Biden’s tenure, there were expectations of a more professional president, a more multilateral president, a more proficient president on foreign policy, and, dare we say, a more refined and law-abiding president. As usual, there was rosy rhetoric about how Biden would recover America’s international image that had been tarnished under his boorish predecessor, Donald Trump.

Biden declared over and over again that “America was back” as he took office. European leaders swooned at the prospect of again having an American ally who respected them. The expectation was that the “adults were back in control” of U.S. policy (whatever that’s supposed to mean) and that the feathers ruffled by Trump would be smoothed.

Strategic Culture Foundation can take pride in not having bought into any of the wishful thinking regarding a Biden administration. We predicted in several articles at an early stage of his presidency that international relations would take a serious turn for the worse under Joseph Robinette Biden Jr.

Take, for example, this interview on November 23, 2020, with Christopher Black. It was headlined: “A Biden Administration Will Be Dominated by More U.S. Aggression”. It predicted that the world “would see more intensified militarism and aggression under a Joe Biden presidency than under the outgoing Trump administration.”

Another observation in the same interview was “the Biden administration will be bent on war… in particular against Russia and China… we can expect U.S. provocations to accelerate.”

In a subsequent column, on January 28, 2021, Strategic Culture Foundation highlighted how the Biden administration would ramp up efforts to sabotage the Nord Stream 2 gas project between Russia and the European Union. This unspoken objective has come to a head in the present crisis over Ukraine. It is driving the geopolitical dynamics behind the conflict between the U.S. and Russia, as explained in a later SCF article published on June 8, 2021, – some five months before the crisis erupted in Western media coverage.

Virtually every U.S. president has gone to war or overseen some form of criminal foreign aggression. Barack Obama – the “hope and change president” went on to unleash American wars and bombing in seven countries. Obama’s vice president was Joe Biden who owns some of the past criminality. Donald Trump didn’t start any new American wars but he too was up to his neck in waging aggression abroad.

Republican and Democrat presidents are all the same. They are tools of U.S. imperialism.

So far, Biden hasn’t actually started a new war. He has continued some of the existing militarism. And if he keeps going in the same mode, a war against either Russia or China or both is a “distinct possibility” to use Biden’s words this week about an alleged Russian invasion of Ukraine.

Underpinning the intensified aggression under Biden is the objective historic condition of failing U.S. imperial power. This has nothing to do with whether the president is Democrat or Republican. From the early post-Cold War years we had the Wolfowitz Doctrine, coined under a Republican president as it happened, that set out the objective of staving off U.S. imperial decline and in particular staving off the challenge to U.S. power from a resurgent Russia or an ascendant China.

Under prevailing U.S. establishment politics and the national security state, the Cold War policy against Russia and China would inevitably continue. American power relies fundamentally and intrinsically on confrontation with perceived rivals who must be treated as enemies to be subjugated.

It just so happens that Biden and his administration are more in tune with the U.S. political establishment and the national security state than, for example, the maverick egomaniac Trump. That’s why there has been a more determined and discernible deterioration in U.S. relations with Russia and China over the last year.

Biden hasn’t started a war yet. But he’s still got three years to go and the first one fills the outlook with dread.

One final note: Strategic Culture Foundation has come under fire from the U.S. authorities who have banned America-based writers from publishing articles in our journal. The U.S. government accuses SCF of being an agent of Russian foreign intelligence. See this recent hit-job on ABC news which cites some of our headlines without providing links to the articles. SCF is not an agent of the Russian government. It is an independent journalistic forum for analysis and comment. The prescience of our articles cited above on exposing the criminality of U.S. imperial power would suggest that is the real reason why SCF is being targeted with American slander and sanctions.

0 thoughts on “President Joe Biden One Year On… America Is Back, With More Aggression Than Ever”