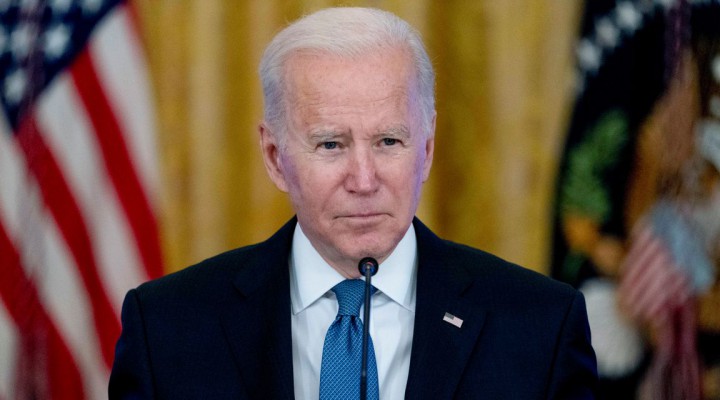 US President Joe Biden accused Russian leader Vladimir Putin of “wanting things he cannot get”. He was referring to Moscow’s security demands in Europe with regard to the US-led NATO military alliance.

Looks like the man in the White House is inadvertently doing a bit of self-projection. It’s Biden who seems to want things that he can’t get.

Top of that wish-list is for Russia to invade Ukraine. If that sounds a bit illogical, then why is Biden so obsessed about predicting an imminent military move by Russia against its western neighbor?

The American president and his administration have been warning that Moscow could order an assault on Ukraine “any day”. Well, days and indeed weeks go by and there is no outcome as touted.

Biden has also predicted that Putin doesn’t want to pursue diplomacy and that the Russian leader is driven to make war. Then a few days later, Putin hosted French President Emmanuel Macron in Moscow for marathon talks about resolving tensions.

Russia has repeatedly rubbished the invasion claims – that have largely emanated from the United States – as baseless hysteria. President Putin said this week he has no intention of escalating the tensions over Ukraine.

Moscow says that troops marshaled within Russia’s borders are not a threat to any neighboring state. The premise of American accusations about internal Russia’s military maneuvers is absurd. The precedent for interference it would establish is an affront to any nation’s sovereignty.

Even the Ukrainian government and security officials have pushed back against the American claims of an imminent Russian invasion.

Nevertheless, in spite of the lack of evidence and rationale, and in spite of a United Nations’ rebuke to desist from such inflammatory rhetoric, Washington keeps insisting on making its bogus predictions of Russian aggression.
So, when is this gargantuan hoax going to be held to account? This contemporary version of “crying wolf” should have political and legal consequences for the hoaxers.

Arguably, the Biden administration’s media campaign regarding Ukraine is a cynical exercise in manipulating public perception and manufacturing a crisis. Washington wants Russia to invade Ukraine in order to justify a US policy of division and conflict. American imperial ambitions for hegemony must rely on inciting tensions and ultimately conflict within Europe and towards Russia.

A specific objective for American global ambitions is to sabotage the strategic energy trade between the European Union and Russia.

The problem for the US is that its charade of Russian aggression is simply not working. That’s because Moscow has no intention of starting a war with Ukraine or anyone else for that matter.

Sure enough, Russia has put down red lines regarding its national security. They include no further eastward expansion of the NATO bloc and the exclusion of offensive American strike weapons from near Russia’s borders. To most reasonable observers, those demands are hardly signs of “aggression”. In fact, they sound like a plausible basis for discussing a new security framework for Europe.

It seems that because the Biden administration can’t get what it wants – that is, a Russian invasion of Ukraine – it is hellbent on forcing or fabricating one.

While European leaders this week anxiously appeal for more diplomacy to avert confrontation, it is salient and damnable that Washington is desperately militarizing the tensions. Biden has ordered more troops to deploy in Eastern Europe provocatively under the pretext of “defending allies from Russian aggression”. His administration is airlifting plane-loads of lethal weaponry to Ukraine which has the seeming intended effect of undermining any chance of finding a peaceful settlement to the Ukrainian civil war that has been simmering since the CIA-backed coup in Kiev in 2014.

It is significant that Washington and London are the most hawkish advocates for trying to impose harsher economic sanctions against Russia. This is while the United States and Britain are taking the lead in militarizing Eastern Europe and talking up belligerence towards Moscow. The combined Anglo-American stance appears to be one of goading Russia into an armed conflict which can then be used as a pretext for sabotaging Europe’s energy relations with Russia.

The danger is that the longer this American charade continues and the fantasy over Russia’s alleged invasion becomes more and more apparent, the risk increases of the US forcing a provocation for war. Perhaps not intended as a direct war, more likely as a proxy war using Ukraine.

President Biden and his administration, as well as the entire US corporate media, are at risk of being exposed in the eyes of the world as war hoaxers. Included in that list of criminal warmongers is Britain.

This portends Biden’s biggest foreign policy failure which, hard to believe, exceeds even the historic US defeat in Afghanistan.

“Do You Want a War Between Russia and NATO?”

US Again Tries To Pass Off Government Assertions As Evidence