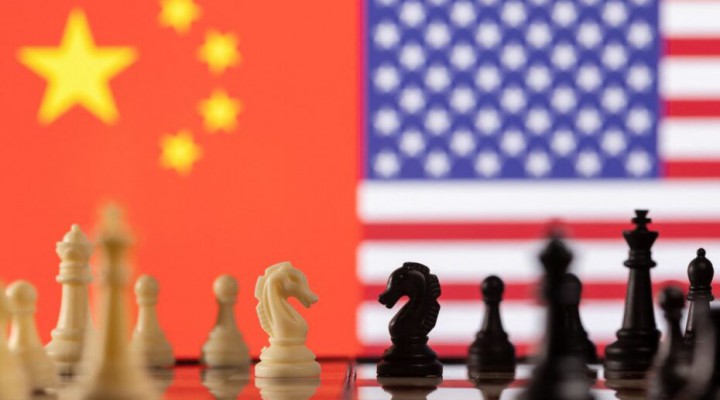 The key to China’s security riposte to the U.S. is linked to two words that go unstated in U.S. formal policy documents, but whose silent presence nevertheless suffuses and colour-washes the text of the 2022 National Defence Authorisation Act.

The term ‘containment’ never appears, neither does the word ‘encirclement’. Yet, as Professor Michael Klare writes, the Act “provides a detailed blueprint for surrounding China with a potentially suffocating network of U.S. bases, military forces, and increasingly militarized partner states. The goal is to enable Washington to barricade that country’s military inside its own territory; and potentially to cripple its economy in any future crisis”.

What the earlier patchwork of U.S. China measures lacked, until now, has been an overarching plan for curbing China’s rise, and so ensuring America’s permanent supremacy in the Indo-Pacific region: “The authors of this year’s NDAA” however, “were remarkably focused on this deficiency, and several provisions of the bill are designed to provide just such a master plan”.

These include a series of measures intended to incorporate Taiwan into the U.S. defence system surrounding China. And a requirement for the drafting of a comprehensive “grand strategy” for containing China “on every front”.

A ‘sense of Congress’ measure in the Act provides overarching guidance on these disparate initiatives, stipulating an unbroken chain of U.S.-armed ‘sentinel states’ — stretching from Japan and South Korea in the northern Pacific to Australia, the Philippines, Thailand, and Singapore in the south, and India on China’s eastern flank — meant to encircle and contain the People’s Republic. Ominously enough, Taiwan, too, is included in the projected anti-China network.

Accordingly, the measure advocates closer military coordination between the ‘two countries’, and the sale of increasingly sophisticated weapons systems to Taiwan, along with the technology to manufacture some of them.

“And here’s the new reality of the Biden years”, writes Klare: “[Taiwan] is now being converted into a de facto military ally of the United States. There could hardly be a more direct assault on China’s bottom line: that, sooner or later, the island must agree to peacefully reunite with the mainland; or face military action”.

This is not new. The China containment notion reaches back to Obama’s pivot to Asia (and back even further), but it was the during the Trump Administration that the Taiwan pretext began seriously to be ramped. Pompeo upped the ante by approving visits to Taipei by senior officials.

What is different now is that the Biden Administration has not only not reversed the Trump-Pompeo policies, but rather has embraced the Pompeo encirclement agenda, with a vengeance. This is underlined through a provision in the Act insisting that the U.S.’ 1982 agreement to reduce the quality and quantity of its arms transfers to Taiwan, is no longer valid due to China’s “increasingly coercive and aggressive behaviour” toward the island.

The point here is that ‘encirclement’ and ‘containment’ effectively have become Biden’s default foreign policy. The attempt to cement-in this meta-doctrine currently is being enacted out via Russia (as the initial step). The essential buy-in by Europe is the ‘party-piece’ to Russia’sphysical containment and encirclement.

The EU is coming under intense pressure from Washington to commit to sanctions – the financial ‘mode’ to encirclement – as EU officials negotiate what would be considered their ‘red line’. Jake Sullivan however, made the new doctrine and what he expects from Europe very clear last November, when he said: “we want the terms of the [international] system to be favourable to American interests and values: It is rather, a favourable disposition in which the U.S. and its allies can shape the international rules of the road on the sorts of issues that are fundamentally going to matter to the people of [America] …”.

Biden’s threat of unprecedented, harsh sanctions however, has brought forth a warning of a completely unexpected source – as both the U.S. Treasury and the State Department have warned Blinken that the envisaged sanctions would hurt U.S. allies (i.e. Europeans) more than they would hurt Russia, and that their imposition could even trigger a counter-productive global economic crisis that would touch both the U.S. and European consumer, via increased energy prices – thus giving a sharp kick to already record U.S. inflation rates.

In short, Europe might also face a U.S.-led insurgency war fought from its territory, spilling over and across other states; giving birth to a new breed of radical ‘jihadis’, and dilating around Europe. And to yet a new wave of sophisticated weaponry (as happened in the wake of the Afghan war) circulating amongst opposition groups, as Stinger missiles were sold on to who knows whom (and then had later to be bought back from them).

In a likely planted piece, the NY Times reports that:

For years, U.S. officials have tiptoed around the question of how much military support to provide to Ukraine, for fear of provoking Russia.

Now, in what would be a major turnaround, senior Biden administration officials are warning that the United States could throw its weight behind a Ukrainian insurgency should Putin invade Ukraine.

How the United States, which just exited two decades of war in Afghanistan, might pivot to funding and supporting an insurgency from just finishing one – is still being worked out: “Biden has not determined how the United States might arm insurgents in Ukraine; or, who would conduct the guerrilla war against Russian military occupation. Nor is it clear what Russia’s next move might be … But Biden Administration officials have begun signalling to Russia [that eventually it] would find the costs of an invasion … prohibitively expensive in terms of military losses.

“If Putin invades Ukraine with a major military force … And if it turned into a Ukrainian insurgency, Putin should realize that after fighting insurgencies ourselves for two decades, we know how to arm, train and energize them”, said James Stavridis, a retired four-star Navy admiral, who was the supreme allied commander at NATO.

This talk in the U.S. of an insurgency mounted via Ukraine has acquired a frenetic quality. Discussion has slipped into neurosis as the U.S. mainstream melts-down at any suggestion of selling out the cause of democracy and liberal values. See here the reaction when the Tucker Carlson’s guest said, “the world is perched on the edge of an abyss. We may soon see the worst combat in Europe since WW2 – killing thousands of people and raising the likelihood of nuclear war. It didn’t have to be this way”.

It’s as if all the many failures of the Biden Administration are being channelled and vented through the narrow atonement of ‘saving Ukraine’.

Naturally, that is not the end to the U.S. project: With ‘containment’ and ‘our democracy’ so much at the forefront of Washington liberal thinking, once Russia has been Gulliverised, and China put on notice, the subsequent containment and encirclement of Iran would seem a foregone conclusion.

Especially, as the encirclement project for China is already underway. And it is not confined to the Indo-Pacific. It is playing out, even today, in the Middle East as an attempted double containment both of Iran and China. The recent drone attack on UAE (claimed by the Houthis) is not unconnected with those targeted states’ bigger struggle to break U.S. encirclement.

One key component to global commerce in upcoming years will be China’s Maritime Silk Road – a shipping route which inevitably pivots around the Horn of Africa, and its choke-point of the Bab al-Mandab Strait, off Yemen’s coast. Yemen therefore becomes a key hub for the U.S.’ ability to ‘contain’ and deny China its’ Maritime Silk Road.

In this context, the UAE plays the Mid-East strategic counterpart to ‘Taiwan’ in the Pacific, becoming the geographical anchor to the ‘sentinel’ ports and islands overlooking the Indian Ocean, the Arabian Sea, the Red Sea, the Horn of Africa, and the Bab al-Mandab strait – all presently controlled by UAE.

The enhanced strategic significance of the UAE to Israel and the U.S. almost wholly derives from its having blatantly used the Yemen war as an opportunity to establish an oversized role for itself – through seizing the ‘guardianship’ of the strait connecting the Red Sea to the Gulf of Aden. Ibrahim Al-Amine has outlined in the pro-resistance Lebanese daily, Al-Akhbar (of which he is editor), “the [recent] American decision to force the UAE to reconsider its war “exit strategy”” in Yemen:

“The new development consisted of a major modification in the American-British decisions represented by a strategic decision to prevent the fall of Ma’rib. The Americans thus directly intervened in the battle. Anyone who looks back at the details … will realize that it is deeper and more dangerous in terms of the Israeli fingerprints … The nature of the intelligence work doesn’t resemble at all the work of the assaulting forces in the past years … In the present war situation, the battle needs men on the ground, hence the American decision to force the UAE to reconsider its war “exit strategy”…”.

Thus, the port of Aden, the Bab al-Mandab Strait and Socotra Island fall neatly into a vital component of the Cold War build-up between China and the U.S.: The Arab ally that can control this essential strait will give the U.S. leverage with which to jeopardize China’s Maritime Silk Road – hence, America’s support for the ongoing conflict in Yemen.

And hence the Houthi drone attack on UAE, signalling that the Houthis have no intention of conceding such a vital key point. The Houthis are giving the UAE a bitter choice: Strikes on its cities or yield up the strategic asset of Bab al-Mandab and its surrounds. Iran and China will be watching closely this ‘breakout’ initiative.

Recognizing that the policies spelled out in the 2022 NDAA represent a fundamental threat to China’s security and its desire for a greater international role, Congress also directed the President to come up with a ‘grand strategy’ on U.S.-China relations in the next nine months, and to prepare an inventory of the economic, diplomatic, and military capabilities the U.S. will require to blunt its rise.

Andrew Bacevich, the U.S. military historian, writes that among foreign policy mandarins in present-day Washington, “spheres of influence” have become anathema. As interpreted today, however, the very phrase smacks of appeasement: It carries for the Beltway foreign policy class, a whiff of selling-out the cause of freedom and democracy, a sin which senior U.S. officials abhor. This is all too evident in today’s heated U.S. mainstream discourse.

Of course! Isn’t it obvious? You can’t barricade a country inside its own territory to enjoy the latitude at a later date to be able to suffocate its economy in any future crisis, and at the same time, accept that Russia and China can set their own red lines – red lines that are formulated precisely to counter their containment, and to counter intimidation through military encirclement.

What the NDAA does, (perhaps inadvertently), is to underline precisely how the Russian and Chinese situation are inter-leafed reflections of each other’s predicament. The ‘war’ to break containment and encirclement is already underway.

Everyday in Everyway: US Gov’s Racist Propaganda War Against China

What the US Really Wants from Southeast Asia