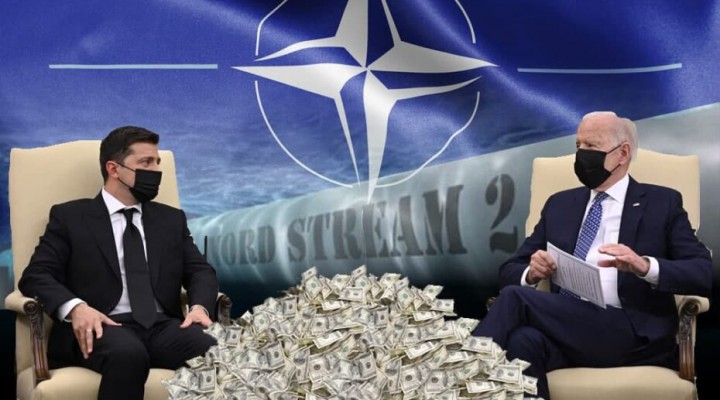 Are we past ‘peak frenzy’? Quite possibly, but it will subside only slowly. It is too good a diversion from other difficulties.

The sheer size and scope of the western information operations – insisting repeatedly on the imminence of a Russian invasion of Ukraine – has almost dwarfed the western effort mounted in the lead up to the second invasion of Iraq. This latest info-war has been qualitatively different from that earlier episode however, in the way in which supposed intelligence titbits were constantly fed to the press in order to stiffen the narrative spine with a direct sense of being at the very cusp of war.

By last weekend, the U.S. mainstream was indeed in a war frenzy, and it seemed that the narrative was gaining a momentum and energy of its own – moving beyond Washington’s control and picking up support from across the U.S. bi-partisan spectrum.

A sense of this was given by White House spokeswoman, Jen Psaki, referring to the Ukrainian borders as ‘sacred’ – evoking the 6 January language of viewing the transgression of protestors across the boundaries of the Capitol Building as being an assault on something ‘sacred’ to democracy.

By this week however, the lacunae inherent to the U.S. narrative were obvious: Biden, in his 7 December virtual summit with Putin, had threatened a ‘sanctions Armageddon’ for Russia. But those sanctions were not Biden’s to unilaterally wield (ultimately, they would have to be European sanctions).

And his team had had not got its sanctions ‘ducks’ properly lined up before the threat of catastrophically painful sanctions was uttered.

It has turned out – in the event – that the threatened sanctions would be far from apocalyptic. Europe vetoed any pre-emptive sanctioning of Russia. And the key pillars – Russia’s expulsion from SWIFT financial clearing system; Russian banks’ exclusion from exchanging roubles into Euros, and vice versa; and sanctions on Nordstream2 – were not acceptable to one or more European States.

In this Tuesday’s White House background briefing, the senior U.S. official quoted was still trying to make ‘bricks out of straw’m– suggesting that a ban on Russia selling sovereign debt on international markets would be highly damaging (when Russia sells its debt almost entirely on the domestic market). Overall, the official failed to convince.

Worse – from the Blinken perspective – the State Department and U.S. Treasury had been warning Blinken that the sanctions would hurt America’s European allies more than Russia, and that some mooted sanctions (such on Russian energy supplies), risked even triggering a global financial crisis.

In short, Team Biden was over-hyping the invasion meme, even before the threat of cripplingly painful sanctions by Europe was fully ‘in the bag’. This whole episode recalls 2014, when Washington was so convinced of the devasting impact of its 2014 sanctions ‘bag’ against Russia that Chancellor Merkel was persuaded by her intelligence services that the proposed sanctions were so devastating that Putin would have no choice, but to capitulate on Crimea; or be ousted (by those the West wrongly believe control Russia politically – the Oligarchs). In practice in 2014, the rouble was floated, and the Russian economy proved to be largely sanction-proof. It is the more so today.

Last Friday in Geneva was supposed to be the day on which Blinken was to face down FM Lavrov with a resolute, united western front, standing shoulder-to-shoulder with the U.S., and promising Moscow untold damage and consequences, were Russia to invade Ukraine.

In the event, the Geneva meeting was a short, non-event – as Blinken postponed in the hope that a EU foreign ministers’ meeting in Brussels the following Monday finally would give Washington the much longed-for show of resolute western unity.

Over the weekend came two further miscalculations (from the Anglo-axis): Firstly, the UK breathlessly launched its midnight ‘scoop’ that Putin was planning a coup in Kiev, only to have its purported conspirators ridiculed – more in Ukraine than elsewhere. (Maybe Russian intelligence had ‘spoofed’ the Brits?). And in parallel, the U.S. and Britain said they were beginning to evacuate personnel from their embassies in Kiev.

This latter statement seems to have been a step too far: It succeeded rather, in irritating the authorities in Kiev who called on Ukrainians to stay calm – and they went further, stating clearly that there was no evidence of a planned Russian invasion (contradicting Biden and Blinken). The Europeans too, poured cold water on the Anglo fear tactics, saying that they had seen the same intelligence reports as London and Washington, and that they perceived no immediate threat to Ukraine. Their embassy staff pointedly, would stay put.

This peak info-war over the last weekend not only failed in stiffening-up a show of European unity at the EU foreign ministers’ meeting on Monday – which Blinken attended, and which Biden rounded off with a video call with European leaders, in which he underscored their ‘shared desire’, rather, for a diplomatic resolution in Ukraine.

The Brussels meeting showcased western divergencies. Instead of unity, President Macron was proposing a new EU outreach to Moscow; Olaf Stolz was trailing his ‘fresh German start’ with Putin, and Mario Draghi was off to Moscow, also to meet with Putin.

All were looking to re-launch European relations with Russia. And finally, Macron (as EU President) is brokering his own solution to the Ukraine crisis in a Normandy format meeting, aimed at making progress (suspending certain draft laws in Kiev) to be the basis to nudge Kiev toward agreed negotiated autonomy for Donbass. (No doubt this initiative had been co-ordinated in advance with Putin).

The most salient aspect to Macron’s Minsk initiative however, is that the Americans are not invited.

If the Brussels meeting revealed something of substance, it was rather the fact of Ukrainian extreme financial distress. The state is on the brink of default, with its ability to borrow on the money markets at anything less than astronomic interest, said to be to be non-existent. The EU agreed to grant Ukraine a Euro 1.2 billion emergency loan. It seems too, that Ukrainian gas reserves ‘ran empty’ in November. Kiev hasn’t the cash to buy more, and the EU has been helping to keep ‘the lights on’ in Kiev, by reverse flowing EU gas up the Yamal pipeline to Ukraine. This EU initiative of course, draws down on the EU’ own dwindling strategic gas reserves.

Energy issues are clearly uppermost in the minds of EU leaders, at this moment. Energy prices already have spiked, and any severance of Russian natural gas supplies to Europe (which normally account for 40% of Europe’s total imports), would only fuel Europe’s already accelerating inflation. There is talk in Washington of setting up alternative supplies by diverting Liquified Natural Gas from Qatar or Asian suppliers, should the Ukraine crisis lead to a severing of EU supplies. But energy experts argue that the diversion of Asian supplies would likely contribute to an LNG bidding war that would drive up European energy costs even further.

So here we are: Seven weeks on from Biden’s 7 December ‘stern warning to Putin’, with no good U.S. options in view (but with U.S. public opinion now inflamed; and demanding a ‘tough’ response to these seemingly mythical invasion plans). There has been no invasion of Ukraine, and Moscow evinces little enthusiasm for such. It seems the intent in Moscow is to let Ukraine stew in its own juices for now. And to let the western info-war twist in the wind. Of course, unforeseen events can easily upset such sanguinity.

Are we past ‘peak frenzy’? Quite possibly, but it will subside only slowly. It is too good a diversion from other difficulties.

Bottom Line: For Putin, his argument of NATO overreach has found some traction amongst West European leaders (if not from Washington, who reportedly has conveyed a written response refusing Russia’s demands). Notably, however, the U.S. has achieved consensus in NATO in denying the key demands of Russia in respect to their security interests. This NATO response however, resolves nothing in respect to NATO’s relations with Russia.

Russia Moves Toward Checkmate on Ukraine

Inflection EP29: NATO Aggression Puts All of Europe at Risk

Update on the Ukrainian Front

0 thoughts on “Ukraine: Another Biden Débâcle?”