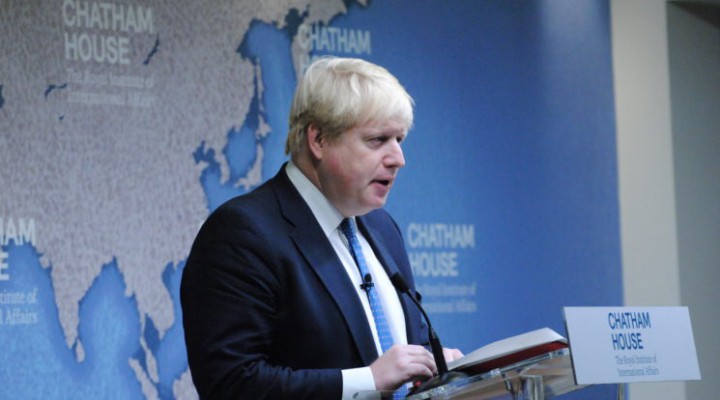 Johnson is resurrecting the notion of Britain bailing out of Europe and leaving behind hefty financial arrears. It’s a scurrilous attitude of, effectively, doing a runner on debt. Performed, of course, with a posh Etonian-Oxford accent.

British Prime Minister Boris Johnson is using leverage from a possible £39 ($48) billion debt default in order to force the European Union to accommodate his Brexit plans. In less polite terms, Britain is resorting to extortion to get its way, and in the sordid process is also threatening political peace in Ireland.

Over the weekend of the G7 summit in France, the British premier began dangling the possibility of reneging on an already negotiated divorce bill between Britain and the EU.

“If we come out without an agreement it is certainly true that the £39bn is no longer, strictly speaking, owed,” he said. “There will be very substantial sums available to our country to spend on our priorities. It’s not a threat. It’s a simple statement of reality.”

It is classic British rhetoric of making a lowdown maneuver sound like impeccable ethics.

Since taking over at 10 Downing Street on July 23, Johnson has repeatedly made it clear that he is demanding the removal of the Irish “backstop”. He has the brass neck to disparage it as “anti-democratic”. That putative arrangement negotiated by his predecessor Theresa May with Brussels would have seen an open border remaining between Northern Ireland (British jurisdiction) and the Republic of Ireland (an EU member) for a transition period of several years.

Johnson and his Brexiteer cabinet repudiate the backstop because, in their view, it undermines the sovereignty of the United Kingdom by having a porous border in Northern Ireland with an EU frontier state. (Why Britain even has an anti-democratic partition in Ireland in the first place is never permitted in discussions.) The reason why the backstop has been a hugely problematic issue is because the return of a hard border in Ireland could unravel two decades of a negotiated peace settlement that relied on maintaining an open, de facto non-existent border between the two Irish states. The British government is a signatory to the peace settlement known as the Good Friday Agreement signed with various Irish parties in 1997.

The EU and several European leaders, including Germany’s Angela Merkel and France’s Emmanuel Macron, have warned Johnson that there can be renegotiation of the May withdrawal deal and the provisions for an invisible border in Ireland. They have categorically said that there can be no return to a hard border, partly because of the economic damage that would inflict on an EU member state (Republic of Ireland), and also partly because of the danger of reigniting political conflict in Northern Ireland.

As part of the withdrawal deal negotiated by Britain under Theresa May with Brussels was the promise by London to pay a “divorce bill” of £39 billion. The money was calculated from what financial commitments was owed by Britain to the EU as part of its normal budgetary contributions to the bloc. Arguably, even if Britain were to crash out of the EU, it is still obligated to pay its past budget commitments.

Those legal payment obligations by Britain have always been a cause of resentment among Brexiteers like Johnson. He famously quipped when he was formerly UK foreign minister that Brussels “should go whistle” about its expectations of a British divorce bill. Meaning, they should expect nothing.

Now Johnson is resurrecting the notion of Britain bailing out of Europe and leaving behind hefty financial arrears. It’s a scurrilous attitude of, effectively, doing a runner on debt. Performed, of course, with a posh Etonian-Oxford accent.

On the way to the summit in Biarritz, Johnson asserted: “I have made it absolutely clear I don’t want a no-deal Brexit.”

Here he is being disingenuous. For Johnson and his cabinet of like-minded Rule Britannia ministers have been championing the no-deal Brexit option. They believe that Britain post-Brexit will somehow be reinvented as a new global free-trading power.

Disingenuously, Johnson then added: “But I say to our friends in the EU if they don’t want a no-deal Brexit then we have got to get rid of the [Irish] backstop from the treaty.”

This is putting a gun to heads.

What the British prime minister is setting up here is an extortion racket. He is demanding that the EU repudiate the agreement already negotiated with May and the provisions for an open border in Ireland – and if Brussels doesn’t cede to his demands then London will effectively default on its £39bn divorce debt.

Brussels has hit back with a warning that London must “honor its debts” if there are to be further talks about a future trade relationship with the bloc. The EU is Britain’s biggest trading partner with about half of all of its exports and imports deriving from European states.

One would think therefore that Britain is in no position to play hard ball with the EU given its future trading and economic needs. But what the unscrupulous Johnson seems to be doing is using the danger of political instability in Ireland as a form of blackmail on the EU.

If Brussels doesn’t give him what he wants, then London is pocketing the £39bn it owes to the EU, and also is prepared to risk a hard Brexit. A hard acrimonious, crash-out from the EU will inevitably mean the return to a hard border in Ireland from the setting up of customs controls. The EU will be obliged to protect the integrity of its single market by not allowing British goods to be transported freely into the EU via the Republic of Ireland. However, the acute dilemma for Brussels will be that it is liable to be accused of jeopardizing peace in Ireland by doing so. Johnson seems to be betting on the EU being intimidated by his recklessness.

Boris Johnson and his pretentious “upperclass civility” is the personification of treachery that Britain is notorious for down through the centuries. He’s grabbing the money, running, and letting others deal with the mess, particularly in Ireland.