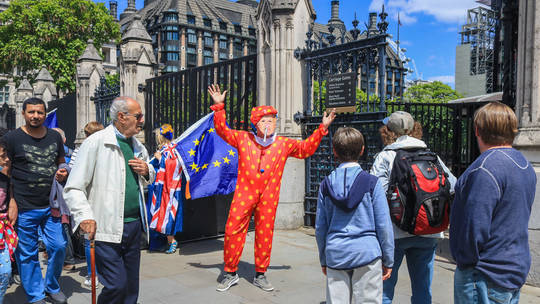 The accession to Downing Street by Boris Johnson could hardly come at a more precarious time as tensions mount between the US, Britain and Iran. Fears of a war breaking out are heightened by Johnson as prime minister.

Of concern is his very undiplomatic blabber-mouth and an incorrigible knack for dropping verbal clangers, rubbing people up the wrong way.

Johnson doesn’t seem to have any wit about when to cease offending people. His notorious public comments bordering on Islamophobia will have already earned him contempt in Iran. He will have very little authority or trust in Tehran if delicate negotiations are to ever succeed in de-escalating the acute stand-off in the Persian Gulf, in particular the tit-for-tat seizure of British and Iranian ships.

The British government and the Foreign Office are in disarray with several senior ministers already handing in their resignations this week in protest over Johnson’s replacement of Theresa May. One of those quitting was Alan Duncan who was in charge of UK relations with Washington and the European Union. The lack of senior advisers in the Foreign Office will, dreadfully, give Boris Johnson a freer license to be the bumbling, reckless figure he is. Handling a combustible geopolitical situation is not something to entrust him with.

What’s even more perplexing is that the 55-year-old new prime minister has already shown a fawning regard for US President Donald Trump. Johnson has several times debased himself as a lickspittle to the White House. When Trump slammed Kim Darroch, the then-British ambassador to the US, over a series of leaked cables criticizing the American administration, it was Johnson’s cowardly disowning of the diplomat which sealed his downfall and resignation earlier this month. Johnson’s reluctance to stand up for the seasoned ambassador was a cynical attempt to ingratiate himself with Trump.

The same deferential lackey attitude was seen again when Trump was widely condemned both by US and European politicians for using racist diatribes to attack four minority ethnic congresswomen. In a British televised debate, Johnson said Trump’s rhetoric was “inappropriate,” but he pointedly refused to condemn the president’s incendiary language as racist.

True to his mercurial character, Johnson is on record from four years ago for disparaging Trump as “out of his mind” over the latter’s proposed ban on people from seven majority-Muslim countries entering the US. Since then, however, Johnson has gone out of his way to ingratiate himself with Trump.

Trump has returned the compliments, endorsing Johnson as a “great leader” even before this week’s election by the Conservative Party. Trump is an ardent supporter of Johnson’s plan for a ‘hard Brexit’ departure from the European Union this autumn. It was Johnson after all who – along with arch eurosceptic Nigel Farage – pushed the whole Brexit issue to the referendum result in 2016. As an abrasive hard Brexiteer who has openly disdained soft diplomacy with Brussels, Prime Minister Johnson will likely crash the United Kingdom out of the EU without any follow-on trade pact with the bloc.

Like other hard Brexiteers, Johnson suffers from delusions of “Great Britain” and its renaissance as a global free-trading power as in the halcyon days of empire more than a century ago. It is this chauvinistic delusional arrogance that drives Johnson to bend over backwards to pander to Trump because he knows that without the EU umbrella, Britain will need to cut a trade pact with the US as a lifeline.

That’s why the mounting tensions with Iran are particularly dangerous. Johnson is liable to do Trump’s bidding over Iran even more earnestly than the usual British “special relationship” of obliging Washington’s imperialist warmongering. Britain has already demonstrated a willingness in recent weeks to escalate Washington’s maximum pressure on Iran, which has led to further tensions and risks of a military confrontation. With Johnson at the helm in Downing Street, the prospect of him reciprocating Trump’s reckless conduct in the Persian Gulf is very real and alarming.

The caricature of Britain being a lapdog to US global power projection is set to become even more accurate under Johnson’s premiership.

Even if he doesn’t blunder Britain into another war as an American accomplice, the international image of the United Kingdom will be further tarnished. Johnson’s conceited disregard for European allies promises to cast Britain adrift as a small has-been nation buffeted by global economic forces beyond its control.

During the Tory party contest for new prime ministership, Johnson castigated the European Union and Germany in particular for “soft peddling” towards Russia.

He reiterated the unsubstantiated claims that Russian state agents had carried out an assassination plot against former spy Sergei Skripal and his daughter in Salisbury back in March 2018. And he inveighed against Europe for not taking a more aggressive line towards Moscow in support of Britain.

Recall that it was Johnson who, as foreign secretary, launched the wildly speculative accusations against Russia. He even, crassly, laid the blame for the alleged plot on Russian President Vladimir Putin. Such slander not only betrays outrageous breach of international norms but a deep-seated mental defect of Russophobia. Johnson was later found out to have told lies about his alleged information implicating Russia.

Barmy Boris even declared during his bid for premiership this month that Britain was “at the forefront of Putin’s aggression” against Western states.

is imbecilic understanding of history – despite his pretensions of being an expert scholar – were illustrated previously when he compared Russia’s hosting of the 2018 World Cup to Nazi Germany staging the 1936 Olympic Games. The absurd comparison was beneath contempt. Russia’s Foreign Ministry rebuked his “venomous hatred” at that time and stated: “It’s scary to remember that this person represents the political leadership of a nuclear power.”

Scary indeed. He is now the British leader.

Johnson has further disgraced himself by claiming that Russia’s “annexation” of Crimea was comparable to Nazi Germany’s invasion of the Czech Sudetenland in 1938. He admonished that failure by the US and the rest of Europe to take punitive action against Russia was tantamount to the appeasement policy towards Hitler during the 1930s leading up to World War II. “It is wholly apposite” to equate the Third Reich with Putin’s “Russian regime.”

Having a lickspittle and ignorant buffoon with an inflated sense of superiority as Britain’s prime minister is a dangerous development for exacerbating already volatile international tensions, not just with regard to Iran, but also between the US, Europe and Russia.

Boris Johnson is an unrestrained clown-figure whose access to levers of power will end in tears. We can only hope that those tears will be his and not the rest of the world.