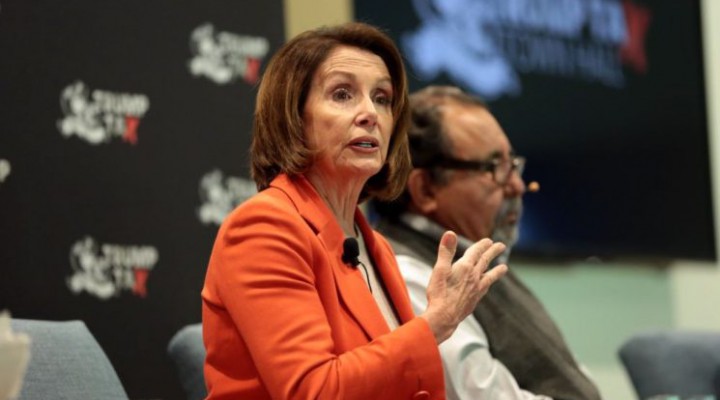 The cozy relationship between the Trump administration and Boris Johnson was doused with cold water last week by Nancy Pelosi who warned that Congress would not pass any proposed US-UK trade deal if Britain proceeded with its no-deal Brexit.

The ever-cozy relationship between the Trump administration and Britain’s new Prime Minister Boris Johnson was doused with cold water last week by House Democrat leader Nancy Pelosi. She warned that Congress would not pass any proposed US-UK trade deal if Britain proceeded with its no-deal Brexit from Europe.

That’s because in the “hard Brexit” scenario being pushed by Johnson and his Brexiteer cabinet the result would inevitably mean the return of a physical border between Northern Ireland (British jurisdiction) and the Republic of Ireland (a member of the European Union). The return of a hard border dividing Ireland would violate the Good Friday Agreement signed by British and Irish parties in 1997 which brought an end to decades of armed conflict.

“Whatever form it takes, Brexit cannot be allowed to imperil the Good Friday Agreement, including the seamless border between the Irish Republic and Northern Ireland,” said Pelosi. She has made similar categorical warnings on this issue before.

The likes of Johnson and his hardline Conservatives have always viewed Brexit as an Anglo-centric issue of Britain “escaping from the EU”, without any regard for how such a departure would impact Ireland.

There is mounting concern across Ireland that the hard Brexit desired by the British government could undermine the last two decades of relative peace on the island.

At least to her credit, former British premier Theresa May was mindful of the danger to Irish peace if there was no special arrangement for an open border in Ireland regardless of Brexit. That was known as the “backstop” arrangement.

The return of a hard border in Ireland would inflame nationalist sentiment. Not only would such a structure cause immense economic hardship, it would also undermine a vitally important all-Ireland dimension that the Good Friday Agreement established. For Johnson and his ilk to ride roughshod over Irish concerns, it would mark a stark violation of the British government’s own obligations to an international treaty. In short, it would be politically explosive for Ireland.

Since Johnson took over 10 Downing Street on July 23, he has voiced typical disregard for the Irish problem. He even referred to the backstop idea as “anti-democratic” – because it limits London’s freedom to use hardball tactics with the EU. Johnson and his Anglo-centric Brexiteers share a notion that Britain can simply walk away from the EU after more than four decades of membership and then proceed to become a great free-trading nation as in the days of the British Empire.

Enter Donald Trump. The Trump administration – which has brazen contempt for the EU – has been egging on the Johnson government to go for its hard-Brexit objective. President Trump and Boris Johnson have reportedly been in frequent phone contact over the past three weeks, and there has been a flurry of transatlantic meetings between senior British ministers and Trump administration officials.

Last week, Trump’s national security advisor John Bolton was hosted by Johnson in 10 Downing Street. Bolton announced with much fanfare that the US would put “Britain at the front of the queue” in negotiating future trade pacts. It was an explicit incentive from the Trump administration to Johnson and his government to crash out of the EU with no transition arrangement (the so-called “soft Brexit” option).

The dangling of a future bilateral trade deal with the US, reinforces the high-handed attitude of the present British government to tell Europe to “go whistle”, as Johnson once arrogantly said.

It’s not clear if Johnson can get away with his no-deal abrupt departure. There are moves within the British parliament to prevent such a rupture by precipitating a general election before the divorce deadline given by Downing Street on October 31.

Nonetheless, the Trump administration is certainly pulling out the stops to embolden Johnson and his Brexiteers. In the latter’s calculation, if a lucrative trade pact were afforded by Washington then Britain can salvage its economic losses after cleaving from Europe. Nearly 50 per cent of British imports and exports are traded with the EU. Replacing that with a US market would thus be absolutely vital for British economic survival post-Brexit.

A future trade deal between the US and Britain is not for the Trump administration to appoint. For a start, realistically, negotiations would take several years to work out, by which time Trump may not even be in the White House. Secondly, any proposed trade agreement would have to be passed by Congress, the legislative branch of US government.

As Pelosi warned last week, Congress will not pass any US-UK trade deal if the Brexit process being pursued by the British government results in a hard border returning to Ireland.

The confidence of Pelosi’s assertion stems from the traditionally strong Irish-American caucus in Congress. The Irish may lack the financial clout of the Israeli lobby, the military-industrial complex lobby or the Saudi-Big Oil lobby, but what it does have is votes. A lot of them. With an Irish-American diaspora amounting to nearly 10 per cent of the US population, that’s a lot of votes, enough to sway Congressional consensus.

Pelosi is of Italian-American heritage, but the shrewd political veteran knows that the Irish-America constituency can be decisive for elections.

In addition, to be fair, the US Congress invested a lot of political capital over many years to implement the British-Irish peace process which culminated in the Good Friday Agreement in 1997. The Congress is not going to let the Agreement be trampled on as the Johnson government and the Trump administration appear prepared to do. (Trump’s position may be due simply to utter ignorance about Irish politics.)

Thus, bumbling Boris Johnson and his bumptious Brexiteers could find themselves between a rock and a hard place. By cutting off any goodwill with Europe in their contemptuous arrogance, Britain ends up with no EU concessions for future trade. Then, the British find out that their fantasy of cutting a bonanza trade deal with Trump ends up in the Congressional trash can.

Johnson may think he can screw over the Irish in Ireland (population 6 million). He hasn’t reckoned on 33 million Irish-Americans.