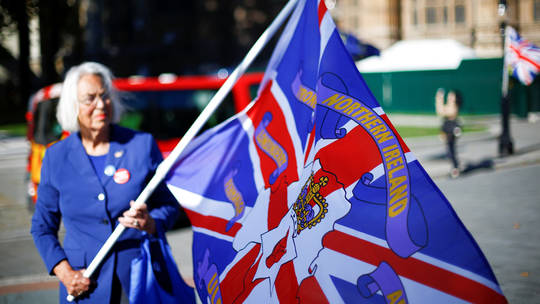 Britain’s Boris Johnson is going for it, a no-deal exit from the European Union. His cabinet of “hard Brexiteers” are turbo-charged for an abrupt departure; the consequences could be tumultuous for Ireland.

On his first day as British prime minister last week, Johnson was candid in his disdain for attempts to minimize disruption in Ireland over Brexit. He slammedthe proposed “backstop” arrangement of maintaining an open border between Northern Ireland and the Republic as “anti-democratic” and vowed to scrap it.

A hard-Brexit scenario which Johnson and his cabinet are pushing for will mean Britain leaving the EU’s single market and customs union without any transition deal. That will inevitably see the return of a hard border for trade and customs control between the Republic of Ireland (an EU member) and Northern Ireland under British jurisdiction.

Given the preponderance of daily trade and traffic between the north and south of Ireland, any such border control will cause immense damage to both economies.

But it’s not just about economics and damage to people’s livelihoods. The London government’s gung-ho stance on delivering Brexit is endangering the Irish peace process and devolved administration.

The Good Friday Agreement, signed in 1998, mandates the British and Irish governments to support a power-sharing deal between pro-British unionist parties and pro-independence nationalists in Northern Ireland. That agreement is dependent on maintaining an open border between the two jurisdictions on the island. That is a crucial element for nationalists because it recognizes their rights for a united Ireland.

Irish politicians, north and south, as well as European leaders have warned Johnson that ditching the backstop guarantee of an open border is unacceptable.

However, the British prime minister’s hard-ball approach indicates he doesn’t give a fig. Johnson has reportedly declined to even make a customary phone call to Taoiseach (Irish Prime Minister) Leo Varadkar to discuss his Brexit plans. There appears to be no attempt by the new occupant in Downing Street to meet with European counterparts.

Johnson may say he doesn’t want a physical border in Ireland. But the reality of a hard exit from the EU will demand that controls have to be established in order to protect the integrity of the EU’s single market and customs union. Johnson seems to be daring the EU. But in doing so, he shows a reprehensible disregard for the impact such a game of dare will have in Ireland.

The Good Friday Agreement brought an end to decades of conflict in Northern Ireland in which thousands were killed and almost every family was scarred by violence. The Irish Republican Army (IRA), which had brought its bombing campaign to London with devastating effect, became dormant due to the landmark peace deal.

Nevertheless, the devolved power-sharing administration in Northern Ireland has always been an uneasy arrangement. Unionist parties have tended to stymie full implementation of the accord much to the annoyance of nationalist parties. The latter accuse successive British governments of not advocating more strongly for the Good Friday Agreement by urging the unionist parties to uphold their side of the bargain.

The fact that the main unionist faction in Northern Ireland – the hardline Democratic Unionist Party (DUP) – is a crucial partner for the Conservative Party’s parliamentary majority in London is an obvious reason why the British government has limply allowed the DUP to hold the Northern Ireland Assembly in suspension. The Assembly broke down more than two years ago over a financial scandal and has dragged on in a state of limbo. That vacuum in local administration has gravely undermined the Good Friday Agreement and people’s faith in the peace process.

Moreover, the hardline Northern Ireland unionists are also happy with Johnson’s high-handed approach to Brexit. They don’t want a backstop arrangement because, in their view, that undermines Northern Ireland’s jurisdiction under British rule.

So, in the parliamentary pact between Johnson’s Conservative government and the DUP there is something of a devil’s bargain that relishes the scenario of a no-deal Brexit and the accompanying erection of a hard border between Northern Ireland and its southern neighbor.

Britain’s new foreign secretary, Dominic Raab, who is a Johnson acolyte for a hard Brexit, has announced plans to introduce “direct rule” from London over Northern Ireland in the event of a no-deal exit from Europe on October 31.

The return of direct rule from London is an incendiary development for Irish nationalists. The decades of violence and years of hard-fought political negotiations to create the Good Friday Agreement were aimed at achieving a measure of Irish autonomy from London. For many Irish nationalists the Agreement was seen as a compromise on a longer political path towards full Irish independence and reunification.

Irish history shows that violent conflict is always a recurring reaction to British meddling and presence. Periods of relative peace are often followed by a resurgence in armed struggle against British rule. The reckless way London is now jeopardizing the peace settlement is a classic example of how ignorant English politicians are stoking unrest. Small groups of dissident Irish republicans who split off from the IRA will now have a renewed recruitment impetus, by claiming the Good Friday Agreement was a “sell-out” to the cause of Irish freedom.

Johnson in his anglo-centric pursuit of “freedom” from Europe is putting jingoistic English nationalism over the needs and concerns of Ireland. He is pandering to hardline unionists in Northern Ireland, but they represent a minority view on the whole island. There are plenty of reasons to believe that more liberal unionists in Northern Ireland are opposed to Johnson’s hard Brexit. When the UK held the Brexit referendum in June 2016, the majority of Northern Ireland’s electorate voted to remain in the EU, as did the people of Scotland.

Still, here may arise the real surprise outcome. Hopefully, violent conflict in Ireland is avoided by the stoicism of its people. But what may transpire, prompted by the British government’s reckless disdain, is the holding of a referendum for a reunited Ireland. A clear call for Irish independence is looking increasingly likely, delivered by a majority in Northern Ireland, including voters who previously would have considered themselves pro-British, but who have come to the conclusion that toffs like Johnson don’t give a toss about their lives.

The amusing paradox is that Johnson and his arrogant Brexiteers claim they want to make the United Kingdom ever stronger. By pushing their dreams of reviving British “greatness” they are rupturing London’s shaky union with Scotland and Northern Ireland. The latter is particularly at risk from an unravelling peace process. But it may also give rise to the end of British rule in Ireland, peacefully.

0 thoughts on “Boris Johnson rattles Irish peace, but his arrogance may backfire with Irish reunification”