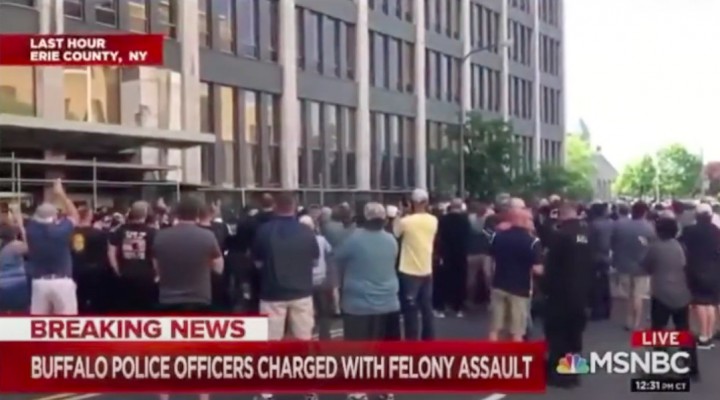 Among the constant deluge of police brutality footage flooding the internet as America’s armed goon patrol responds to the Black Lives Matter protests across the nation, there is one video which stands out above all the others in illustrating just how pervasively violent police culture is. Curiously enough, this video itself contains no police brutality.

The video clip in question shows the outside of the Buffalo City Courthouse, where members of the police and fire unions awaited the two officers who hospitalized a 75 year-old peace activist named Martin Gugino by shoving him to the ground. When the two officers exited the courthouse, released on their own recognizance, and were met with applause from the crowd.

“Two police officers were charged with felony assault during a protest in Buffalo, and they were applauded by their colleagues as they left the courthouse,” MSNBC reports as its footage shows a large gathering clapping and whistling enthusiastically.

Buffalo police officers applauded by their colleagues as they leave the courthouse pic.twitter.com/t9DGC07ijZ

This, right here, is a sign of a culture that cannot be redeemed. A police culture which makes no secret of the fact that cops as a collective will consistently support the most self-evidently unjustifiable acts of brutality committed by their own.

This video emerges after 57 Buffalo police resigned from their department’s Emergency Response Team in protest of the suspension of the two officers who’d been recorded assaulting an old man without the slightest provocation. It emerges after the Buffalo Police Department was caught lying that Gugino had “tripped and fell” before footage surfaced showing Gugino being shoved hard and smashing his skull on the pavement. This police department could not possibly have made it more clear to the public that they unconditionally support one another in their viciousness and savagery.

This is far more damning than any of the many, many video clips circulating that demonstrate irrefutably how police and their apologists have already lost the debate on this matter. It makes a lie of the widespread narrative that this is just a minor problem caused by a few bad apples while the “vast majority” (to quote the 44th president) are good people who uphold their duty to protect and serve the community.

This isn’t working. Police culture cannot be saved, and has no interest in being saved. In the eyes of the armed goon patrol, it’s the people complaining about police brutality who are the problem. That’s why the response to them has been consistent and copious amounts of police brutality.

The problem, as we’ve discussed previously, is that those in power have no intention of ever departing with the violent goon patrol which gives them the ability to brutalize the public if they get out of line. Many of them are providing lip service to solidarity and listening and understanding right now, but make no mistake: the mainstream rank-and-file public awakening to the reality that they live in a militarized authoritarian police state was not in the script, and they are getting very nervous about its implications.

It will be interesting to see how this plays out, to say the least.