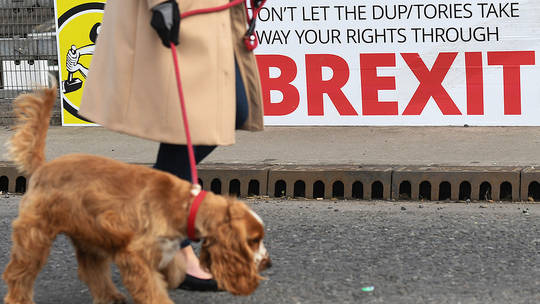 The political implosion that is Brexit is a legacy of recent and past British lies and imperial malfeasance. Boris Johnson casting blame on Ireland and the EU for his country’s woes is just more guff from Perfidious Albion.

His call for the suspension of Britain’s parliament – only weeks before the EU departure deadline on October 31 – is being rebuked by opposition parties as another “anti-democratic” measure to force through a no-deal Brexit.Johnson is effectively sidelining lawmakers from having a say on the manner of Britain’s exit from the EU, in particular on preventing a so-called “hard Brexit.” That scenario is opposed by a majority of parliamentarians, including many in Johnson’s own party, because of the feared economic turmoil from a sharp rupture from the EU which would inevitably see overnight border and customs controls being erected.

The so-called United Kingdom is riven with bitter disagreement over Brexit. Close to half the electorate voted against leaving the EU in the referendum in 2016. A majority in Scotland and Northern Ireland were in favor of remaining. Within the leave camp, there are divisions over a hard Brexit or a soft option – the latter involving a transition period for leaving the EU with temporary adherence to European regulations.

But let’s not forget, this debilitating debacle of Brexit is a made-in-Britain problem.

Who called for Brexit in the first place? It was Johnson’s Conservative Party under David Cameron’s leadership that pledged holding an “in-out” referendum as part of its election manifesto. That move was motivated by internal Tory party squabbles with hardline Euroskeptics and a bid to calm the ranks with a referendum. It was also motivated by Cameron trying to stymie the newly formed UK Independence Party (UKIP) led by Nigel Farage which was stealing Conservative voters with its hardline anti-EU platform.

Cameron probably didn’t bet on the Brexit referendum result. The whole exercise was a political maneuver to buy off Tory party assaults from within and from UKIP. The referendum was carried, largely down to claims of huge economic savings if Britain were to leave the EU and its budget obligations. Those claims, such as post-Brexit Britain having billions of pounds to invest in the National Health Service, have since turned out to be empty, told to the electorate by the likes of Boris Johnson, Michael Gove and other hardline Brexiteers who are now in control of government.

They are some of the recent deceptions by the British political class that have landed Britain in its current mess.

But perhaps the beauty atop the cornucopia of calumny is Johnson’s insistence that the backstop arrangement for Ireland is an “anti-democratic” hindrance to Britain’s “right” to quit the EU. He claims that the backstop limits British sovereignty because it would tie Britain indefinitely into a customs union with the bloc.

The infamous backstop is an insurance policy to avoid the return of a hard border on the island between Northern Ireland (British jurisdiction) and the Republic of Ireland (an EU member). Avoiding such a physical demarcation is crucial to the two-decade-old peace settlement brought about by the 1998 Good Friday Agreement, which ended a bloody conflict that had engulfed Northern Ireland for nearly 30 years (1969-1998).

Johnson’s predecessor Theresa May had negotiated a backstop as part of her Withdrawal Agreement with Brussels after nearly two years of political wrangling. That agreement failed to get passed in British Parliament three times, not just because of the Irish backstop but more generally because of many other bitter divisions over the entire Brexit process.

Since Johnson took over 10 Downing Street on July 23 – elected by the Tory party constituting less than 1.0 per cent of the British population – he has shifted the goalposts dramatically by demanding that the special arrangement intended for Ireland be scrapped.

Johnson and his Brexiteer cabinet are peeved that their room for maneuver with Brussels is curtailed by the British government’s obligation as a signatory to the Good Friday Agreement and its responsibility toward maintaining political peace in Northern Ireland.

Bumptious Boris has unconvincingly vowed to support the Good Friday Agreement and to prevent the return of a hard border in Ireland. But he has not provided any realistic alternative plan for avoiding customs controls if he crashes out of the EU on October 31 as his cabinet are aiming to do.

If a hard border is once again erected in Ireland between north and south then there is a grave danger of recent simmering political violence boiling over. Such a visible partition on the island would be anathema to many nationalists as a collapse of the Good Friday Agreement.

Here is where the lies and past crimes of Perfidious Albion boomerang like a smack in the face. Johnson and his jingoistic empire revivalists have a problem over the Irish question for one simple reason: Britain’s historic violation of Ireland’s sovereignty and democratic rights.

The whole problem of an Irish border and infernal backstop conundrum is due to Britain’s partition of the island in the first place – an unpardonable crime against Ireland’s ancient claims of nationhood.

This year marks the 100th anniversary of the War of Independence (1919-21), which Britain halted by its partial concession of what became known as the Republic of Ireland. London forced the north-eastern corner of Ireland to retain British jurisdiction. The splitting of the country was an act of butchery against the Irish majority who wanted full independence. Britain justified its act of gerrymandering a border because it had in previous centuries populated the northern areas with pro-British settlers.

The War of Independence in Ireland was largely instigated because London refused to recognize the democratic mandate for independence. A national election in December 1918 resulted in over 70 percent of those elected standing on a platform for independence from Britain, as documented by Maurice Walsh in ‘Bitter Freedom’.

The British government chose to ignore the result. A young Winston Churchill who was a senior government minister blamed Irish rebels for standing in the way of Britain’s “global dominance.” Churchill was among those who ordered the deployment of World War I battle-hardened mercenaries to ruthlessly quell the Irish independence movement. Those troops, infamously named the Black and Tans, imposed a reign of terror, from burning villages to indiscriminate shootings of civilians.

It is somewhat poetic justice that the Irish problem has come back to bedevil British politics to the point where the debacle is threatening to tear the much-vaunted United Kingdom asunder.The whole Brexit fiasco is an entirely British-made imbroglio. It is a result of petty rivalry within the British political class, especially the rightwing Little Englanders of the Tory party. And it is a result of the historic violation of democratic rights in Ireland.For Johnson to blame Ireland and the EU for impeding British sovereignty is rich beyond words. The chicanery of Britain’s ruling class is only matched by its audacious pretensions of “democracy.”