Biden Hasn’t Got a Prayer 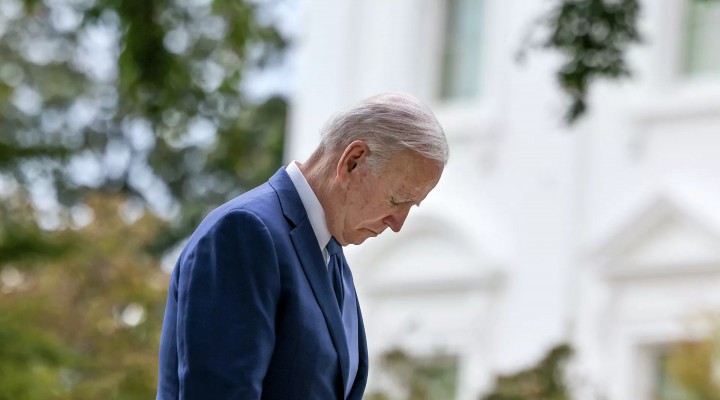 US President Joe Biden is escaping to Europe this weekend leaving behind a domestic scene of political disorder and despair.

In a corny bit of reporting, the AP news agency opined that Biden would begin his European tour by seeking the “power of prayer” by visiting the Vatican to meet with Pope Francis.

The “deeply religious” president would find inspiration, it was suggested, before heading off to the G20 and COP26 summits where he would tout US leadership for confronting “climate change” and the alleged growing “authoritarianism” of China and Russia.

It’s doubtful the pontiff would indulge this prayer format portraying the US leader as a “Holy Joe” benign world figure – even if Biden is the only second American president out of 46 total in the history of the Republic believed to be Catholic (the other being John F Kennedy).

Corniness aside, President Biden has a chock-full list of concerns for which he may wish to supplicate divine intervention.

In no particular order, there are his sagging poll numbers among US citizens, including Democrats. That growing discontent is due in part to the pessimism over a pandemic that just won’t go away and whose death toll is heading towards one million Americans before the end of the year.

On top of that grimness, there’s frustration with the lack of delivery on Biden’s electoral promises to improve social conditions for ordinary citizens. His plans to launch ambitious investment programs in public services and infrastructure have been stuck in Congressional gridlock for nearly 10 months since he entered the White House. Biden may well pray that a couple of corporate-bought senators will pass his big spending plans before the entire place collapses.

The seething voter disillusionment is only fueling the quackery of Donald Trump and the cult-like Republicans who offer no solution at all except a drift towards more chaos and misery. At this stage in his presidency, Trump’s poll numbers were even lower than Biden’s. And that was before Trump’s tax giveaways to the super-wealthy and his catastrophic pandemic mismanagement.

On foreign policy matters, President Biden will be praying that reports of a new Chinese hypersonic weapon turn out to be inaccurate. His top military chief General Mark Milley this week described the alleged new hypersonic missile to be “very close” to a “Sputnik moment” owing to its purported ability to evade US defense systems. China maintains that the reported test projectile was not a weapon but rather a spacecraft prototype. Biden will be praying the Chinese are telling the truth otherwise his coat-trailing and bravado defense commitments regarding Taiwan may turn out to be most unwise.

A few other quick prayers may bubble up in Joe’s mind. Please make Turkey’s President Erdogan have second thoughts about buying Russia’s S-400 air defense system. For Erdogan to insist on going ahead with that purchase is just too embarrassing for NATO propaganda that tries to present Russia as a security threat to Europe. Also, the “awkward move” by the Turkish leader is jeopardizing multi-billion-dollar sales of the US-made F-35 fighter jet (also known as the “flying brick”).

Then there is divine intervention required to make France’s President Macron get over his sulk about the United States’ betrayal with Britain and Australia in forming the AUKUS military pact which cost Paris a €50 billion submarine contract. That little bit of treachery by the Biden administration has boomeranged big time by severely denting confidence in US leadership among European vassals, er, allies.

Despite all the absurd pretensions of American virtue, if Pope Francis had integrity and courage he might like to skip the prayer session and tell Biden some home truths.

For starters, stop the criminal persecution of Julian Assange for his brave exposure of American war crimes. The principled publisher is being judicially murdered by Washington’s vindictiveness. All for the “crime” of Assange exposing Washington’s illegal wars around the world.

Here’s another “prayer” that Biden should hear. End all US criminal sanctions that are killing people in Cuba, Iran, North Korea and other countries from being deprived of basic humanitarian needs.

And stop the criminal American policy of relentless aggression towards China and Russia based on lies and smears that are inciting international tensions to the infernal threshold of possibly instigating nuclear war.

The only “divine intervention” that the world needs is to stop the systematic criminal insanity of the US ruling class and its evil capitalist depredations. As it is, Biden hasn’t got a prayer.

The Biden Regime Has a Penchant for Nazi-style Behavior

0 thoughts on “Biden Hasn’t Got a Prayer”