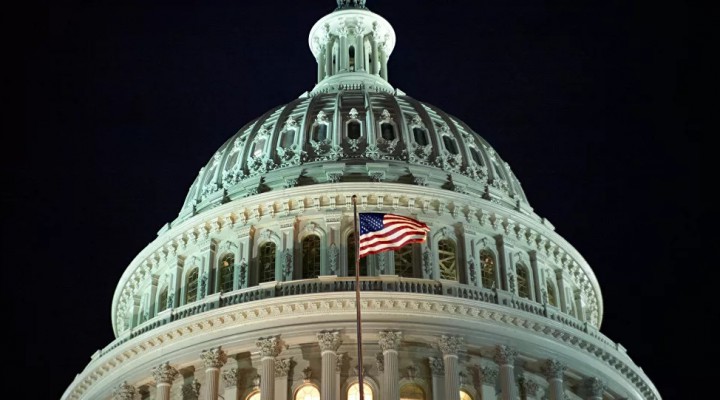 The US Congress is pushing through another record-breaking military budget this week while tens of millions of Americans are staring into the abyss of Christmas misery from poverty and disease. The twisted priorities of Washington’s politicians show the American political system is sick beyond words.

With hardly a hitch, the Democrat-controlled House voted for a $740-billion military spend for the following year. The Senate is also expected to follow suit and pass the bill in short order. President Trump is griping about it, not because of the increased fiscal largesse, but because the bill contains an add-on measure to rename military bases named after Civil War Confederate generals. Talk about absurd political correctness!

Meanwhile over half the nation’s population of 330 million are haunted by deprivation exacerbated by the coronavirus pandemic. Tens of millions have lost their jobs, and as many more again are facing eviction from their houses due to unpaid debts.

Hospitals in every state are struggling to cope with the surge in people sickened by the Covid-19 virus as the death toll in the US heads towards 300,000 since the pandemic erupted nearly nine months ago. The US has by far the biggest number of deaths from the disease in the world, yet its citizens are abandoned without adequate social welfare and medical care.

Americans are crying out for urgent economic assistance to cope with unemployment and to put food on the table for their families, and yet their Congress is still wrangling and delaying over passing a pandemic relief bill because “it would cost too much”.

One easy fix would be if the US military budget was re-directed to meet social needs and the burgeoning plight of its citizens struggling with poverty and disease.

Another source of relief and possible social reconstruction would be if a reasonable, progressive tax was levied on the inordinate elite wealth in a nation where a handful of billionaires possess as much capital as half of the population.

“Never before has America seen such an accumulation of wealth in so few hands,” said Frank Clemente, executive director of Americans for Tax Fairness.

He poignantly added: “As tens of millions of Americans suffer from the health and economic ravages of this pandemic, a few hundred billionaires add to their massive fortunes. Their pandemic profits are so immense that America’s billionaires could pay for a major Covid relief bill and still not lose a dime of their pre-virus riches.”

It should therefore be no surprise that the US is collapsing from the pandemic. That society is in death throes because of its endemic pathological political economy which the pandemic is but ruthlessly exposing.

The American political class is bought and paid for by billionaires who want endless wars to feed the military-industrial complex and endless tax privileges to feed their insatiable and irrational wealth accumulation. The political system is divorced from the needs of the vast majority who are left to die in poverty, disease and deprivation.

America is the antithesis of “democracy” despite all the brainwashing to the contrary declaring virtuous “exceptionalism” and “greatness”. It is a putrid plutocracy, run by and for the obscenely wealthy and their political flunkies in Washington, many of whom are plutocrats themselves.

Donald Trump didn’t change the system, and neither will Joe Biden. They aren’t even capable of conceiving of the necessary changes needed. The task is way beyond a mere change in personnel in the White House or in the Congress. What needs to change is the entire system which is organized to function as a plutocratic wealth and war-generating machine. That will require mass action by organized political consciousness. The ultimate priority is delivering for social need over private profit, requiring the breaking of capitalism and its chains on human potential.

Republicans and Democrats, including millionaires like self-declared “socialist” Bernie Sanders and other so-called progressives, are part of the problem, not the solution.

The supposed right-left divide in US politics is a mirage. An absurd illusion. Both parties are two faces of the same gold doubloon that always ends up in the bottomless pockets of the rich – the bankers, corporations and war-racketeers.

When any entity is so absolutely corrupt it inevitably becomes outwardly moribund. The misery of American people is reflected in the death and suffering of so many others around the world from the US wars, from Afghanistan to Yemen and beyond. Sick priorities produce more sickness and death. The evidence is staring us in the face.

Biden Picks Raytheon Board Member To Lead The US War Machine

Burning issue: If US veterans poisoned by military toxins deserve compensation then so do millions of innocent foreign victims

One thought on “America’s Sick Priorities”