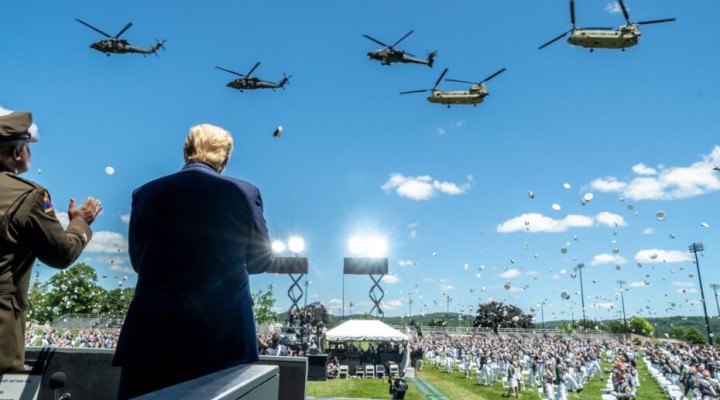 The world has seen the blood-soaked results of paramilitaries and civilian vigilantes teaming up with military dictators to enforce fascist rule. Trump and his supporters are encouraging a similar alliance in the U.S.

History books record that there were a mere handful of cases in which generals plotted the overthrow of a far-right regime to institute moderate or leftist government. In the vast majority of cases, however, generals’ putsches are fascist affairs having dire consequences for the rule of law and human rights. Retired U.S. Army Lieutenant General Michael Flynn, the former director of the Defense Intelligence Agency and Donald Trump national security adviser, circulated an on-line petition calling for Trump to suspend the U.S. Constitution, declare martial law, and have the Pentagon oversee a “re-vote” of the presidential election, one that would assuredly have Trump “win” over the current President-elect, former Vice President Joe Biden.

The Flynn petition also warned of a “civil war” if his demands were not carried out. The petition stated: “Failure to [suspend the Constitution, declare martial law, and conduct a re-vote] could result in massive violence and destruction on a level not seen since the Civil War.” The petition adds, “Limited Martial Law is clearly a better option than Civil War!” Flynn was recently pardoned by Trump for his criminal conviction of lying to federal investigators.

Flynn’s dangerous anti-constitutional rhetoric has not been seen in the United States since the Civil War. To be sure, there have been right-wing generals who defied various post-Civil War administrations in the past – Army General Douglas MacArthur, Army Major General Edwin Walker, Air Force General Curtis LeMay, and Army Major General John Singlaub are four of the most notorious in that respect – none have come close to Flynn in advancing insubordination to outright insurrection and sedition.

MacArthur had his showdown with President Harry S Truman during the Korean War and Truman fired him. Walker violated the Hatch Act by persuading troops in his command to vote against Democrats and distributing material published by the far-right John Birch Society to his troops. President John F. Kennedy sought and received Walker’s resignation of his officer’s commission in 1961. Walker came the closest to committing outright insurrection when he participated in white segregationist violent upheaval at the University of Mississippi over the admission of a black student in 1962. Walker was arrested by U.S. Marshals in Oxford, Mississippi and charged with four federal criminal counts, including inciting insurrection against the United States and conspiracy to overthrow the laws of the United States. The charges were later dropped. Walker’s political career ultimately ended after his arrest on two occasions, in 1976 and 1977, for “lewdness” in public men’s toilets in his hometown of Dallas, Texas.

Strategic Air Command chief LeMay clashed with President Kennedy over LeMay’s insistence that the United States launch a nuclear bombing campaign against Cuba during the 1962 Cuban Missile Crisis. President Lyndon Johnson forced LeMay to retire in 1965. LeMay served as vice presidential running mate on the extreme right-wing American Independent Party presidential ticket of candidate George Wallace in 1968. The ticket, which was endorsed by General Walker, received 46 electoral votes. Singlaub, the chief of staff for U.S. Forces in Korea, publicly argued with President Jimmy Carter in 1977 over U.S. troop withdrawals from the Korean Peninsula. As a result, Carter relieved Singlaub of his command and ultimately forced him to retire. Singluab associated himself with the far-right activities of the John Birch Society and other extremist groups.

As far right as were the politics of Walker, LeMay, and Singlaub, for the most part and unlike General Flynn, they tended to work within the political system. Flynn’s calling for a free and U.S. presidential election to be overturned and a military regime to take over running a new election is straight out of the playbook of every novel and film that dealt with a right-wing military coup seizing control over America’s instruments of political power from civilian leadership. These include the novel and film “Seven Days in May,” the television movie “Shadow on the Land,” and the film noir black comedy “Dr. Strangelove.”

Military coups are almost never operations designed to preserve or enact democratic rule. In only three cases have coups been designed to move politics to the center or left: the July 20, 1944 unsuccessful plot by German military commanders to assassinate and overthrow Adolf Hitler’s Nazi government in Germany (Operation VALKYRIE), the 1974 Carnation Revolution in Portugal that ousted a right-wing dictatorship and replaced it with a democratic Socialist-Communist coalition government, and the 1981 military counter-coup that successfully put down the 23-F Francoist military putsch attempt in Spain.

Flynn’s call for a coup in the United States places him in the camp of some of the vilest military fascist tyrants who have seized power in nations around the world. Such regimes were supported by civilian paramilitaries that acted as street vigilantes and thugs against pro-democracy opposition parties and leaders. Such would-be “enforcers” for a Trump/Flynn dictatorship today routinely issue death threats against public health officials, health care workers, state governors, mayors, municipal and county council and board members, and election officials around the United States. Fascist enablers like Trump and Flynn have encouraged their supporters to see those trying to ensure free and fair elections and those trying to protect the health of the public as a common enemy to be dealt with by intimidation and violence.

The world has seen the blood-soaked results of paramilitaries and civilian vigilantes teaming up with military dictators to enforce fascist rule. Trump and his supporters are encouraging a similar alliance in the United States. This unholy alliance comprises neo-Nazis, white nationalists, police officers and sheriff’s deputies, and other various social misfits and dead enders. These are the shock troops for the fascist ideology of Trumpism.

Every fascist regime requires its violent enforcers. For Adolf Hitler and Nazi Germany, the enforcers were the SA (“Sturmabteilung” – the Storm Troopers or “Brownshirts”), the SS (“Schutzstaffel”), and the Gestapo (“Geheime Staatspolizei” or “secret state police”).These paramilitaries were aided by the civilian police. Spanish dictator Francisco Franco had his Falange Militia or “Blueshirts.” Italian fascist leader Benito Mussolini’s power was bolstered by his Voluntary Militia for National Security or “Blackshirts.” Haitian dictator Francois Duvalier, also known as “Papa Doc,” was backed by his personal militia, the “Tonton Macoute.” Chilean dictator General Augusto Pinochet had his Patria y Libertad (PyL) militia. For the Brazilian military junta, vigilante police death squads carried out targeted political assassinations of opponents of the regime (these vigilante police gangs have reformed and now support the far-right president, Jair Bolsonaro). Nicaragua’s fascist dictator Anastasio Somoza relied on his National Guard militia to retain power until the 1979 Sandinista Revolution. Other tyrants and dictators around the world were supported by their own militias and paramilitary brigades of civilians and on-duty and off-duty police.

With General Flynn and his confederates calling for a military coup in the United States, Trump’s paramilitary militia-in-formation is waiting for the call to arms to wage civil war and draw blood on America’s streets. That is the enemy every loyal American now must face and deal with swiftly and with certitude.

The Chaos Theory Behind Fascism

0 thoughts on “Right-Wing Generals Calling for a Military Coup: A Long History”