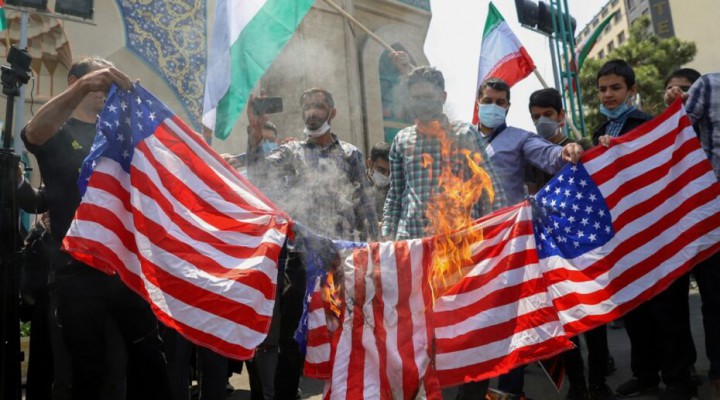 The pretense of American mediation in the Middle East is in tatters. A year after the Abraham Accords, and the world is witnessing another bloody round of ethnic cleansing by the Israelis armed with American warplanes and missiles.

It only took a year for Trump’s “deal of the century” to fall apart for the fraud that it always was. The Arab and Muslim world are enraged by the crimes against humanity committed by Israel against Palestinians in nearly two weeks of violence.

A ceasefire has halted the bloodshed – for now – but the damage to America’s image of peace broker is permanent.

Former U.S. President Donald Trump bent over backward to please Israel. So much for all his bluster about “America First”. More like “Israel First”. Trump recognized Jerusalem as the capital of Israel and gave a green light to continue the annexation of Palestinian land.

Then in a re-election bid, Trump cobbled together the so-called Abraham Accords, a grandiose sounding deal between Israel and Arab countries. This was supposed to be the “deal of the century” which Trump, with his characteristic megalomania, touted as solving the seven-decade-old Middle East conflict. It was a con-job, befitting a wheeler-dealer real-estate mogul who is currently being investigated in the U.S. for corruption.

The Palestinians weren’t even consulted, and in fact, rejected it. Only four Arab countries signed up to Trump’s charade of peace: the United Arab Emirates, Bahrain, Sudan and Morocco. The only seeming concession was a vague promise by Israel to not steal any more Palestinian land. There would be no significant concessions, such as Israel agreeing to the return of Palestinian refugees or recognition of East Jerusalem as the capital of a future Palestinian state.

How duplicitous Trump’s peace-making venture looks now. And how foolish do those Arab nations who signed up to it also look.

The latest violence over the past two weeks has seen Palestinian families slaughtered in their homes as Israeli airstrikes collapse apartment blocks. Medics and hospitals have been attacked. Media centers too. Palestinians say this time the violence is worse than previous rounds of conflict in 2014 and 2009 because the airstrikes are more indiscriminate.

Hamas, the Palestinian militant group, fired thousands of rockets into Israeli cities. But most of them are intercepted by air defenses and Israeli residents are well protected in fortified bomb shelters under their homes. The comparative death toll tells of the one-sided nature of the violence. Over 230 Palestinians, including 65 children, are dead. On the Israeli side, there are 12 dead.

The latest violence erupted because of an Israeli security crackdown on Palestinians worshipping at Al Aqsa Mosque in East Jerusalem during Ramadan last month. Also, the planned eviction of Palestinians from their homes in East Jerusalem led to Hamas firing rockets. As usual, the Israeli military reaction is totally disproportionate.

But Trump’s successor is no less sycophantic. President Joe Biden defends Israel’s right to self-defense in a sickening display of Washington kowtowing. The Biden administration blocked three attempts by the United Nations Security Council to demand a ceasefire. This is while Biden signed off on selling $735 million worth of JDAM missiles to Israel, the very kind of munitions that are making tower blocks in Gaza crumple to the ground.

This background makes a mockery of the Abraham Accords and those Arab nations which signed up after claiming that the normalization deal would prevent further loss of Palestinian territory.

The reality is the United States can never be an honest broker for peace in the Middle East. Whether a Republican or Democrat is in the White House, the American foreign policy is unwavering support for Israel and always at the expense of Palestinian rights. That’s because American imperial interests in the Middle East are predicated on Israeli dominance. The Israeli state has a license of impunity from Washington. It doesn’t matter ultimately if Israel is an apartheid Jewish state that represses Arabs or steals their land or kills their children. Washington is fundamentally all in on the complicity because of its selfish strategic interests.

The pretense of American mediation in the Middle East is in tatters. More than three decades since the Oslo Accord brokered by the Bill Clinton administration has delivered nothing for the Palestinian aspiration of statehood. A year after the Abraham Accords, and the world is witnessing another bloody round of ethnic cleansing by the Israelis armed with American warplanes and missiles.

Saudi Arabia was the intended big prize for American attempts to contrive a normalization of Arab ties with Israel. Given the outpouring of anger among Arabs, Muslims, and many other people around the world, there is no way that the Saudis will back the intended route.

Indeed, the Saudis have toughened their stance this week in support of Palestinian historic rights.

Riyadh is seeking to normalize ties with Iran in part to get a desperately needed peace deal in Yemen where the Houthi rebels are inflicting serious damage to the Saudi economy. The Houthis are supported diplomatically by Tehran and the Saudis need to mend relations with Iran if they are to extricate themselves from the quagmire of Yemen.

Iran is, as usual, staunchly critical of Israel over its onslaught on Gaza. Tehran has condemned those Arab states which betrayed Palestinian rights by selling out to the Abraham Accords.

The Saudis, who were previously showing signs of backing Trump’s faux peace deal with Israel, now have other more pressing concerns with regard to Yemen. This, in addition to popular Arab anger over the latest crimes in Gaza and in East Jerusalem, will make sure that the Saudis put the kibosh on the “deal of the century”. And for Washington, it’s a case of another one bites the dust in its long disreputable history of being a charlatan peace-broker.