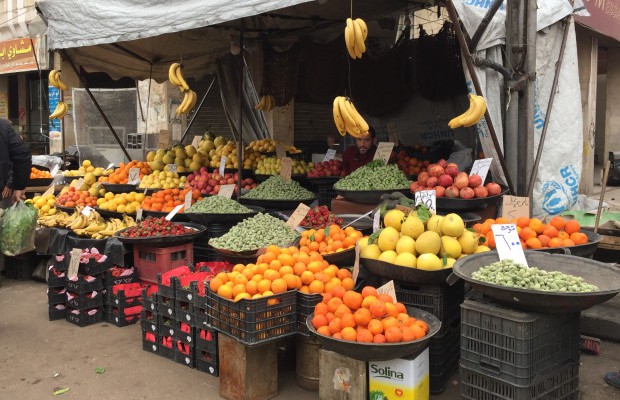 Great day of walking yesterday. I had things to do, but also many pleasant encounters, from morning till late afternoon.

Morning encounters included greeting people I’ve gotten to know in this area–some from 2014, others more recently.

Ran into an older friend, Joseph, who was on his pay to buy pickles from a vendor near Bab Touma square so I walked and talked with him. While we walked, I asked if he knew where I could find incense, so he turned around and led me to a hole-in-the-wall spice shop which indeed sold it.

At the cart selling pickled vegetables, Joseph offered one to me but, although I love strong flavours, pickle is not one of them. I declined saying I preferred maqdous (the gorgeous walnut and chili-stuffed mini eggplants). I should have known better: Joseph then told me he’d bring me some home-made maqdous soon. We parted ways and I as I waited for a friend to join me, I watched life go on around me, albeit much quieter than usual.

I was curious about bakeries, whether they were functioning, whether they were producing enough bread—mainly due to the tweet of an Istanbul-based war propagandist recently, who claimed the government isn’t supplying bread and people are forming long lines in desperation.

Well, that is patently not true. You will see lines around government bakeries, but I’ve seen that always here, nothing new: because the government-subsidized bread is so damn cheap (50 Syrian pounds/big bag of bread) that people are willing to stand and wait for their turn.

So with a friend, we headed to one of my many government subsidized bakeries in the area to find no lines: a few days or more ago, the government started a distribution program, to cut down on people lining up in public these days.

This was explained to us by men we met outside a bakery that makes government-subsidized bread.

To prevent crowds, the government has for each neighbourhood someone responsible for distributing bread. The families are registered, including the number of people. For every 3 or 4 people, they receive 8 pieces of bread, etc.

Each bag of 8 pieces is 50 liras. Currently, the blackmarket rate for the Syrian pound is around 1000 liras to the US dollar. So 50 liras is a negligible amount of money, even for the poorest families.

“I bought this fine bread today, no waiting lines And for the value for money, I imagine you and your whole family would fight to secure a position in line if it’s available in your country. ” ~@iadtawil (Twitter)

In walking around, I came across a food market (souq al-Thawra) that was full of beautiful produce and life, and where I picked up some healthy looking vegetables, and a hyacinthe plant, one of my favourites.

We went to a mall in Kafr Sousa, curious to see how well stocked the grocery store inside was. It was very well-stocked, ample amounts and varieties of breads, produce, sweets, coffees…

We continued on to the Mouhajereen district where my friend lives, passing full bakeries with short lines of people.

Everywhere I went, I saw bread available, mostly private bakeries, but nonetheless, available. And again, the government subsidized bread is being distributed around districts, as I later saw in videos sent to me and online.

I wanted to go to the exact area in question that the war propagandist had tweeted (from Turkey) about, however there are restrictions on traveling between cities and countryside now, the governments initiative to reduce the possible spread of Corona. So, while I’m not able to go to that district, what I can say is that the photo she tweeted about neither shows a long line, nor depicts her claims.

What struck me later, as I reflected on the mood in the morning, was how nice it was walking, greeting people, hearing Joseph bantering with others from the neighbourhood… it was all just so…normal.

No chaos, no hysteria. Far less people on the streets than normal, of course, but calm and pleasant otherwise.

Also, while I do make sure to get exercise and sun every day, again so important for the health, much of my walking had been utterly alone, except saying sabah al khayr once in a while to a lone person I passed. Days of only this and no meaningful talk was starting to eat away at me, subconsciously, so it was refreshing to chat with Joseph and then with the friend that walked around with me yesterday.

Finally, a treat: footage I’ve taken in walks around Damascus, edited and put to music by “Syria Rebuilding“.

0 thoughts on “March 31 updates from Damascus”