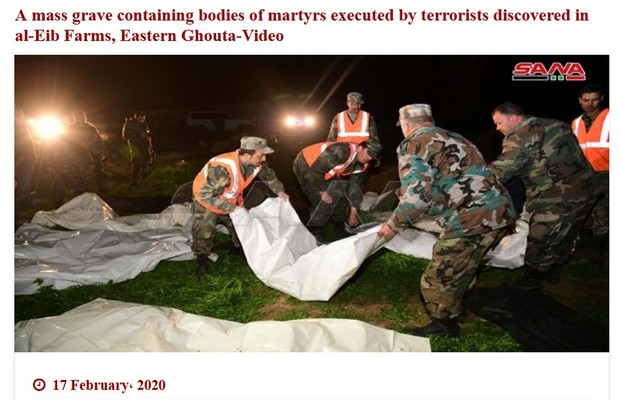 Not for the first time I write about this sordid reality.

From the very beginning of the war on Syria, from early 2011, terrorists (then dubbed “unarmed protesters”) have slaughtered Syrian civilians, military and government employees (including famously throwing the bodies of slain postal workers from a post office rooftop).

In a 2015 article, I detailed some of the many early atrocities and massacres carried out by so-called protesters.

And now this latest sad revelation, of a mass grave found in eastern Ghouta, containing around 70 bodies.

“…a mass grave was discovered in the area of al-Eib Farms, southeast of Douma City in the Eastern Ghouta that contains corpses of civilians and army personnel including a woman, as they were handcuffed and they had been executed by terrorist groups after kidnapping and abusing them and most of them were buried in the same hole.

Mansour indicated that the approximate number of bodies that have been recovered is about 70 martyrs, and their death goes back to between the beginning of 2012 until 2014

Dr. Ayman Khallou, a forensic doctor at Tishreen Military Hospital, pointed out that most of the remains recovered today were handcuffed and two of them were identified.

Khallou added that the Initial forensics indicated that most of the martyrs were executed by gunshots in the head, and some were executed with cables…”

“…Mahmoud Souliman Khaled, 28, from Douma, spoke of his imprisonment and torture by Jaysh al-Islam.

“They stopped me at night, I was on my way to get something. They suspected that I was working for the regime, helping the army. They took me to al-Taoubah prison, where they tortured me. They would tie me to a chair and shock my hands or the top of my toes. They would tie two wires to my toes then plug the other end to the inverter and shock me. They would keep doing that until you confess to something. I didn’t confess, because I had nothing to confess to. They tortured me for two days. What they did caused me to have a severe myopia, it felt like electricity came out of my eyes.”

“Terrorism, they are the literal meaning of terrorism,” Toufik Zahra, the stand owner, said.”

In Madaya, a hillside town northwest of Damascus which made the news quite a lot in 2016, when corporate owned media were pushing a false narrative that the reason civilians were starving was due to the Syrian and Russian governments withholding aid. That was patently false, and when I went there after it was liberated of terrorists, indeed residents told me there was plenty of food and aid, but only for the terrorists who controlled it.

In Madaya I saw a makeshift prison, with a torture room. From my article:

“…Two rooms, metal doors welded onto the entrances, had been used as cells. In the middle of another room, a metal bed frame with a piece of cloth tethered at one end.

“They interrogated and tortured people here,” a former FSA militant said. An unwilling participant, he said he was forced by other militants to join, and that he was among the first to take the government-offered amnesty when peace was restored to Madaya in May 2017.

In neighboring Buqayn, Ahrar al-Sham transformed the municipality building into a prison, fortified with sandbagging and bricks. The dank cells were sealed with the same solid metal doors.

A soft-spoken employee of the municipality, limping as he walked, came over to tell me how he was shot at close range. Leaning on a crutch with prayer beads wrapped around the handle, he explained his injury. Recounting that terrorists had shot at the truck he and three others were in, he said, “the driver was killed and we were all injured. … We were subject to shooting many times.”

The reason for the attacks? To intimidate them from returning to work at the municipality. Three surgeries later, still needing another, the man said his wounded leg is now seven centimeters shorter than his good leg….”

In eastern Aleppo, similar realities played out. From my 2017 article:

“… in the Eye Hospital complex, I passed a building marked as the headquarters of the Tawhid Brigade, and a building marked on an outside wall with the writing, “The Sharia court in Aleppo and its countryside,” before entering and descending to another underground prison.

It contained the same tight solitary confinement cells as in Lairamoun, as well as many dank, windowless, concrete rooms serving as mass cells for the unfortunate Aleppo residents imprisoned by the terrorists.

Prisoners’ writings, with dates, on the walls showed that at least some of them were held in this dungeon for over a year. The fate of some prisoners was execution, depending on the perverted rulings of terrorist judges.

Western media played down the militarization of hospitals in Aleppo by al-Qaeda affiliates.

Independent British journalist Vanessa Beeley visited the hospital complex-turned-prison in April 2017 and interviewed a man who had been imprisoned for seven weeks by Jabhat al-Shamiya (the Levant Front coalition of al-Qaeda and Salafi terrorists) because he talked about how bad conditions were in East Aleppo, under the terrorists.

Beeley told me some of what the man, Ahmad Aldayh, a shopkeeper, had told her:

“I was eyewitness to one execution: A young man, the only child in his family, was arrested because the terrorists found on his mobile phone a photo of his friend holding the Syrian flag. They tortured him for more than four hours and then executed him.

We were all treated very badly. One woman begged three times for food and said she was starving. The warden ordered the prison guards to torture her for three hours as punishment for complaining. Just before the SAA fully liberated the area and the Eye Hospital on the 4th December 2016, 22 other prisoners were executed. They were all shot. They were also about to throw another prisoner off the roof of the building but the SAA advance was so fast they fled without killing him.”…”

Finally, although sadly I could go on with more and more examples, I’ll close with terrorists’ April 7, 2014 assassination of Father Frans van der Lugt.

From my 2014 article after going to recently-liberated Old Homs, where civilians I met spoke also of being starved by terrorists who occupied their area. Other civilians told me of the assassination of the priest:

“Nazim Kanawati, who knew and respected  the Jesuit, arrived moments after the 75-year-old priest had been shot  in the back of the head.”

“Father Frans was a peace-maker and  played an important role in arranging the evacuation of civilians from  the Old City during the siege. He was trusted by both sides, and didn’t  distinguish between Christians and Muslims. He was concerned with  humanity.”

Like Father Frans, Kanawati refused to  leave Homs while others fled. “I didn’t want to leave, I’m a Syrian, I  had the right to be there.”

Although he chose to stay in the Old City, Father Frans was critical of the insurgents. In January 2012, he had written:  “From the start I saw armed demonstrators marching along in the  protests, who began to shoot at the police first. Very often the  violence of the security forces has been a reaction to the brutal  violence of the armed rebels.”

“People in Homs were already armed and  prepared before the protests began,” said Kanawati. “If they hadn’t been  planning for the protests from the beginning, the people wouldn’t have  had the quantity of arms that they had.”

No one expected the priest himself to be  killed, Kanawati attested. “Someone who was probably in his twenties  came here, his face covered, came and ordered Father Frans to go with  him. Father Frans refused. So the man told him to sit on this chair, and  shot him in the head.”

“Three or four days before Father Frans  was killed, the Syrian army had targeted a vehicle filled with  explosives, which the insurgents were planning to send into the city.  Many of the insurgent leaders killed were less extreme that the foreign  insurgents, and had been protecting the church. After their deaths, the  other insurgents went to the church and demanded Father Frans hand over  the valuables residents in the area had left with him for safe-keeping.  He refused, so they killed him.”