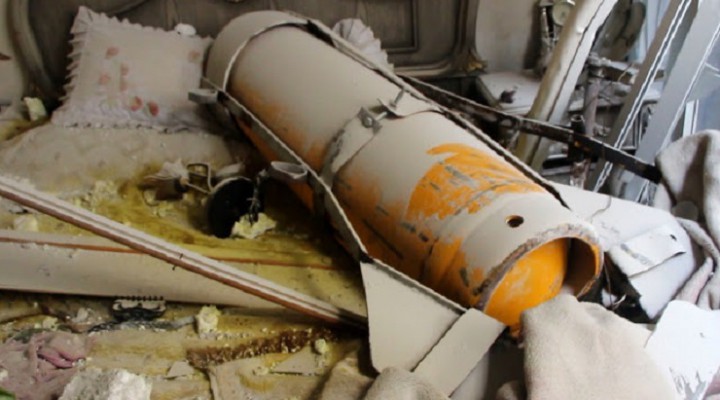 Further evidence has emerged indicating that the alleged 2018 Douma, Syria chemical attack was staged by US-backed militants, not the Syrian government.

With the US plotting war from South America to the South China Sea, understanding how US-backed militants staged the attack, allowing the Western media to sell US military intervention to the global public based on a lie – will help guard against similarly staged attacks in the near future.

Recent revelations mean the US not only falsely accused Damascus of having carried out the attack – but launched military strikes against Syria based on an entirely false pretext. To date, the US has categorically failed to produce any convincing evidence backing their original claims.

Conversely, a subsequent investigation carried out by the Organisation for the Prohibition of Chemical Weapons (OPCW) produced damning evidence suggesting a false flag event was carried out by US-backed militants. This included a chlorine gas cylinder found in a militant weapons workshop inspected by OPCW investigators closely matching the two cylinders allegedly used in the 2018 Douma attack itself.

While US-backed militants insisted two gas cylinders were dropped on Douma by government helicopters, the OPCW noted that the alleged craters caused by the cylinders’ impact matched those on nearby buildings clearly caused by high-explosive ordnance.

The final OPCW report regarding the Douma incident claimed:

The [the OPCW Fact-Finding Mission in Syria] team noted that a similar crater was present on a nearby building.

The implication is that the cylinders may not have created the craters attributed to them by US-backed militants and the Western media supporting their version of the story. Instead, it implies that the cylinders were manually put into place near preexisting craters created by conventional ordnance. While the final OPCW report included photographs of damage on the adjacent building, it did not elaborate further or explore the obvious implications of similar craters seen nearby explicitly.

Experts were consulted to assess the appearance of the crater observed at Location 2, particularly the underside. The expert view was that it was more consistent with that expected as a result of blast/energetics (for example from a HE mortar or rocket artillery round) rather than a result of impact from the falling object. This was also borne out by the observation of deformed rebar splayed out at the underside of the crater, which was not explained by the apparent non-penetration and minimal damage of the cylinder. The likelihood of the crater having been created by a mortar/artillery round or similar, was also supported by the presence of more than one crater of very similar appearance in concrete slabs on top of nearby buildings, by an (unusually elevated, but possible) fragmentation pattern on upper walls, by the indications of concrete spalling under the crater, and (whist it was observed that a fire had been created in the corner of the room ) black scorching on the crater underside and ceiling.

In summary, observation at the scene of the two locations, together with subsequent analysis, suggest that there is a higher probability that both cylinders were manually placed at those two locations rather than being delivered from aircraft.

The assessment further adds weight to what many analysts concluded at the time when the OPCW published its final, official report on the incident – that the event was staged.

At face value Damascus lacked any motivation to carry out the 2018 attack. It occurred on the eve of total victory for Syrian forces over US-backed militants dug in around the Syrian capital. Syria had used extensive conventional force to overcome militant positions and even if Damascus believed the use of chemical weapons would expedite victory, it is unlikely it would drop only 2 gas cylinders containing a negligible amount of chlorine toward that end.

Conversely – US-backed militants facing inevitable and complete defeat along with a US government in desperate need of a pretext to use military force to slow down or stop the advance of Syrian troops – had every motivation to stage the attack, blame it on Damascus, and lie about it ever since.

If political analysis of the alleged attack exploring the possible motivations of both sides in carrying out the attack weren’t conclusive enough, this recently published OPCW engineering assessment further lays the issue to rest.

Washington’s propensity toward staging provocations as a pretext toward wider war is not confined to Douma, Syria alone. The lead up to the 2003 US invasion of Iraq was predicated entirely on a deliberate lie built atop fabricated evidence.

And the US still seeks to provoke war in Ukraine, in Venezuela, against Iran, and likely again in Syria itself as government forces begin to retake Idlib.

Understanding how US-backed militants staged the Douma attack in 2018, how the Western media lied to the global public in the aftermath to sell subsequent Western military intervention, and how investigators exposed evidence revealing the attack as a false flag operation – will all aid in blunting the political impact of future false flag provocations.

Syria: Is US Fighting ISIS or Liquidating Assets?

US Defeat in Syria: The Wrong End of “Might Makes Right”