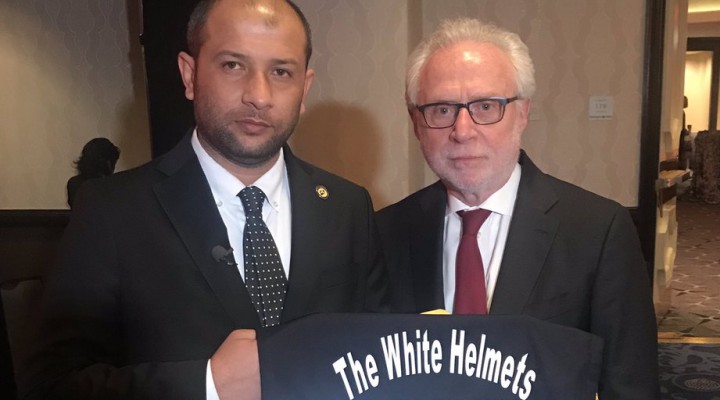 Increasingly, groups and even foreign governments have pandered to Israel and its supporters in the United States because they have come to understand that success in dealing with Washington can be dependent on Jewish support. Last week, Raed Saleh, the leader of the so-called White Helmets, also referred to as the Syrian Civil Defense, a terrorist-affiliated group, was in the United States to “…receive the Elie Wiesel Award from the Holocaust Memorial Museum for his organization’s work in Syria.” He was also dropping by to pick up a check for $5 million courtesy of the U.S. government “…to help us with acquiring ambulances and help us with search and rescue operations.

During his visit, Saleh was treated to a nauseatingly obsequious interview courtesy of National Public Radio, which, inter alia, described how the Helmets “were the subjects of an Oscar-winning documentary two years ago, which captured images of them carrying broken and bloody Syrians from dust and rubble.”

Saleh claimed that the alleged victory of the Syrian regime in the yet to be completed war is an illusion as President Bashar al-Assad presides over a broken country, yet reports from inside Syria indicate that the return of the government to areas formerly controlled by terrorists has been welcomed and refugees from the fighting are now eager to return home. Saleh also claimed, falsely, that his organization has been “providing services to all Syrians and to providing support to all Syrians. Now after six years of war, we have saved more than 116,000 people from under the rubble. We have not asked any of these 116,000 people who did they belong to? Is he a Kurd? Is he a Christian? Is he a Muslim? Is he with Assad? Is he against Assad? Is he with the Kurds? Is he against the Kurds? We have never asked anyone these questions.”

Saleh, whose group has only operated in terrorist-controlled areas, could not, however, maintain his approved narrative. He fairly quickly abandoned his non-partisan quasi-humanitarian rhetoric when asked about how he sees the Syrian conflict developing, saying “We do not call this a civil war, but we rather call it a revolution against a dictatorship…the revolution still goes on. We have not lost.”

Those who are unfamiliar with the White Helmets should understand that the group has been praised by those who hate the government of President Bashar al-Assad in Syria and want to see it removed, which includes the United States, Israel, Saudi Arabia and the Emirates. The White Helmets have played a leading role in the propaganda campaign that seeks to instigate violence or use fabricated information to depict the Damascus government as guilty of slaughtering its own citizens. The propaganda is intended to terrorize the civilian population, which is part of the definition of terrorism.

Favorable media coverage of the group has largely derived from the documentary The White Helmets, which was produced by the group itself and tells a very convincing tale promoted as “the story of real-life heroes and impossible hope.” It is a very impressive piece of propaganda, so much so that it has won numerous awards including the Oscar for Best Documentary Short two years ago and the White Helmets themselves were even nominated for the Nobel Peace Prize. More to the point, however, is the undeniable fact that the documentary has helped shape the public understanding of what is going on in Syria, describing the government in Damascus in purely negative terms.

Nine months ago, with the Syrian Army closing in on the last White Helmet affiliates still operating in the country, the Israeli government, assisted by the United States, staged an emergency “humanitarian” evacuation of the group’s members and their families to Israel and then on to Jordan. It was described in a BBC article that included “The IDF said they had ‘completed a humanitarian effort to rescue members of a Syrian civil organization and their families’, saying there was an ‘immediate threat to their lives.’ The transfer of the displaced Syrians through Israel was an exceptional humanitarian gesture. Although Israel is not directly involved in the Syria conflict, the two countries have been in a state of war for decades. Despite the intervention, the IDF said that ‘Israel continues to maintain a non-intervention policy regarding the Syrian conflict.’”

All of the Israeli assertions are nonsense, including its claimed “humanitarianism” and “non-intervention” in the Syrian war, where it has been bombing almost daily. The carefully edited scenes of heroism under fire that have been filmed and released worldwide conceal the White Helmets’ relationship with the al-Qaeda affiliated group Jabhat al-Nusra and its participation in the torture and execution of “rebel” opponents. Indeed, the White Helmets only operate in terrorist-held territory, which enables them to shape the narrative both regarding who they are and what is occurring on the ground.

The White Helmets were accustomed to traveling to bombing sites with their film crews trailing behind them. Once at the sites, with no independent observers, they are able to arrange or even stage what is filmed to conform to their selected narrative. Exploiting their access to the western media, the White Helmets thereby de facto became a major source of “eyewitness” news regarding what was going on in those many parts of Syria where European and American journalists were quite rightly afraid to go, all part of a broader largely successful “rebel” effort to manufacture fake news that depicts the Damascus government as engaging in war crimes directed against civilians, an effort that has led to several attacks on government forces and facilities by the U.S. military. This is precisely the propaganda that has been supported both by Tel Aviv and Washington.

Perhaps the most serious charge against the White Helmets consists of the evidence that they actively participated in the atrocities, to include torture and murder, carried out by their al-Nusra hosts. There have been numerous photos of the White Helmets operating directly with armed terrorists and also celebrating over the bodies of execution victims and murdered Iraqi soldiers. The group’s jihadi associates regard the White Helmets as fellow “mujahideen” and “soldiers of the revolution.”

For those interested in further details, White Helmet activities have been thoroughly exposed by Maxim Grigoriev of the Russian NGO Foundation for the Study of Democracy. Grigoriev presented his findings at a special meeting of the United Nations just before Christmas 2018. A videoprepared based on the U.N. meeting includes interviews with actual witnesses of White Helmet atrocities and participants in the staged chemical attacks that were blamed on the government.

So Raed Saleh was in Washington to pick up his award and his multi-million dollar check on top of the tens of millions that his organization has already received from Congress and the White House. He also met with a number of Congressmen who support his initiatives and was praised by New Jersey’s own seriously corrupt Israel-firster Senator Robert Menendez of the Senate Foreign Relations Committee who observed “that Saleh’s group of about 3,000 volunteers has ‘saved almost 100,000 lives’ doing ‘courageous work on the ground in Syria, while being targeted by Russia.’” Yes, Russiagate is alive and well.

There is considerable irony in the fact that the National Holocaust Museum, which is taxpayer funded, has given an apparently prestigious award to a terrorist group, something which could have been discerned with even a little fact checking. And the museum also might have been sensitive to how the White Helmets have been used in support of Israeli propaganda vis-à-vis Syria. Perhaps, while they are at it, the museum’s board just might also want to check out Elie Wiesel, for whom the award is named. Wiesel, who was a chronicler of Jewish victimhood while persistently refusing to acknowledge what Israel was doing to the Palestinians, notoriously mixed fact and fiction in his best-selling Holocaust memoir Night. Ironically, the award and recipient are well matched in this case as mixing fact and fiction is what both Elie Wiesel and the White Helmets are all about.

0 thoughts on “Israel’s Terrorists: The White Helmets Receive an Award”