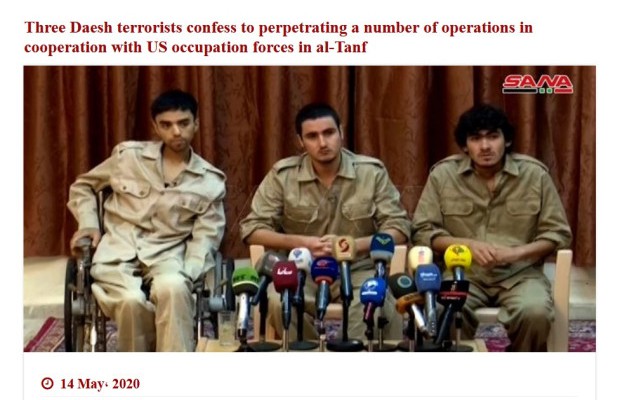 “Through a security operation, that was launched in cooperation with Syrian citizens in al-Badyah (Syrian semi-desert), an ambush has targeted a group from Daesh terrorist organization, including 6 persons.

The security operation ended up with killing three of the groups and arresting the three others.

…The three terrorists, in a program broadcast on the Syrian TV on Thursday, confessed to perpetrating different terrorist operations, inducing acts of killing, execution, abduction, acts of sabotage and destruction of public and private properties.

They confessed that a number of the operations were done in coordination between leaders of Daesh terrorists and the US occupation forces positioned in al-Tanf area on the Syrian-Jordanian borders.”

So when last year I interviewed being evacuated from Rukban Camp, and they told me about the US working with terrorists in al-Tanf region… they were correct, to the silence of the corporate media who attempted to blame Syria & Russia for the extremely harsh conditions and starvation there…

“…As food and water were handed out, I moved from bus to bus speaking with people who endured years-long shortages of food, medicine, clean water, work and education … the basic essentials of life. Most people I spoke to said they were starving because they couldn’t afford the hefty prices of food in the camp, which they blamed on Rukban’s merchants. Some blamed the terrorist groups operating in the camp and still others blamed the Americans. A few women I spoke to blamed the Syrian government, saying no aid had entered Rukban at all, a claim that would later be refuted by reports from both the UN and Red Crescent.

An old woman slumped on the floor of one bus recounted:

We were dying of hunger, life was hell there. Traders [merchants] sold everything at high prices, very expensive; we couldn’t afford to buy things. We tried to leave before today but we didn’t have money to pay for a car out. There were no doctors; it was horrible there.”

Aboard another bus, an older woman sat on the floor, two young women and several babies around her. She had spent four years in the camp: “Everything was expensive, we were hungry all the time. We ate bread, za’atar, yogurt… We didn’t know meat, fruit…”

I asked whether she’d been prevented from leaving before. “Yes,” she responded.

She didn’t get a chance to elaborate as a younger woman further back on the bus shouted at her that no one had been preventing anyone from leaving. When I asked the younger woman how the armed groups had treated her, she replied, “All respect to them.”

But others that I spoke to were explicit in their blame for both the terrorist groups operating in the camp and the U.S. occupation forces in al-Tanf.

An older man from Palmyra who spent four years in the camp spoke of “armed gangs” paid in U.S. dollars being the only ones able to eat properly:

The armed gangs were living while the rest of the people were dead. No one here had fruit for several years. Those who wanted fruit have to pay in U.S. dollars. The armed groups were the only ones who could do so. They were spreading propaganda: ‘don’t go, the aid is coming.’ We do not want aid. We want to go back to our towns.”

Mahmoud Saleh, a young man from Homs, told me he’d fled home five years ago. According to Saleh, the Americans were in control of Rukban. He also put blame on the armed groups operating in the camp, especially for controlling who was permitted to leave. He said, “There are two other convoys trying to leave but the armed groups are preventing them.”

Many others I spoke to said they had wanted to leave before but were fear-mongered by terrorists into staying, told they would be “slaughtered by the regime,” a claim parroted by many in the Western press when Aleppo and other areas of Syria were being liberated from armed groups.

The testimonies I heard when speaking to Rukban evacuees radically differed from the claims made in most of the Western press’ reporting about Syria’s treatment of refugees. These testimonies are not only corroborated by Syrian and Russian authorities, but also by the United Nations itself.”