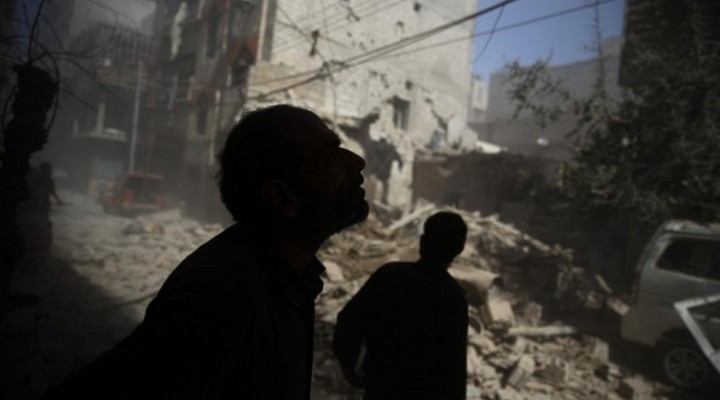 MEE- The UK’s covert propaganda programmes in war-torn Syria were poorly planned, probably illegal and cost lives, according to a scathing internal review of the initiative that has been seen by Middle East Eye.

Using news agencies, social media, poster campaigns and even children’s comics, communications companies working under contract to the British government attempted to undermine both the Assad government and the Islamic State group and bolster elements within the Syrian opposition.

The UK embarked on its propaganda efforts in the country in 2012 and stepped them up dramatically the following year as the government sought to maintain a strategic foothold after parliament had voted against any British military intervention in the conflict.

The series of programmes was given the codename Operation Volute, and those involved in the work talked not of propaganda, but of “strategic communications”, or “SC”.

However, a review that was conducted during the summer of 2016 concluded that the “fundamental shortcomings” of the initiative included “no conflict analysis [and] no target audience analysis”.

The review also reveals concerns within government about the need for the programmes, which were pushed most enthusiastically by the UK’s Ministry of Defence (MoD) from 2013 onwards because of “policy restraints” imposed by the vote against military action.

Too many projects appeared to be completed because “we had to be seen to do things” or were designed to impress the US government, the review concluded.

It concluded that there was a “major risk” that some of the government contractors’ activities were “in contravention of UK law”, although the authors do not spell out how they believe the law may have been broken.

Moreover, so much material was being produced by the propagandists that they had created “a constellation of media outlets”, in which “Syrian audiences and activists got lost and were distracted” and people no longer knew who or what to believe.

The review examined two programmes that were managed by a unit within the MoD called Military Strategic Effects, and two managed by a group within the UK foreign office called the Counter-Daesh Communications Cell.

A fifth was managed by a cross-government programme called the Conflict, Stability and Security Fund (CSSF), which aims to tackle conflicts that threaten UK interests.

Four of the programmes were outsourced to British communications companies, some of them run by former army officers or intelligence officers. These companies set up offices in Istanbul and Amman, where they recruited Syrians to carry out much of the day-to-day work. A fifth was outsourced to a polling company based in the United States.

The five programmes were intended to amplify the work of Syrian citizen journalists; bolster groups that the British considered to be part of what it termed “the moderate armed opposition”; counter violent extremism; and encourage dissent among members of Syria’s Alawite communities, from which the ruling Assad family comes.

Syrian staff recruited further Syrian workers, who were employed as “stringers” inside the country. Many were unaware that the projects that they were working on were being funded and managed by the British government.

Initial blueprints for at least three of the five the programmes were drawn up by an anthropologist working in counter-terrorism for the foreign office in London.

Their combined budgets from the UK government came to £9.6m ($11.9) during 2015-16, with more money earmarked for later years. The review noted that the programmes were intended to be guided by a strategy drawn up by the government’s National Security Council (NSC), but concluded that that strategy was both “weak” and “opaque”.

Many in the British government appeared to be unclear about what strategic communications could and could not achieve, the review found, and among government officials there was said to be “a lack of understanding about what the Syrian audience really wants and thinks”.

There was also said to be “a tension between the behavioural changes the SC programmes envisage (which are long term) and the short-term opportunistic aims of the CSSF programme”.

The review criticises a “lack of coherence” between the different strands of the programme and a “duplication” of efforts. It also highlights the complexity of working with Syria’s ever-shifting opposition forces, warning of “potential credibility damage and/or reputational damage to HMG [Her Majesty’s Government] if links between certain MAO [moderate armed opposition] and UK HMG funding leaks.”

The review addresses the deaths of some of the Syrian staff, but is not critical of this aspect of the work.

It says that that “some IPs [implementing partners] have lost several staff members”. One of the contractors is described as having “suffered losses of core staff that damaged the organisation quite fundamentally”.

One of the communications companies delivering UK government propaganda programmes was said to appear to be “an aggressive commercial organisation” which took both personal and political risks.

“There is a danger that they go too far and therefore take risks that may have an indirect negative impact for those through whom they work,” the review found, adding that there was a need to “rein in” the contractor.

The programme’s stringers and the “moderate armed opposition” on which they were reporting were also acknowledged to have caused unspecified harm: “Stringers or MAO are operating in an environment dominated by armed groups undertaking work which could cause (and has caused) harm following their activities.”

The review acknowledges that concerns were being expressed both inside and outside the programme.

In 2013, it says, the only UK government ministers who had been fully committed to launching new strategic communications programmes in Syria – in the absence of any British military activity on the ground – were those at the Ministry of Defence.

Some in the British government continued to “ask themselves whether taxpayers’ money should be spent on some of the activities of the programme”, while there was also said to be “substantial doubts about the programme among some HMG partners”.

But the UK’s MoD remained enthusiastic, the review said, not least because “the annual cost of the programme (i.e. non-kinetic targeting) represents extraordinary value for money given current policy restraints”.

Nevertheless, the review questioned the costs of the programme, and advised that all of the communications companies were “long overdue an intrusive external financial audit”.

Some of the programmes were intended not only to achieve behavioural change among Syrian audiences, the review noted, but also to gather “very useful” intelligence, particularly on the alliances, tactics and activities of opposition forces.

One of the communications companies was providing intelligence to international military forces based on information provided by a network of 240 stringers working on one online forum.

A key benefit of the propaganda programmes was assessed to be the British government’s “connectivity to different (armed or non-armed) networks”.

However, the review concluded that more thought needed to be given to the balance to be struck between the requirements of the British government and the needs of the Syrian people.

The best way to do this would be “to make sure that the structures that emphasise intelligence gathering are separated from the communications structures aimed at targeting the Syrian audience”.

The review does not question the UK government’s decision to run propaganda programmes in Syria, and says that “focus group discussions, anecdotal feedback and surveys indicate that target audiences bonded with products and took up intended messages, demonstrating that project delivery has been effective”.

Opposition fighters had been given training in international humanitarian law as part of one programme, and one campaign was said to have “brought about behavioural change in pro-regimists”, as it had successfully encouraged them to speak out about the number of people who were being detained by the Assad government.

The UK’s foreign office declined to answer a series of questions about the internal review of its propaganda operations in Syria.

The department declined to say whether the effects hoped for were weighed against the risk to life; how many people died; and whether the UK was supporting their dependents.

It also declined to answer questions about the risk that UK propaganda operations contravened UK law, and would not say whether government ministers had read the review.

Overall, the reviewers regarded the UK’s propaganda programmes as a failure. Asked to give them a mark of A*, A, B or C, the reviewers gave them a B, meaning that they concluded that “outputs moderately did not meet expectation”.