HOME / WORLD / How similar are the US sanctions on Venezuela and the Middle East? 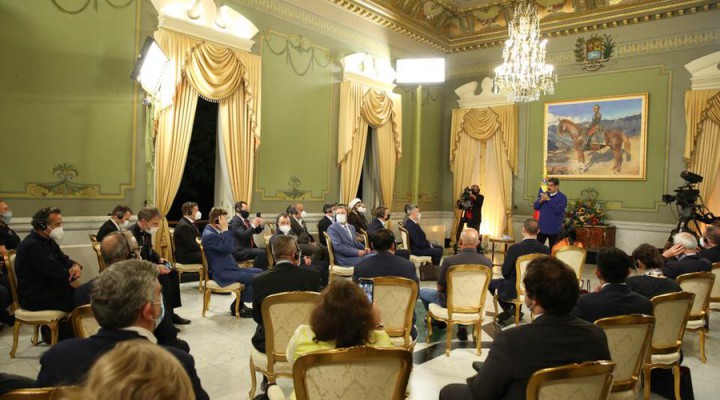 Venezuela is mobilised for this Sunday’s elections to elect 277 members of the Parliament from 14,400 candidates of 107 parties, groups and independents. The US administration and European community leaders have already rejected and condemned the results of the elections- that has not taken place yet. That is because President Nicholas Maduro and his political group are expected to win: they have a guaranteed victory due to the support they enjoy from the population. Washington is accusing Maduro of faking the elections that are due to take place, incredibly unaware that its own house is made of glass and was deeply damaged in the last elections. President Donald Trump accused them of being “fake,” making him the winner even though the country had announced the results of all states, giving overall victory to Joe Biden (and thus Trump’s failure). Now to Venezuela, as doubtless to many others, Trump or Biden are two faces of the same coin. Therefore, Venezuela does not expect any lifting of the sanctions imposed by the Trump administration. That administration enjoyed imposing sanctions in all directions and all over the world against those who refused to submit to his will and that of Israel. Of course, Venezuela is the US’s backyard, and any rebellion against the US’s will is unacceptable. Rebellion here means non-obedience and loyalty to Uncle Sam.

What the US administration did to Venezuela represents decades of practice already exerted on the rest of the world and in particular on the Middle East (Iran, Syria and Lebanon). Illegal sanctions are thus imposed on Venezuelan oil, tankers, banks, spare parts, medical supplies, food, individual persons, and on all sorts of merchandise. The Venezuelan assets from selling oil have been blocked by the US, and the Venezuelan gold frozen by the UK. These assets were again illegally allocated to support the speaker Juan Guaidó, who the West decided that Democracy imposes to nominate him “the non-elected President of Venezuela”.

Parliamentary Speaker Juan Guaidó: America and 50 other European and non-EU countries decided – under pressure from Washington – to declare him “non-democratic elected president” of the country- because he is “the obedient boy of the West”. As is the case with the “Mujahideen Khalq” organisation in Iran and the investment that Washington spent in Lebanon (ten billion dollars) to undermine and defeat “Hezbollah” by fomenting domestic unrest, the US will not hesitate to establish an “electronic army” and push the Venezuelan opponents of the regime to attack and brainwash readers of all walks of life.

Guaidó went as far as to demand a US armed intervention in his country. These are the US plots used for decades, or else the other option could be a civil war (as in Lebanon). The US accused Venezuela of being a bastion of corruption, forgetting that corruption is not demonstrated as the US’s concern in Lebanon, Iraq and with other Monarchies and Middle Eastern Presidents, allies of the US. But why go so far as to accuse others of corruption when we know that President Trump has already signed an exemption decree for his family to avoid legal prosecution.

On the road to Damascus

0 thoughts on “How similar are the US sanctions on Venezuela and the Middle East?”