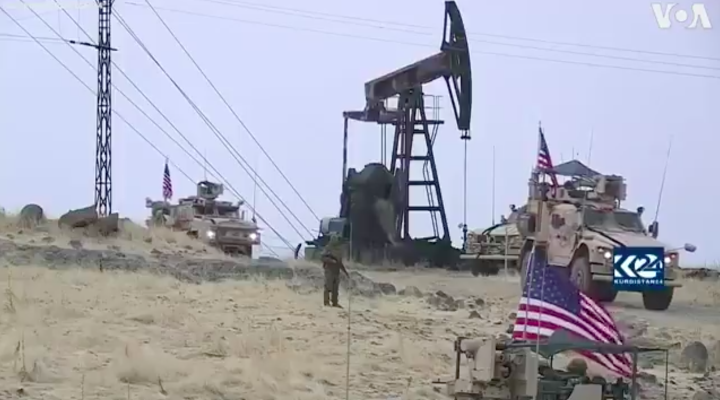 President Trump reiterated to the press today that the United States is maintaining its military presence in Syria not to patrol the nation’s border with Turkey, but to control its oil fields.

“We’ve kept the oil,” Trump said. “We’ve stayed back and kept the oil. Other people can patrol the border of Syria, frankly, and Turkey, let them — they’ve been fighting for a thousand years, let them do the border, we don’t want to do that. We want to bring our soldiers home. But we did leave soldiers because we’re keeping the oil. I like oil. We’re keeping the oil.”

This open “kick their ass and take their gas” policy is nothing new for America’s reality TV president; he’s been saying it for years. It was recently addressed head-on by Syrian president Bashar al-Assad, who said during an interview that it’s nice to have a US president who is honest about America’s true motives in the Middle East for once.

“As for Trump, you might ask me a question and I give you an answer that might sound strange,” Assad said. “I say that he is the best American President, not because his policies are good, but because he is the most transparent president. All American presidents perpetrate all kinds of political atrocities and all crimes and yet still win the Nobel Prize and project themselves as defenders of human rights and noble and unique American values, or Western values in general. The reality is that they are a group of criminals who represent the interests of American lobbies, i.e. the large oil and arms companies, and others. Trump talks transparently, saying that what we want is oil. This is the reality of American policy, at least since WWII. We want to get rid of such and such a person or we want to offer a service in return for money. This is the reality of American policy. What more do we need than a transparent opponent?”

Some establishment media chose to deliberately misinterpret Assad’s scathing criticism of US foreign policy as praise for Donald Trump, with The Hill tweeting out “Syrian President Assad praises Trump: He is ‘the best’ because he’s ‘most transparent president’”, and The Jerusalem Post running the headline “SYRIAN LEADER BASHAR ASSAD: DONALD TRUMP IS THE ‘BEST U.S. PRESIDENT’ — The Syrian leader, who allegedly committed war crimes against his own people to suppress public demands and win a bloody civil war, seemed to approve of Trump’s honesty.”

Many US foreign policy critics have been rightly attacking this administration’s open resource grab; if Russia had forcefully invaded a sovereign nation and seized its oil fields without permission the American political/media class would be shrieking hysterically and working to manufacture support for World War Three within minutes. Yet that is what American exceptionalism leads the empire to do without a second thought.

Assad’s comments mirror what I wrote more than a week ago (so please note that I’m not an Assadist — he’s a Caitlinist), but it’s important to point out that Trump’s oil narrative is just the latest in a long list of excuses that the US government and its apologists have been making to justify the illegal occupation of Syria.

For eight years we’ve been spoonfed an assortment of radically different narratives explaining why the US needs to control Syria militarily, and it turns out that the US and its allies have been plotting to control Syria since long before then. This is because Syria occupies an extremely geostrategically valuable location that is in no way limited to its oil fields. In 2004 Assad launched his “Five Seas Vision”, a plan to use Syria’s supreme location to place itself at the center of a regional energy and transportation system and become an economic superpower. The nation was then plunged into chaos seven years later, but whoever manages to secure control over this location will be able to achieve the same lucrative energy and transportation control for themselves. The dispute over pipeline routes that many have highlighted is just one small example of this. There’s also the illegally occupied Golan Heights which the extremely shady Genie Energy corporation has a vested interest in, and which provides a third of Israel’s water supply, and which the US has decided to officially regard as Israeli property.

So it’s a geostrategically crucial region, and it happens to have no interest at all in allowing itself to be absorbed into the blob of the US-centralized power alliance, allying itself instead with the unabsorbed nations of Russia and Iran. This has made it the epicenter of a giant global imperialist struggle the implications of which stretch far beyond its borders to the rest of the world.

This is the real reason why half a million Syrians have died in an imperialist proxy war, and why many more Syrians continue to suffer under US-led sanctions and the deprivation of their nation’s valuable natural resources. Not because of humanitarianism, not because of democracy, not because of chemical weapons, not because of Iran, not because of Kurds, and not even really just because of oil, but because there’s a globe-spanning oligarchic empire to which Syria has refused to submit. Everything else is empty narrative.

Whenever you see anyone arguing for keeping troops in Syria that aren’t there with the permission of the Syrian government, this is all they’re really supporting: a campaign to annex a strategically valuable location into the US-centralized empire. This is true regardless of whatever reason they are offering for that support. And notice how all the different reasons we’ve been inundated with all appeal to different political sectors: the oil and Iran narratives appeal to rank-and-file Republicans, the humanitarian arguments appeal to liberals, and the Kurds narrative appeals to many leftists and anarchists like Noam Chomsky. But the end result is always the same: keeping military force in a location that the empire has long sought to absorb.

By providing many different narratives as to why the military presence must continue, the propagandists get us all arguing over which narratives are the correct ones rather than whether or not there should be an illegal military occupation of a sovereign nation at all. This is just one of many examples of how the incredibly shrinking Overton window of acceptable debate is used to keep us arguing not over whether the empire should be doing evil things, but how and why it should do them them.