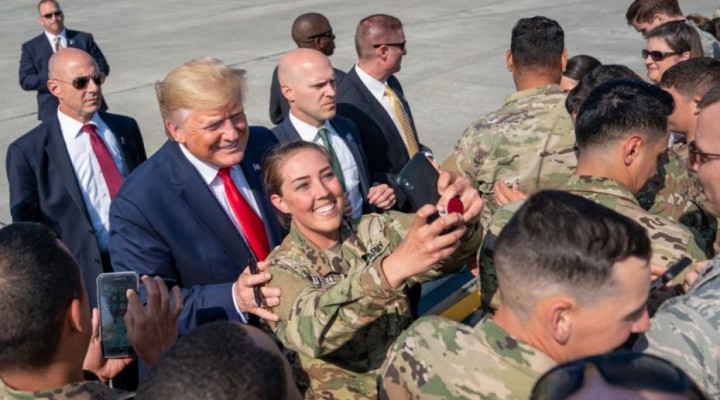 This is no doubt what Trump meant when he alluded to “securing the Oil” in Syria. In that way, President Trump and the NY Times are admitting that the real purpose of American military being in Syria is for imperial conquest.

From extraordinary candid admissions made separately by US President Donald Trump and the New York Times, there can be no illusion about what American forces are really deployed in Syria for. It’s an illegal occupation against the Syrian government and in particular to deprive the Arab country of its oil resources.

Subsequently this week it is being reported that the Pentagon is to deploy Abrams tanks and other heavy equipment to the oil fields near Deir Ez-Zor. The troops involved for such a new deployment would far outnumber the 1,000 or so soldiers that President Trump had said were “coming home”.

The oil fields of Syria are located mainly in the eastern provinces bordering with Iraq. Those areas (about a third of the country) are the last-remaining territory still outside of the control of the government in Damascus. The Syrian state will need to recover its oil fields in order to fund the reconstruction of the nation after nearly eight years of war.

In a tweet last weekend, Trump stated: “USA soldiers are not in combat or ceasefire zones. We have secured the Oil [sic]. Bringing soldiers home!”

The president was referring to the dubious deal he hatched with Turkey last week which resulted in the US abandoning its Kurdish allies and unleashing a deadly offensive by Turk forces against northeast Syria. After incurring much criticism from both Republicans and Democrats, as well as military experts and media pundits for his withdrawal of US troops, Trump is understandably trying to put a positive spin on his move.

Hence he is bragging about having defeated the Islamic State (IS or ISIS) jihadi terror network “100 per cent” and “bringing soldiers home”. The latter is an apparent fulfillment of Trump’s 2016 election promise to “end endless wars” and return American troops home from foreign interventions.

So, what’s that cryptic reference by Trump about “securing the Oil about?” Notice too how he used capital O when writing “Oil”, indicating something strategic about his reference to Syria’s resource. Evidently, the purported defeat of terrorism and bringing troops home is not the full story. The oil oozes out between the lines.

A NY Times’ report on Monday sheds more light on that aspect. Admittedly, the Times is hardly a reliable source, given its embedded links to US intelligence agencies and its trenchant anti-Trump agenda warping almost everything it publishes. Nevertheless, given that Trump and the NY Times appear to be consistent here on the issue suggests that there is indeed substance to the admission.

The Times quotes an anonymous senior Trump administration official and Pentagon sources who say that the president is giving the go-ahead for a small contingency of American special forces, perhaps numbering 200, which are to remain in eastern Syria. That nails the lie that Trump is pulling all US troops out of Syria. He is not “bringing soldiers home”, as he keeps whooping about.

Mark Esper, the US Defense Secretary, also confirmed to reporters on route to Afghanistan last weekend that American forces will transfer to Iraq from Syria and remain near the Syrian border. Esper said the US military would be “defending Iraq” and deployed to prevent a potential resurgence of ISIS. At any rate, that’s the hackneyed official rationale.

However, on the matter of US special forces remaining in Syria, the NY Times reports: “President Trump is leaning in favor of a new Pentagon plan to keep a small contingent of American troops in eastern Syria, perhaps numbering about 200, to combat the Islamic State and block the advance of Syrian government and Russian forces into the region’s coveted oil fields, a senior administration official said on Sunday.”

That is an astounding admission. Forget about “fighting terrorists”, the real objective of US military deployment in Syria is to control the country’s oil resources which are predominantly located in the eastern provinces, where the US had been working in partnership with Syrian Kurdish militia for the past five years. That partnership was supposedly in the name of “defeating ISIS”.

Trump’s cavalier jettisoning of the Kurds in acquiescence to Turkey’s demand for a military attack on the Syrian Kurds, which Ankara regards as terrorists, is a clear demonstration that Washington’s agenda with the Kurds was never really about fighting ISIS, but rather it was about using them as proxies to balkanize Syria’s territory, in particular the oil-rich eastern region.

Trump’s self-congratulations about “ending endless wars” is all disingenuous platitude to drum up his re-election chances in 2020.

This president has been talking about withdrawing US troops from Syria for the past year, yet there are an estimated 1,000 still remaining there, as well as warplanes. The Pentagon has built bases and air fields in eastern and southern Syria near the border with Iraq. The troops moving out of Syria are taking up positions in neighboring Iraq from where they will conduct counterinsurgency operations, no doubt intended to maraud into Syria when desired.

Trump has agreed to keep 150 troops at the US base at Al Tanf in southern Syria, where the camp is a training ground for thousands of jihadist militants known as Maghawir al-Thawra. The Maghawir al-Thawra are not fighting ISIS, as the Pentagon claims. They are more accurately just another proxy for US interests, involved in a nefarious division of labor along with ISIS and the Kurds.

The militants out of Al Tanf can be expected to link up with the 200 US special forces and perhaps some remnant Kurdish mercenaries assigned to “block the advance of Syrian government and Russian forces into the region’s coveted oil fields,” as the NT Times reports.

This is no doubt what Trump meant when he alluded to “securing the Oil” in Syria. In that way, President Trump and the NY Times are admitting that the real purpose of American military being in Syria is for imperial conquest.

A cruel twist is that Syria needs to harness its oil in order to reconstruct from a war launched covertly on that nation by the US and its NATO partners back in 2011. Now, with sickening vindictiveness, the US seems intent on preventing Syria utilizing its own vital oil resources for recovery, by planning an illegal American military occupation of eastern Syria indefinitely.

Many astute observers of the eight-year in Syria always knew that Washington’s agenda was regime change and that its anti-terror claims were a fraudulent pretext. Now we have the US president and America’s leading newspaper owning up to the criminal occupation of Syrian territory and a land grab for oil.