The Season Finale Of The Hit Show ‘Proxy War’ 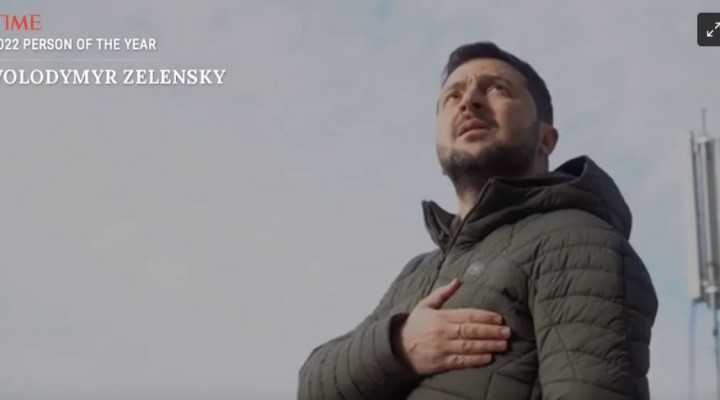 Everyone’s talking about the hit series Proxy War, an astronomically high-budget production based on an actual military conflict whose season finale is set to air this month.

Promotional materials for the episode hint at a heartwarming season wrap-up that’s sure to make wholesome viewing for the whole family, with series star Volodymyr Zelensky being awarded 2022 Person of the Year by Time Magazine.

This will cap off a wild first season which has seen our hero appear on the cover of Vogue, deliver speeches for the World Economic Forum, the New York Stock Exchange, the Grammy Awards and numerous film festivals, as well as having high-profile meetings with celebrity actors and rock stars.

TIME's 2022 Person of the Year: Volodymyr Zelensky and the spirit of Ukraine #TIMEPOY https://t.co/06Y5fuc0fG pic.twitter.com/i8ZT3d5GDa

Proxy War has been a much-needed win for Hollywood, which for years has been largely stuck in a creative rut of meaningless remakes and sequels. A massive PR campaign for a military operation geared toward preserving US imperial hegemony is the biggest thing to hit show business since Spielberg, which is why Zelensky was presented with an Academy Award by actor Sean Penn for his stunning and transcendent performance in the series.

It was unclear in the beginning if audiences would warm to Proxy War, with some taken aback by the unprecedented media coverage being given to a war that their own government was officially not even involved in. Critics initially panned the practice of ascribing Hollywood action hero-sounding quotes like “I need ammo, not a ride” to Zelensky when he never actually said them, as well as the use of blatant atrocity propaganda full of ham-fisted plotlines like Russians raping babies, and the hackneyed plagiarization of the Libya propaganda narrative that the evil leader of the day is giving his troops Viagra to help them commit mass rape.

Of course the "quote of the year" was invented by an anonymous US officialhttps://t.co/J3MRfAzAPx https://t.co/RtWBm6ESPE

But the numbers are in and it turns out the world is head-over-heels in love with Proxy War’s unique combination of reality TV, inspirational storytelling, mind-crushing internet censorship, and high-octane war propaganda. Naysayers may complain that they are tired of having their intelligence insulted, but as far as John and Jane Q Public are concerned, it can’t get insulted enough.

Yes sir, western culture may be a stagnant cesspool of plastic performers, empire smut and corporate rimjobs, but boy howdy we can still spin a good yarn when we need to. Stay tuned for Season Two! Will Zelensky finally get a guest spot on Saturday Night Live? Will leading lady Olena Zelenska release that new fashion line? Will rumors prove true of a Muppet movie in Kyiv? Stay tuned and find out soon, right after this short commercial break.

Is Washington Falling Out Of Love With Zelensky? – with Guest Phil Giraldi

Putting an End to Zelensky’s Follies

Zelensky: the scam of the counter-offensive