HOME / WORLD / Zelensky And Bush To Give Joint Pro-War Presentation 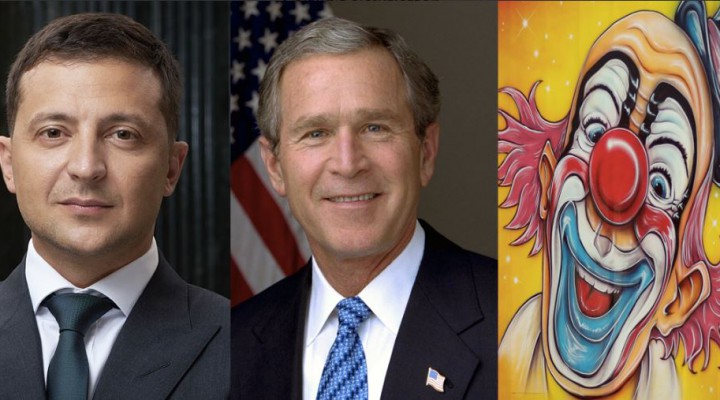 War criminal George W Bush and Ukrainian President Volodymyr Zelensky will be appearing at an event next week at the George W. Bush Presidential Center, in partnership with US government-funded narrative management operations Freedom House and National Endowment for Democracy. The goal of the presentation will reportedly be to address the completely fictional and imaginary concern that congressional Republicans won’t continue supporting US proxy war efforts in Ukraine.

Former US President George W. Bush will hold a public conversation with Ukrainian President Volodymyr Zelensky next week with the aim of underscoring the importance of the US continuing to support Ukraine’s war effort against Russia.

The event, which will take place in Dallas and be open to the public, comes amid questions about the willingness of the former president’s Republican Party to maintain support for Ukraine.

“Ukraine is the frontline in the struggle for freedom and democracy. It’s literally under attack as we speak, and it is vitally important that the United States provide the assistance, military and otherwise to help Ukraine defend itself,” David Kramer, the managing director for global policy at the George W. Bush Institute, told CNN. “President Bush believes in standing with Ukraine.”

The Struggle for Freedom event will take place on Wednesday, in partnership with the Freedom House and the National Endowment for Democracy, at the George W. Bush Presidential Center.

To be clear, there is absolutely no reality-based reason to believe Republicans will meaningfully shy away from full-scale support for arming and assisting the Ukrainian military. The proxy war has only an impotent minority of opposition in the party and every bill to fund it has passed with overwhelming bipartisan support. Some “MAGA” Republicans have claimed that funding for the war would stop if the GOP won the midterm elections, but they were lying; there was never the slightest chance of that happening.

Bush, you may remember, drew headlines and laughter earlier this year with his Freudian confession in which he accused Vladimir Putin of launching “a wholly unjustified and brutal invasion of Iraq — I mean, of Ukraine.” The fact that the president who launched a full-scale ground invasion which destabilized the entire region and led to the deaths of over a million people is now narrative managing for the US empire’s current aggressively propagandized intervention says everything about the nature of this war.

Also appearing with Bush will be the leader who’s slated to become the face of the US empire’s next proxy war, Tsai Ing-wen of Taiwan. CNN writes:

Taiwan’s President Tsai Ing-wen will also take part in the event next week. She will deliver a recorded message, in which she is expected to underscore that the struggle for freedom is a global challenge.

And sure, why not. If you’re going to manufacture consent for proxy warfare against multiple powers as your empire flails around frantically scrambling to prevent the emergence of a multipolar world, you may as well save time and promote them all on the same ticket.

That's how you really know you're onto something there, right, liberals? _Even_ George W. Bush, the worst, stupidest, America-and-lots-of-other-places destroying piece of shit on the planet agrees with your interventionist foreign policy. Ya dummies. https://t.co/X4qXt8zPjw

Many people who support the US proxy war in Ukraine now recognize that the Iraq war was a horrific disaster, but Ukraine isn’t the good war, it’s just the current war. Western propaganda means people always oppose the last war but not the war that’s currently being pushed by the propaganda of today. The US provoking and sustaining its Ukraine proxy war is no more ethical than its invading of Iraq; it just looks that way due to propaganda.

It is only by the copious amounts of propaganda our civilization is being hammered with that this is not immediately obvious to everyone. In the future (assuming we don’t annihilate ourselves first), the propaganda will have cleared from the air enough for people to look back with clarity on 2022 and realize that they were lied to, yet again.

It’s easy to oppose the last war. It’s hard to oppose current wars as the propaganda machine is shoving them down our throats. Everyone’s anti-war until the war propaganda starts.

Colin Powell could have been US President, but his loyalty to the Bush family overcame his sense of duty to the nation