HOME / WORLD / Zelensky: the scam of the counter-offensive

Zelensky: the scam of the counter-offensive 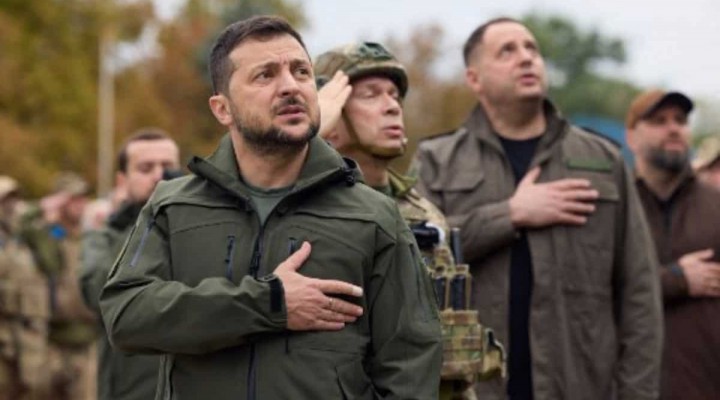 President Zelensky and his NATO allies have launched a counter-offensive against Russian troops. They chose a place where there were few and that Moscow did not intend to occupy. From then on they can celebrate this victory with fanfare without enemies or battle. Back to a bluff that only convinces those who want it, that is to say the Western public.

Kyiv announced with great fanfare of drums and trumpets a counter-offensive in the Karkiv region, that is to say against the Donbass. The forces supported by NATO managed to “liberate” a strip of territory 70 km long and about 30 deep.

President Zelenski, who went there, to Izium, announced the “near victory” of his country over the Russian “invader”.

The Western press talks about the Russian rout and wonders about a possible plot to overthrow the “defeated president”, Vladimir Putin.

End of the tall tale; an achievement of NATO.

In reality, Western forces never entered the Donbass, nor the Republic of Luhansk, nor the Donetsk Republic. They only recovered territories that the Russian army had conquered, but never occupied. From the start, President Putin announced that he wanted to defend the two Republics of Donbass, but that he did not want to annex Ukraine, which he only intended to “denazify” (i.e. get rid of its “integral nationalists”).

Over time, he announced that he also intended to make the Ukrainians pay for the war they started by annexing the south of their country. Two options then presented themselves to him, either to annex Novorossia, or Makhnovchtchina, the two territories of Russian tradition largely overlapping.

Novorossia, literally “New Russia”, is the Russian settlement conquered by Grigory Potemkin, the lover of Tsarina Catherine II, from the Ottoman Empire. It includes all of the south of present-day Ukraine, including Crimea, up to a small part of present-day Moldova, Transnistria. This territory has never known the horrors of serfdom that Catherine II failed to abolish in her empire. Marshal Potemkin built an enlightened state there, inspired by ancient Greece and Rome. Novorossia was once governed by a French officer, personal friend of Tsar Alexander I, Armand de Vignerot du Plessis, Duke of Richelieu and future President of the French Council of Ministers.

The Makhnovchtchina is the place where, in 1918, the black army of the peasant anarchist Nestor Makhno triumphed. She had managed to free herself from the power of kyiv, then held by Symon Petliura and Dmytro Dontsov, the protector and founder of the “integral nationalists”; whose successors are in power today and whom Russia describes as “Nazis”. The partisans of Makhno, as for them, established a libertarian mode in the South-East of the country corresponding to the ideas of the French socialists of the XIXth century (Charles Fourier, Pierre-Joseph Proudhon) and especially to the influence of Pierre Kropotkine: the creation of self-managed municipalities. The Makhnovshchina was overthrown and its supporters massacred in attacks from both the German Empire, the Ukrainian “integral nationalists” and the Trotskyist Bolsheviks.

The zone which has just been “liberated” by the army of kyiv was included for a moment in one of the largest anarchist countries in the world, that of Nestor Mackhno, but never in Novorossia. The government of kyiv regained, as it did during the interwar period, this small territory.

Seen from the Russian angle, kyiv regained a territory that Moscow had once considered annexing, but which it had finally given up. So there was no Russian army there, just border guards and police from Donbass. They are the ones who fled without asking for their rest. So there was no fight and even less defeat.

Under these conditions, the long dissertations of the Western media on a plot by generals aimed at overthrowing the “defeated” President Putin are pure fiction.

It would be different if Western armies recaptured Kershon, a port on the Dnieper shortly before it empties into the Black Sea. A second operation is planned around the Zaporijjia nuclear power plant. But we are not there yet.

The scam of President Volodymyr Zelenskyy consists in presenting as a battle, an advance of his troops in an unoccupied territory. It allows it to claim additional billions from Westerners, which is why it was launched on September 6. Two days later, on the 8th, around fifty countries met at the US base in Ramstein (Germany) to donate arms to Ukraine  [ 1 ] . With no one having a budget for this, the expenses were advanced by the United States under the Ukraine Democracy Defense Lend-Lease Act of 2022  [ 2 ] . They will pay later, but they will pay what they spend today without counting.

On the 9th and 10th, the Institute for the Study of War revealed details of the advancing troops and the warm welcome they received  [ 3 ] . This staging is swallowed up by the Western press which relays it. But this institute is a haunt of Straussians. It is headed by Kimberly Kagan, the sister-in-law of Assistant Secretary of State Victoria Nuland. Among its trustees are Bill Kristol, former president of the American Century Project, as well as General David Petraeus who destroyed Iraq and Afghanistan.

On the 11th, the Reuters-Thompson Agency assures us that the thousands of Russian soldiers are routed  [ 4 ] . She speaks of a “hard blow for Russia”, while the Russian general staff has ordered the immediate withdrawal from this territory which it does not intend to take charge of. When Donald Trump fired the Straussians from his administration, Victoria Nuland became one of the directors of the Reuters agency  [ 5 ] . The Reuters dispatch is signed by Max Hunder, a former pupil of Eton, the most exclusive school in England. A little later, the British Ministry of Defense confirms its dispatch.

On the 12th the hoax was validated by the New York Times which published a double page to the glory of the brave Zelensky. The Western press relays without thinking.

Lack of luck, when the New York daily appeared, the Ukrainian power stations were all hit overnight by missiles  [ 6 ] . Ukraine is in the dark. The counter-offensive too.

President Putin is exasperated by Western bad faith. He states that, for the moment, Russia has only required a small part of its forces against the “Nazis” in kyiv and that, if necessary, its next actions will be of a completely different magnitude.

The rest of the world with eyes to see—unlike Westerners who only have ears to listen to nonsense—saved a party for the Russian delegation at the Shanghai Cooperation Organization summit in Samarkand .

A contact structure had been created during the Yeltsin era between Russia and China. The head of the Russian government, Yevgeny Primakov, recognized stable borders with Beijing. In 1996, this contact group became an international forum with the States of Central Asia (Kazakhstan, Kyrgyzstan, Tajikistan, Uzbekistan), then just before the attacks of September 11, 2001, it became the current CSO. China and Russia had already realized that the Anglo-Saxons were fomenting trouble in Central Asia. They have therefore jointly developed programs against terrorism and separatism. The sequence of events proved them amply right.

The SCO grew rapidly. India, Pakistan and Iran have joined. Belarus is preparing for it. Afghanistan and Mongolia are observers. 14 other states are partners. It is characterized by a very different spirit from that of Western organizations. In a way, we can see in it the extension of the spirit of Bandung: state sovereignty, non-interference in internal affairs and cooperation.

The OCS reassures and unites. It now brings together a quarter of the world’s population, or even two thirds if we take into account the observer states. We don’t make plans on the comet by crying victory when we settle in an unclaimed and undefended territory.

0 thoughts on “Zelensky: the scam of the counter-offensive”