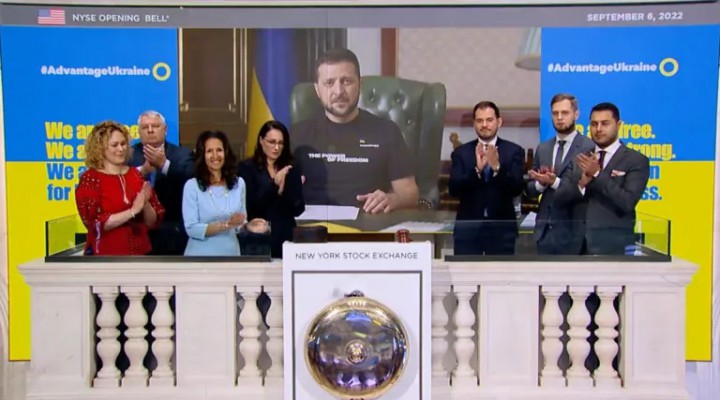 As the Ukraine proxy war triggers economic crisis across the West. Zelensky kicks off a campaign inviting foreign investors to plunder his country while he crushes the labor rights of its citizens.

Ukrainian President and part-time celebrity endorsement-provider Volodymyr Zelensky rang the bell at the opening ceremony for the New York Stock Exchange on September 6.

Zelensky’s virtual arrival to Wall Street was intended as an opportunity to pitch his government’s newly-launched #AdvantageUkraine campaign to investors. The appeal represents a collaboration between the Ukrainian government and WPP, the largest advertising firm in the world.

The president’s Wall Street event coincided with an impending economic collapse in Western Europe, where the European Investment Bank has admitted the Ukraine proxy war could “push many into poverty.” Just a day before Zelensky’s speech, the Euro plunged to a 20-year low after Russia halted gas supplies to Europe in response to Western sanctions.

“We now expect the Euro to fall further below parity (with the dollar) and remain around that level for the next six months,” Goldman Sachs strategist Michael Cahill told Reuters.

Zelensky has repeatedly argued that if NATO does not fork over as much military aid as possible to Ukraine, Russia will attack the West next. And the collective West has eagerly obliged, dumping tens of billions of dollars in military aid into the country and untold sums of financial aid as well. This August, the US sent $4.5 billion to Ukraine through the World Bank to “contribute to sustaining the government’s administrative and service delivery capacity to exercise core functions at the national and regional levels.”

Though a country propped up almost entirely by foreign military and financial support may not seem like the most attractive place for investors, the Ukrainian government has contracted the largest advertising and public relations firm on the planet, WPP, to entice multinational speculation.

WPP boasts on its website that it represents the majority of Fortune Global 500 companies, all 30 of the Dow Jones 30, 62 of the NASDAQ 100, and 61 of the FTSE 100. But with success has come significant scandal.

The public relations titan came in for harsh criticism this February, for example, when it launched a deception-laden campaign to rebrand fossil fuel giants like BP, Exxon, and Shell as green-friendly stewards of the environment. In 2021, the Security and Exchange Commission fined the firm for bribery offenses.

WPP is now waging one of its most ambitious campaigns yet, branding a war-torn country whose government is consistently ranked as one of the world’s most corrupt as an investor’s paradise.

And Zelensky is doing his part by gutting worker’s rights protections as quickly as he can.

On September 6, Volodymyr Zelensky appeared on a large plasma screen in his trademark olive green battle dress-style t-shirt beaming down at the floor of the New York Stock Exchange.

“Ladies and gentlemen,” the Ukrainian president declared to the traders, “freedom has many manifestations but the most important for many is the ability to work for your benefit, for the benefit of your children and the want of your country. Ukraine is a story of a future victory and a chance for you to invest now in projects worth hundreds of billions of dollars to share the victory of us… This will be your victory and a new success story for your companies.”

The New York Stock Exchange quickly shut down replies to its tweets about Zelensky’s speech, a practice to which companies often resort when a controversial or impolitic post inflames public outrage.

NYSE President Lynn Martin also turned off her replies on her Twitter account after commenting on Zelensky’s appearance, “Freedom. Powerful word, many meanings. For us at NYSE, freedom means many things,. It means unfettered access to capital markets.”

Freedom. Powerful word, many meanings.
For us at NYSE, freedom means many things. It means unfettered access to capital markets. It means diversity of thought. It means idea generation, the inspiration for entrepreneurs to change the world. And it means freedom of speech https://t.co/6TMSDVMBCI

This August, Zelensky signed a bill into law that stripped 70 percent of the Ukrainian workforce of its collective bargaining rights. The bill specifically targeted SME’s, or small to medium-sized enterprises with less than 250 employees. These happen to be the same sized companies for which the Advantage Ukraine campaign seeks foreign investment.

Billed by Zelensky as “the greatest opportunity in Europe since WWII,” a deeper look at the Advantage Ukraine campaign reveals an effort to further neoliberalize an economy that has already been heavily plundered by foreign interests since the collapse of the Soviet Union.

Not only is the word “deregulation” plastered across the homepage of Advantage Ukraine’s website, the campaign has essentially proposed to auction off the country’s strategic sectors to the highest bidder.

Following the US-backed Euromaidan coup that saw an elected, Russian-oriented president replaced by force with a nationalist-oligarchic government in February 2014, large sectors of Ukraine’s economy were promptly sold off to the highest bidder.

As Russia scholar Sean Guillory wrote in 2015, “The Ukrainian leadership have shown their unbridled readiness to exchange one master, Russia, for another: western finance and corporate capital… the Ukrainian government is willing, even enthusiastic, to implement reforms prescribed by the IMF not only with the blind faith that they will stimulate economic recovery, but also in the name of ‘European values’, which are now subject to much scrutiny.”

Among the reforms prescribed by the IMF for Ukraine’s post-Maidan regime was the marketization of farmland. As Mitchel Cohen, author of “The Fight Against Monsanto’s Roundup,” explained, the IMF has required Ukraine to reverse its ban on genetically engineered crops and allow multi-nationals like Monsanto to plant GMO seeds and spray the country’s fields with its toxic Roundup.

“In that way,” Cohen wrote, “Monsanto hopes to break the boycott by a number of countries in Europe of its genetically engineered corn and soy.”

It’s easy to understand the affinity from Davos for the Kiev regime when you consider how the US-directed Maidan coup opened Ukraine up to unprecedented pillaging by corporate multinationals like Monsanto and DuPont, which took over Ukrainian agro in 2014 as part of an IMF loan https://t.co/Cn42mbbMRN

Existential Disquiets: Financial War Against the West Begins to Bite

The British Are About to Revolt

Is Russia or Europe the Target of Washington’s Sanctions?